Published March 2nd, 2022 - 07:30 GMT
(Shutterstock/ File Photo)
Highlights
Struggling to breathe, she had been put on ECMO and was sedated during and after his birth and didn't get to meet him

A new mother who gave birth while hospitalized with severe COVID-19 has been reunited with her newborn baby, meeting him for the first time two months after he was born. 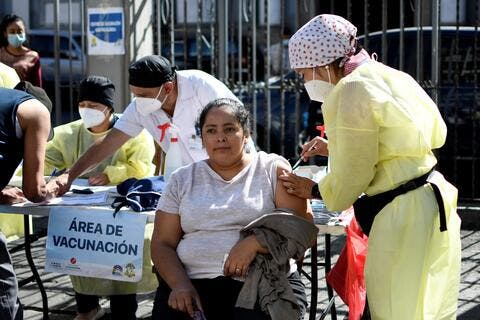 Death Low 15%: What is The Story With Covid in The World?

Macenzee Keller, 20, from New Hampshire, gave birth to her son, Zack, via C-section on November 28, 2021 a day after arriving at the hospital with COVID.

But the first-time mom was critically ill and under sedation, and didn't get to meet her son for the first time until February 3, 2022, once her condition had improved.

'It was very emotional because I was like, "Oh, I got to finally see my baby that I was waiting for so long to see,"' Keller told the AP.

Keller was diagnosed with COVID-19 two weeks before before her due date.

Pregnant and unvaccinated, she was hit hard by the virus, and was experiencing shortness of breath on November 27 when she decided to go to the hospital — which is the last thing she remembers.

She was put on a ventilator at Catholic Medical Center in Manchester, and her baby was born via C-section the next day.

Critically ill, Keller was soon transferred to Dartmouth-Hitchcock Medical Center (DHMC), before getting to meet her son.

She was kept on ECMO for 47 days, which Ciaran Moloney, BSN, RN, a nurse who cared for her, said is 'a lot longer than we’ve seen in the past.'

'There were times when we were wondering how or if she would be able to recover, but over the last few weeks, she’s made an amazing recovery,' he told the hospital's newsroom.

Finally, Keller was able to come off of sedation as her condition slowly improved, but she said waking up was confusing.

'Do you know like when you fall asleep somewhere and then you wake up somewhere new? And you’re like, "Whoa!" That’s kind of what I felt,' she said.

It still took some time until she was well enough to meet her son, but on February 3, she got to hold him for the first time.

By then, Zack was two months old and weighed 11 pounds, 13 ounces.

'It’s a new experience, but I’m excited to become a mom,' Keller said. 'He was big!'

She now wishes she had been vaccinated during her pregnancy, and is encouraging other unvaccinated people to get the shot.

'Now I'm definitely getting vaccinated,' Keller said. 'Definitely get vaccinated. Being as sick as I was, was definitely scary, and I don't want anybody to have to go through that.'

Doctors told Keller she has to wait a couple more weeks before she can do so.

The new mom is still improving, but she still uses a pulse oximeter to measure her blood oxygen levels. She is also getting physical therapy to help her walk again.

But while she is not totally back to her pre-COVID self, her recovery has been a bright spot for medical professionals at the hospital.

'In the medical (intensive care unit), we have a lot of difficult and often tragic stories, and so when we get one like this, where someone has made such an amazing recovery and gets to meet their child for the first time, it’s a real special one for us, and one that really makes it easier to come into work the next day,' Moloney said.

'She went from being completely reliant on the ECMO pump to being fully interactive within just a span of a couple of weeks,' he added.

'My wife, we found out she was pregnant roughly around the same time, and that just made it very emotional for me to see everything that Macenzee was going through,' he said.