Published February 22nd, 2021 - 11:54 GMT
Yodok has a total of 441 reviews with an average rating of 3.7 on the search engine, with many praising the camp's discipline and 'weight loss programme'. (Google)
Highlights
Yodok concentration camp housed thousands of 'enemies of the state'.

Internet pranksters have been leaving joke reviews of a notorious North Korean concentration camp on Google.

The Yodok camp housed thousands of so-called enemies of the state who were forced to carry out slave labour seven days a week and were regularly beaten and tortured. 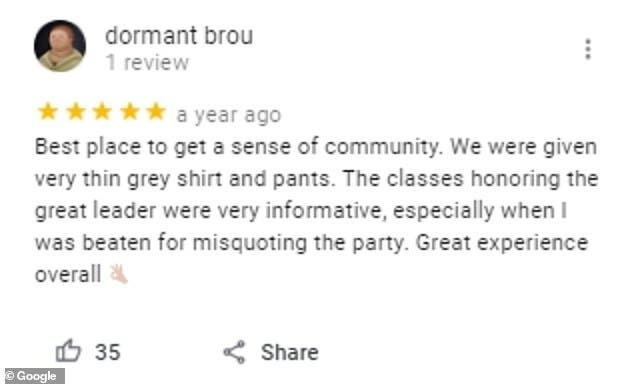 It was closed down in 2014 after international condemnation but some believe the inmates, who were often jailed with all their family members based on 'guilt by association', were moved to a nearby camp.

The Google reviews were posted on Reddit on Sunday after one user discovered the joke write-ups.

Yodok has a total of 441 reviews with an average rating of 3.7 on the search engine, with many praising the camp's discipline and 'weight loss programme'.

One person, who gave the camp five stars, said: 'Food was amazing, atmosphere was great, staff was consistently going above for our needs.

Another wrote: 'Love the quality of the place. The employees were a bit mean and rough but they make up for it with their incredible weight loss program. Would recommend to anyone who is looking for a good vacation.'

One reviewer, writing under the name of 'local guide' Kim Jong Un, said: 'In the glorious Yodok Re-Education Camp, we strive to help reintegrate felons back into our perfect society.

'Through hard work, physical labor, and determination, our inmates are well on their way towards reintegration. Thanks to our diligent and loyal guards, the Yodok Re-Education Camp has suffered 0 accidents or escapes within the past 14 years!

'All hail the Supreme Leader for his compassion and love shown to all citizens of the Democratic People's Republic of Korea!'

Former inmates of Yodok have revealed the daily horrors they faced, witnessing executions and torture while living in squalid conditions.

Kim Young Soon spent nine years in Yodok prison camp along with her elderly parents and four young children, for gossiping about an affair her friend had with Kim Jong Il.

She told Amnesty International in 2014: 'It is a place that would make your hair stand on end.' 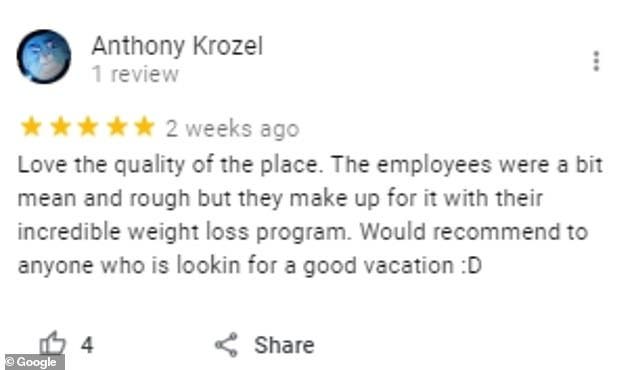 Ms Kim's elderly parents and four children, aged nine, seven, four and one, were also sent to the prison camps for her alleged crime. They all died from starvation and hard labour.

'When my parents starved to death, I didn't have coffins for them. I wrapped their bodies in straw, carried them on my back and went to bury them myself. And the children… I lost all my family,' she said.

A former prison guard also revealed how officials would rape women from the camp and then kill them.

He spoke of the two execution methods used by prison officers to kill inmates. The first involved getting them to dig their own grave and then hitting them in the back of the head with a small metal hammer. The other method involved strangulation with a rubber rope.

Those in the camps would often have to labour from 4:30am until dark, and then attend meetings until midnight.