When the Rev. Martin Luther King Jr. was killed by a single shot while standing on the balcony outside his room at the Lorraine Motel in Memphis, Tennessee on April 4, 1968, America lost the face of the civil rights movement. 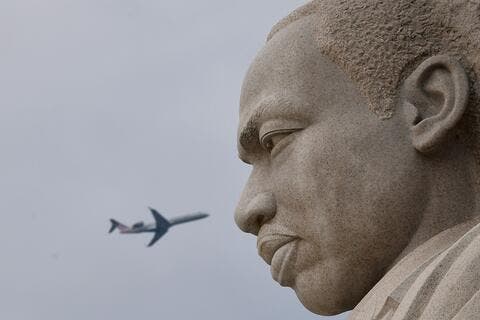 More specifically, the loss of a non-violent voice trying to pull reluctant white Americans toward racial equality and inspire Black Americans to embrace it.

Monday is a commemorative holiday for many Americans, set aside by President Ronald Reagan to remember King and his struggle for equality.

“He inspired Black people to aspire for a better day, and he encouraged Blacks to never give up in the face of inequality and injustice.”

Harvey is qualified to comment on King. He is the author of My C. T. Vivian Story: A Powerful Flame That Burned Brightly, the story of his friend and neighbor the Rev. C.T. Vivian, King’s field general in the civil rights movement of the 1960s.

The Georgia resident also represented more than 180 college students arrested in 1996 in Atlanta during a Black college spring break ritual known as “Freaknic,” which earned him a civil rights award from the Gate City Bar Association.

His summation on the state of race in America carries weight.

“Civil rights have to do with being treated fairly under the law,” Harvey said. “In this regard, the civil rights of Black Americans have advanced from the metaphorical back of the bus to the front seat.”

It is an assessment that jives with the view expressed by King in what is perhaps his most famous speech, “I Have a Dream,” delivered on Aug. 28, 1963 to a massive crowd estimated at 250,000 at the Lincoln Memorial in Washington, D.C. They had come to America’s capital to march for civil rights, an event sanctioned by President John F. Kennedy when he was assured by the organizers, including King, that the march would be peaceful.

“I have a dream that my four little children will one day live in a nation where they will not be judged by the color of their skin but by the content of their character.

“I have a dream that one day this nation will rise up and live out the true meaning of the creed (in the American Declaration of Independence): ‘We hold these truths to be self-evident, that all men are created equal.’"

The film of that speech has been played countless times over the years.

Reagan in 1983 officially declared Martin Luther King Jr. Day a federal holiday, which falls around the civil rights icon’s birthday, but it is a telling statement on racial inequality that some states refused to acknowledge the day. It was not celebrated by all 50 states until the year 2000.

Who was this icon?

King was born on Jan. 15, 1929 in Atlanta, Georgia, the son of a Baptist minister. He helped organize what is considered the first major civil rights protest in America, the Montgomery, Alabama bus boycott of 1955-1956, where Blacks refused to ride buses to draw attention to segregated seating.

King advocated for civil disobedience and non-violent resistance. But the movement was often met by violence perpetrated by whites, most notably southern whites.

Nevertheless, King’s followers stayed true to the non-violence creed and the movement began to grow and capture the attention of Blacks and more liberal whites.

In 1964, the Civil Rights Act was passed. It outlawed racial discrimination in the areas of employment, education and segregation in public facilities, and that same year, King was awarded the Nobel Peace Prize.

But almost 60 years later, the struggle for equality continues.

“There is a racial divide in America,” Harvey said. “There always has been a racial divide, and perhaps there always will be. We can hope that the range will lessen as we get further along in the 21st century.”

Harvey said the future of America depends on cutting out the disease of racial discrimination.

“One thing is for sure: America cannot advance with racism. Racism is like cancer. It will eat away at America until she is consumed in a bloodbath, testing whether America will be the home of white privilege or the melting pot proclaimed by Miss Liberty (Statue of Liberty) standing in the Hudson River off the shores of New York City.”

Two Activists From Jordan and Bahrain Targeted by Pegasus Spyware