The Israel Antiquities Authority said Wednesday that ancient Roman treasure discovered on two shipwrecks off the coast of Caesarea includes a trove of silver coins. 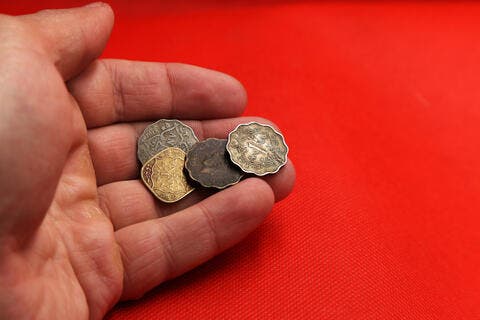 The artifacts include hundreds of silver and bronze Roman coins as well as 560 silver coins from the Mamluk period.

Rare personal effects of shipwreck victims were also discovered, among them "a beautiful red gemstone for setting in a 'gemma' ring. That stone included a lyre known in Jewish tradition as "David's harp," the authority said in a press release.

In 1 Samuel 16:23 of the Bible, King David would play his harp whenever the spirit from God came to Saul. Music from the harp was said to bring relief to Saul.

Another ring, described by the IAA as an "exquisite and rare find," is a thick gold ring depicting an image of the "Good Shepard." It's one of the oldest images used in Christianity symbolizing Jesus.

Caesarea was one of the earliest centers of Christianity, where the Apostle Peter baptized the Roman centurion Cornelius. That was reportedly the first instance of a non-Jew being accepted into the Christian community.

The rich shipwrecks were found by an Israeli Antiquities Authority marine archaeology unit during an underwater survey during the last two months.