Published June 23rd, 2021 - 06:13 GMT
By Noha Abdul.Raheem (Instagram)
Highlights
In Arabic calligraphy, writing proceeds from right to left and forms a horizontal line. Artists rarely confine themselves to convention, though.

Saudi artist, designer and calligrapher Noha Raheem ventured into the world of calligraphy in an unconventional way, fusing her interest in Kanji — the logographic Chinese characters used in the Japanese writing system — with Arabic calligraphy. 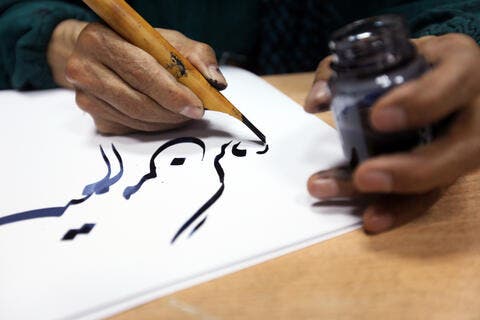 “Any calligraphic font has its roles and system. When I was younger, I discovered the three famous Japanese written scripts — including Kanji, Katakana and Hiragana — and I was awestruck. The impressive vertical letters, the way they are formed and their meaningful symbols were like a secret code.”

In Arabic calligraphy, writing proceeds from right to left and forms a horizontal line. Artists rarely confine themselves to convention, though.

“For Kufic calligraphy and freestyle in Arabic, I was driven by passion. I was inspired by Hajji Noor Deen in my beginnings, and later on, I created Arabic calligraphy in the Kanji style to show the beauty and flexibility of this complex yet innovative mix,” Raheem said.

The self-taught calligrapher discovered the roles and philosophy behind the beauty of Kanji script. “It is said that the only rule for Japanese and Chinese calligraphy is that it is beautiful, no matter what is written. What matters is how it is written. That’s why I believe the Kanji style can be merged and fitted with our Arabic letters to create a masterpiece for both eye and mind,” she said.

She explained that Arabic letters are equally malleable. “They can be shaped in any way, and still keep their form and meaning. Today I wrote my letters in the Kanji style. Later, I might do it in Urdu just to show the world how flexible and beautiful Arabic letters are.”
Raheem’s artworks, including famous sayings and poetry in Arabic, are written freestyle — a tricky task.

She also writes Qur’anic verses in Kanji: “I love to write words that anyone can relate to, including poetry and short verses with iconic and universal messages. I can apply this art to any word, as long as it makes sense to me.”

Raheem is faithful to the cultures she draws inspiration from, using traditional Sumi ink and off-white, antique-style background colors with black script, or vice versa, to mirror the essence of the Japanese style. 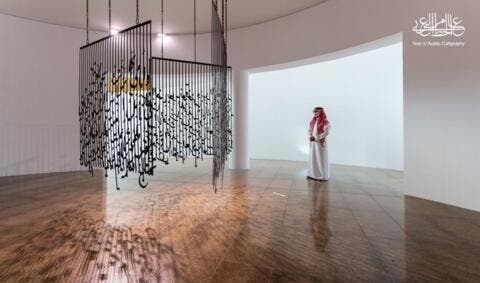 Riyadh Museum Sets on a Timeless Journey With Arabic Calligraphy

Her love for and dedication to Japanese art drove her to share her knowledge and display her works at art cafes, galleries, and sushi restaurants in Saudi Arabia and Dubai.

She encourages other Arab artists to explore the beauty and flexibility of the Arabic language and preserve it through art. Raheem can be found at her Instagram account @noha_raheem.