The Solar Eclipse Will Not be Seen in The Arab World

Published June 7th, 2021 - 07:41 GMT
‘Ring of fire’ eclipse (Twitter)
Highlights
A luminous “ring of light” will surround the moon and the sun’s halo will not be visible.

Next week’s partial solar eclipse will be seen in parts of North America, Russia and Greenland in the first of two polar eclipses this year, but the phenomenon will not be seen in the Kingdom or Arab World. 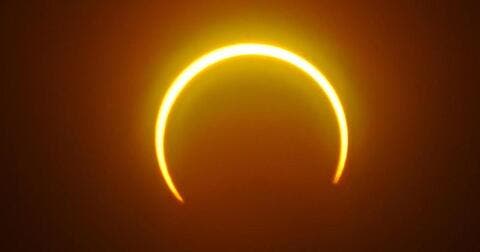 Majed Abu Zahra, president of the Astronomical Society in Jeddah, said that the annual event is a type of solar eclipse that occurs at the start of the lunar month when the Moon covers most of the Sun, leaving only an outer part that looks like a ring surrounding the moon.

Abu Zahra said that observers would be able to see the annual eclipse in the Russian far east, the North Pole, the west of Greenland, Canada and Russia. However, the moon will not fully cover the sun as it will be far from Earth and its apparent size will not be large enough to achieve this effect. A luminous “ring of light” will surround the moon and the sun’s halo will not be visible.

The June 10 eclipse will be visible in northeastern North America, as well as northern regions of Europe and Asia. https://t.co/Y4aauUxFEF