Published June 2nd, 2021 - 08:14 GMT
a rare "ring of fire" solar eclipse (Shutterstock)
Highlights
This was visible from Australia, the US and parts of South America on May 26.

A rare 'ring of fire' solar eclipse will cast a shadow over Russia and Canada next week when the Moon passes between the Earth and Sun, leaving an edge of light. 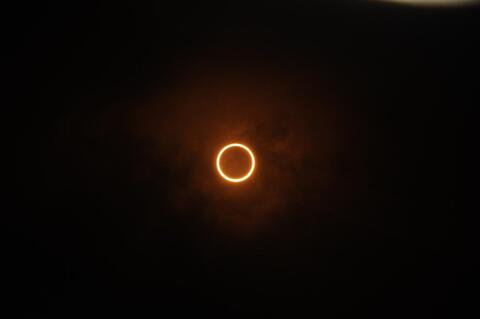 Saudi Arabia Wakes Up to "Ring of Fire” in The Sky

While the UK won't see the 'ring of fire', we will be able to watch a partial solar eclipse where the Moon covers 32 per cent of the sun.

A ring of fire eclipse happens when the Moon is too far away to completely hide all the light from the sun, so a slither is still visible around the edges.

Just two weeks after a lunar eclipse, skywatchers are in for another treat in June: A "ring of fire" annular solar eclipse will be visible in parts of North America on June 10. https://t.co/xXCF8pDEey

The phenomenon will happen on June 10, with the best views available from Canada, Greenland and Russia, visible for a maximum of three minutes and 51 seconds.

British observers will see the partial eclipse, where the Moon appears to take a bite out of the sun, starting at 10:10 BST on June 10 and moving off by 13:21 BST.

Scotland will see the most, with 32 per cent coverage, with London and the south of England only seeing about 20 per cent of the sun covered by the Moon.

Also known as an annular eclipse, the ring of fire happens when the sun, Moon and Earth hit the right alignment.

How to watch next week's rare "ring of fire" solar eclipse https://t.co/TOZDodekg4

For the ring to appear around the edge of the dark sphere, the three stellar objects have to be in alignment, with the Moon at its furthest point from Earth in its orbit.

This year the ring of fire eclipse will follow a Full Blood Super Moon.

This is when a total lunar eclipse coincides with a full moon at its closest point to Earth in its orbit.

This was visible from Australia, the US and parts of South America on May 26.

The ring of fire is best viewed from Qaanaaq, a town in Northwest Greenland, but should be visible across much of Canada and Russia.

People in the Northeastern US will get to view a rarer sight than the ring of fire - a partially eclipsed sun at sunrise.

This unusual and rare sunrise eclipse will be visible up the Atlantic coast, according to astronomers.

Rare 'ring of fire' solar eclipse will cast a dramatic shadow over Russia and Canada https://t.co/S5xsHXs8Ha

From South Carolina and moving north skygazers should look north just after sunrise to spot the Moon taking a bite out of our star as it slowly rises over the horizon.

Philadelphia, New York and Boston will see 70 per cent of our star eclipsed by the Moon during sunrise.

If you do plan to view the eclipse, whether it be the ring of fire, sunrise or the partial eclipse in the UK, make sure you take precautions.

Put on a pair of solar eclipse glasses or look indirectly by watching the shadow on the ground, anything to avoid directly looking at the sun.

A small stretch of coast in the US, in New Jersey and New York, will see 'red devil horns,' also known as the crescent sun.

UK stargazers will see the sun with a 'bite taken out of it' as the highest level of eclipse will be 32 per cent in northern Scotland, going as low as 20 per cent in southern England.

Current forecasts suggest clear skies over much of the UK on June 10 at about 10:10 BST, the point where the Moon will appear to pass in front of the sun. 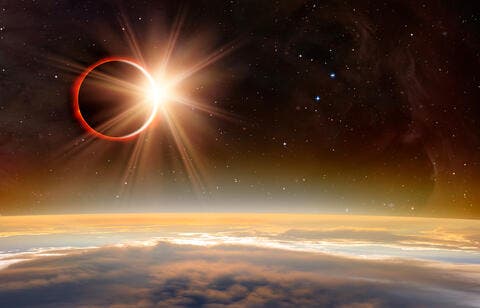 UAE to Witness The First Unusual Solar Eclipse Since 1847

The next partial eclipse after this, visible from the UK, will be on March 29, 2025 when 60 per cent of the sun will appear to be covered by the Moon.