A Texas man facing trial for child sexual assault charges has died after drinking a mysterious liquid during the reading of the verdict finding him guilty. 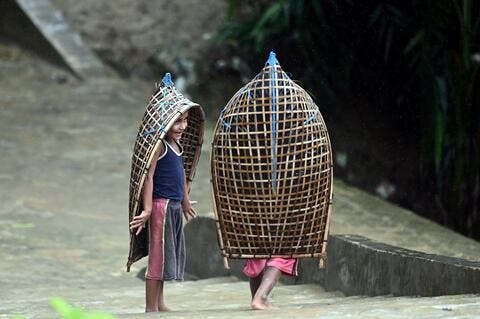 Edward Peter Leclair, 57, was on trial in Denton for five counts of child sexual assault related to one victim when he "chugged" a large bottle filled with what seemed to be cloudy water Thursday, prosecutors told the Denton Record-Chronicle.

Jamie Beck, the first assistant attorney with the Denton County District Attorney's Office, said Leclair had not been drinking from the bottle until the verdict reading at the Denton County Courts Building, about 40 miles northwest of Dallas.

"The jury comes in and takes a seat. The defendant and his counsel stand. The jury hands the verdict to the judge, which she then starts to read," Beck told WFAA-TV in Dallas while describing how the incident started.

"It's during this process that he had a bottle of water with him at the counsel table, and he chugged it. It wasn't like he was just taking sips of water. He was literally throwing it back, so to speak."

After the verdict was read, Judge Lee Gabriel ordered Leclair to be taken to a holding cell next to the courtroom as the court determined when the punishment phase of the trial would take place.

An investigator assigned to the courtroom thought Leclair's behavior chugging the liquid was bizarre and told a court officer he should check on him, the Denton Record-Chronicle reported.

"He was very much either dying or dead," Beck said. "Once the ambulance came, they weren't in a hurry. He was gray."

Beck confirmed to both outlets that the water bottle was taken as evidence.

Leclair, of Frisco, was arrested and posted bond in July 2018 for offenses in June and July 2016. He was found guilty on all five counts on Thursday.