Myanmar's military is torturing children and sexually assaulting women, United Nations investigators said in a new report that outlines evidence of what it calls "systematic crimes against humanity." 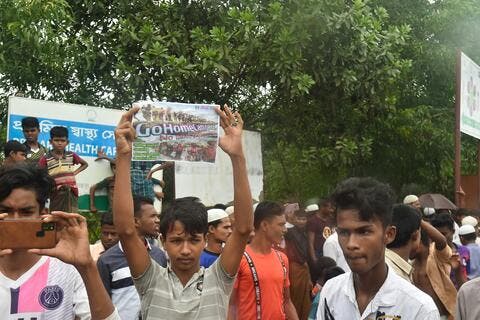 The report, released Tuesday by the U.N.'s Independent Investigative Mechanism for Myanmar, documents accounts of children being tortured, conscripted and arbitrarily detained, sometimes as proxies for their parents.

UN Independent Investigative Mechanism for Myanmar: "There are ample indications that since the military takeover, crimes have been committed on a scale and in a manner that constitutes a widespread and systematic attack against a civilian population." https://t.co/K11z2z10rB pic.twitter.com/LyxJSVQSC6

Attacks on civilians by the military junta, which seized power in a coup in February 2021, have also targeted women with sexual violence including rape, the report said.

"Crimes against women and children are amongst the gravest international crimes, but they are also historically underreported and under-investigated," Nicholas Koumjian, head of the IIMM, said in a statement.

RELATED
Military leaders in Myanmar extend state of emergency for another 6 months
"Our team has dedicated expertise to ensure targeted outreach and investigations so that these crimes can ultimately be prosecuted," he said.

The IIMM, which began operations three years ago, has collected more than 3 million pieces of information from almost 200 sources including interviews, videos, photographs, geospatial imagery and social media content.

Civil disobedience and nationwide protests sprung up immediately after the coup, which the junta brutally suppressed and have since hardened into an internal conflict that some describe as a full-fledged civil war.

Members of the lesbian, gay, bisexual, transgender and intersex community have also been severely impacted by the ongoing conflict, which has "exacerbated their already vulnerable situation," the IIMM report said.

"Since the military takeover in February 2021, crimes have been committed in Myanmar on a scale and in a manner that constitutes a widespread and systematic attack against a civilian population," the report said.

The U.N. investigators noted that the scope of the junta's crimes have also expanded with the execution last month of four anti-coup activists, including a former lawmaker.

"Perpetrators of these crimes need to know that they cannot continue to act with impunity," Koumjian said. "We are collecting and preserving the evidence so that they will one day be held to account."

The UN says the evidence is overwhelming, #Myanmar’s military junta are committing #CrimesAgainstHumanity. The only question now is what will the international community do about it?

My comments on @BBCWorld ⬇️ pic.twitter.com/Uz9JIBXa7i

According to the Thailand-based Assistance Association for Political Prisoners, the junta has arrested more than 15,000 civilians and killed 2,171.

Earlier this month, the military announced that it would extend a state of emergency in the country for another six months, claiming that it must stabilize the country before holding elections next year.