A Day Without Donald Trump on Social Media?!

Twitter has suspended Donald Trump's account for 12 hours and for the first time deleted his tweets after he praised the mob who stormed Congress and said he 'loved' them.

Snapchat blocked him on Wednesday morning, before he filmed the video. The platform said their locking of his account was indefinite.

One of the deleted tweets read: 'These are the things and events that happen when a sacred landslide election victory is so unceremoniously & viciously stripped away from great patriots, who have been badly & unfairly treated for so long. Go home with love & in peace. Remember this day forever!'

In the deleted video, he poured more fuel on the fire, claiming the election was 'stolen' and telling the rioters that he 'loved' them. 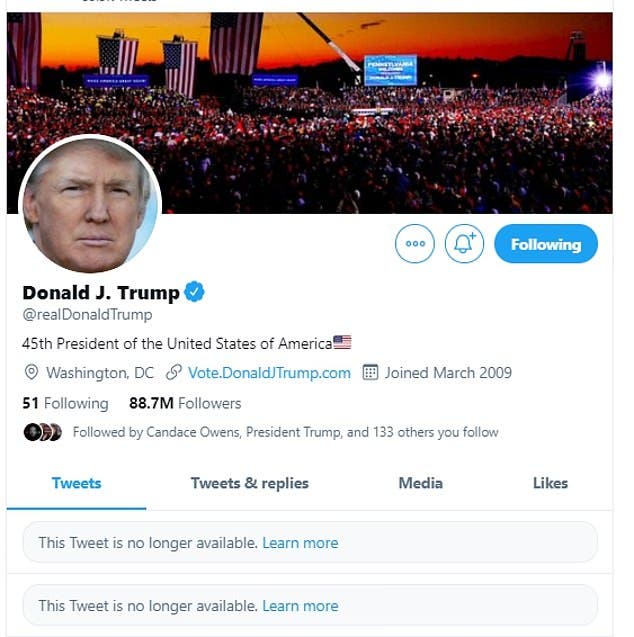 'I know your pain. I know you're hurt. We had an election that was stolen from us,' he said.

Trump said it was 'a very tough period of time,' and emphasized his own personal loss.

'There's never been a time like this where such a thing happened, where they could take it away from all of us, from me, from you, from our country.

'This was a fraudulent election, but we can't play into the hands of these people. We have to have peace. So go home.

'We love you. You're very special. You've seen what happens. You see the way others are treated that are so bad and so evil. I know how you feel. But go home and go home at peace.'

The third deleted tweet, posted several hours before the others, attacked Mike Pence for failing to stop the certification of Joe Biden's win.

'Mike Pence didn't have the courage to do what should have been done to protect our Country and our Constitution, giving States a chance to certify a corrected set of facts, not the fraudulent or inaccurate ones which they were asked to previously certify,' he tweeted.

The video and tweets were removed on Wednesday night.

Twitter showed an image saying: 'This tweet is no longer available', and linked back to their page explaining their rational for blocking or putting warnings on tweets.

'As a result of the unprecedented and ongoing violent situation in Washington, D.C., we have required the removal of three @realDonaldTrump Tweets that were posted earlier today for repeated and severe violations of our Civic Integrity policy,' the social media company said.

'This means that the account of @realDonaldTrump will be locked for 12 hours following the removal of these Tweets. If the Tweets are not removed, the account will remain locked.'

A Facebook spokesman said: 'We've assessed two policy violations against President Trump's Page which will result in a 24-hour feature block, meaning he will lose the ability to post on the platform during that time.'

Andy Stone, another Facebook spokesman, earlier told CNN Business: 'The violent protests in the Capitol today are a disgrace.'

He added: 'We prohibit incitement and calls for violence on our platform. We are actively reviewing and removing any content that breaks these rules.'

Farshad Shadloo, YouTube spokesperson, said in an email to Insider: 'We removed a video posted this afternoon to Donald Trump's channel that violated our policies regarding content that alleges widespread fraud or errors changed the outcome of the 2020 U.S.

'We do allow copies of this video if uploaded with additional context and sufficient educational, documentary, scientific, or artistic (EDSA) value.'

And Rachel Racusen told The Information that Trump's Snapchat account was also locked.

'We can confirm that earlier today we locked President Trump's Snapchat account,' she said in a statement.

He will not be able to share new content until Snap decides to lift the restriction, she said, noting that his account was locked on Wednesday before he posted the video about the 'stolen' election.

Throughout the 2020 presidential election, the platforms placed labels on dozens of Trump's tweets that made false or misleading claims about voter fraud.

However, this appears to be the first time Twitter flagged a tweet as posing 'a risk of violence.'

One woman died on Wednesday when a mob of angry Trump supporters breached the Capitol and entered the House and Senate chambers.

The Senate was evacuated at 2.30pm.

There are more than 2,000 Capitol Police officers with special jurisdiction on Capitol Grounds. But they were overrun as protesters smashed through a window and penetrated the building.

Capitol Police were seen absorbing violent lunges by Trump supporters on the first floor of the Capitol building.

Muriel Bowser, mayor of Washington DC, had already mobilized National Guard troops in advance of the pro-Trump rally billed as a 'stop the steal event' – although it coincided with the effort proscribed in law for Congress to count the votes of the Electoral College.

The entire D.C. National Guard was to be activated within hours, the Washington Post reported, after Bowser asked on duty guard to be sent to the Capitol.