Published June 10th, 2021 - 09:49 GMT
partial solar eclipse (Twitter)
Highlights
'It will be dry for many, particularly eastern areas, whilst western areas and high ground here are more likely to see some light rain and drizzle.'

Skywatchers complained as the partial solar eclipse was ruined by clouds this morning, with overcast weather in southwest England and south Wales resulting in the eclipse being blocked out in some parts of Britain. 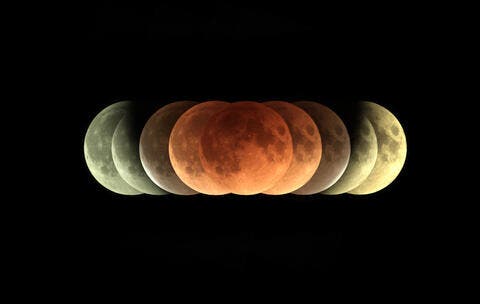 Get Ready to See The Giant Supermoon!

Cloudy conditions and the odd shower are forecast for today with the best sunshine in the east, according to the Met Office. The drizzle is set to continue into tonight with some heavy showers in northwest Scotland.

The dreary outlook landed on the same morning that the sun appeared as a crescent for skygazers in the UK and US. But those in central and south-east England have clear spells to witness the spectacle.

During the event, about 30 per cent of the sun is blocked out in Scotland, 20 per cent in southern England and as much as 70 per cent over Eastern US states.

British and Irish observers can see a crescent sun instead of a ring, and in the US, viewers will be able to see a partial eclipse at sunrise, another rare phenomenon.

Unbelievable good fortune for a break in the cloud during Greatest Eclipse! Then at 11:14 the cloud rolled back over. Wow! 🤩 #SolarEclipse pic.twitter.com/j9s27skw34

Social media users have taken to Twitter to bemoan the obscured partial solar eclipse, posting bleak pictures of dark grey skies and saying the spectacle has been 'filtered by cloud'.

But despite today's gloomy forecast, conditions are set to brighten up for this weekend, which is on course to be the warmest weekend of this year yet and the warmest since the end of last summer.

Views of the partial solar eclipse on Thursday will be 'somewhat fleeting' across certain parts of the UK due to cloudy skies, forecasters have said.

The Met Office tweeted this morning: 'Thursday morning will be a much cloudier one for most, though it will be mild.

'Things will be particularly murky along western coasts and hills where the cloud could be thick enough for some drizzle.'

And Met Office spokesman Stephen Dixon said: 'Thursday morning will see more cloud than recent days over east, south-east and much of southern England though some good breaks are likely with sunny spells.

'Similar conditions are likely over east and north-east Scotland with all these areas having the best visibility of the solar eclipse. There will be clear spells over much of central and south-east England.

'Much of the far south-west of England, Wales, Northern Ireland, western and central Scotland will have more in the way of cloud cover, and whilst this may thin by day, the likelihood is that visibility of the eclipse will be somewhat fleeting.

'It will be dry for many, particularly eastern areas, whilst western areas and high ground here are more likely to see some light rain and drizzle.'

Dr Emily Drabek-Maunder, an astronomer at the Royal Observatory Greenwich, said: 'From the UK, the annular solar eclipse will be a partial eclipse, meaning that we'll only see the Moon pass in front of a small part of the Sun.'

She warned that looking directly at the Sun, even one partially eclipsed, can cause serious and permanent damage to the eyes.

Despite being attacked by bugs, the partial solar eclipse was BEAUTIFUL! This was the first solar eclipse that I’ve ever seen and it definitely lived up to my expectations. pic.twitter.com/WtyTvkhNfQ

Dr Drabek-Maunder added: 'Never look at the sun directly or use standard sunglasses, it can cause serious harm to your eyes.'

It also isn't safe to look at the sun through binoculars, telescopes or a camera lens without specialist filters – so best to avoid taking direct images.

'You can make a projector by poking a small hole into a piece of card,' said Dr Drabek-Maunder, adding you hold the card to the sun so it shines through the hole on to a piece of paper placed behind the card.

'You will be able to see the shape of the sun projected on to the piece of paper and watch its shape change as the Moon passes in front of the sun.'

It comes as a spell of high pressure means most areas will meet the weather service's definition of a heatwave – defined as three days above a particular temperature threshold - this weekend.

Temperatures on Friday, Saturday and Sunday are predicted to see highs around 77F (25C), with Sunday lined up to be the warmest day of the weekend for England, Scotland and Wales, according to the Met Office.

The Met Office's Oli Claydon said: 'There's a definition of what a heatwave is – it is at least three consecutive days of maximum temperatures meeting or exceeding a temperature threshold.

'In Northern Ireland, Scotland, Wales, Devon and Cornwall and the north east its 77F (25C) – so it is a sliding scale depending on where you are, but we haven't yet met that maximum threshold.'

Grass and weed pollen levels are also increasing at the moment, the Met Office tweeted, with the highest levels expected in southern England during the coming days.

Bookmaker Coral has made it odds-on at 1-2 for this month to finish as the hottest June on record in the UK, despite thunderstorms and a drop in temperatures towards the start of this month.

Coral's John Hill said: 'With a glorious summer to look forward to, not only does the betting point to record high temperatures, we could even have a hosepipe ban this year.'

But despite bookies offering odds on this being the hottest June ever, it is too early in the month to say whether we will see record-breaking average temperatures. 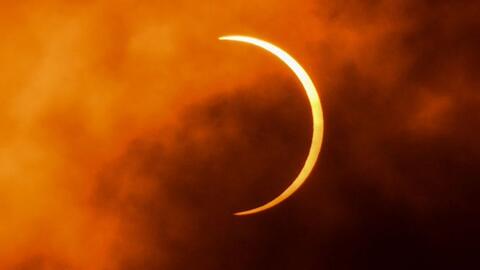 The Solar Eclipse Will Not be Seen in The Arab World

'Currently we are not even in the top five hottest Junes on record,' Mr Claydon said.