Woman Dresses, Undresses in a Journey of Syrian Refugee's Dreamscape 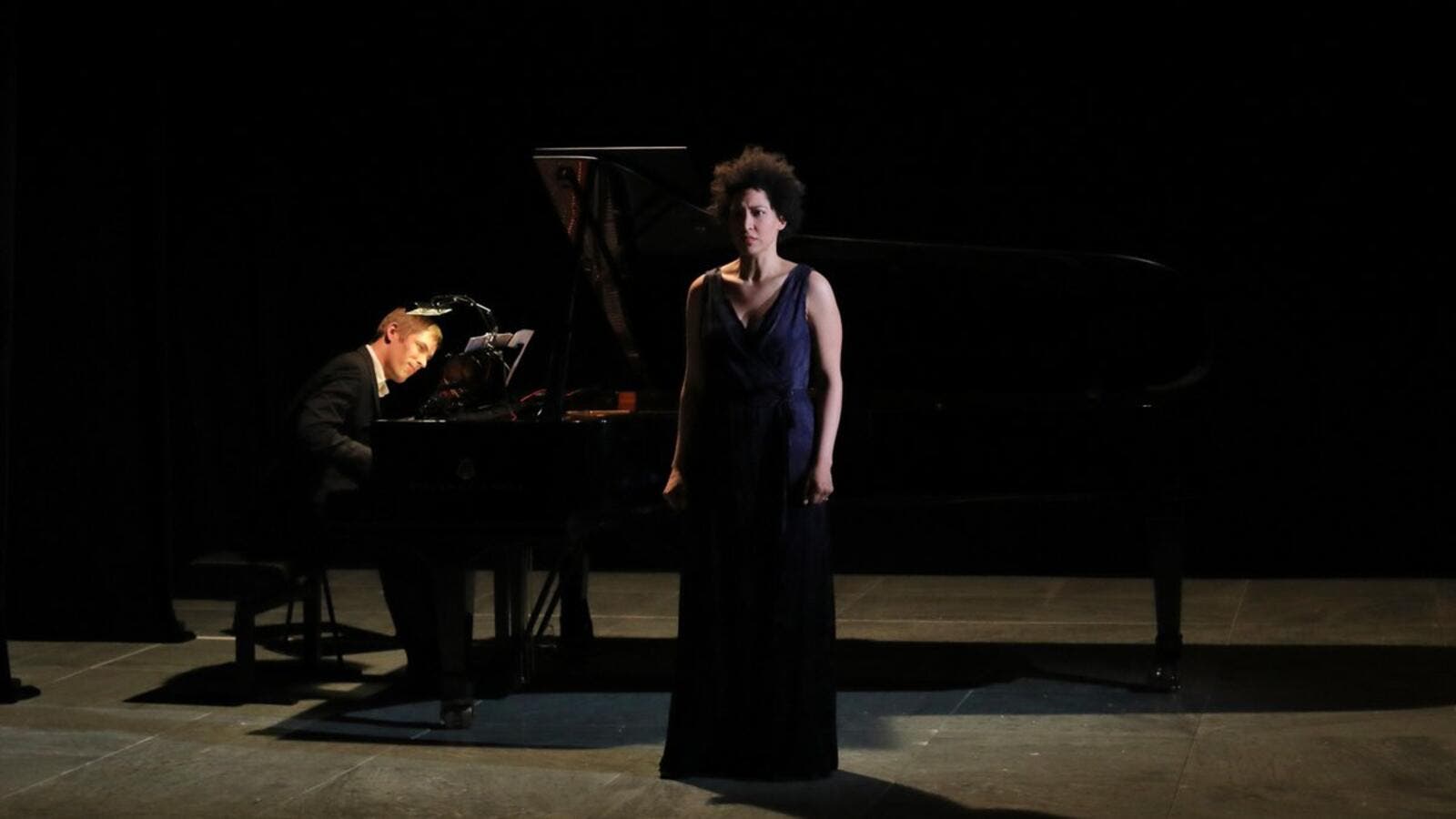 Zauberland opens in the Linbury Theatre (Twitter)
Highlights
It is the nightmare of Syria and the plight of the migrant that are invoked.

A woman is alternately dressed and undressed, embraced and ravaged, blindfolded and released by ominous male figures in black.

But at odds with her on stage environment, she is singing a love song from Schumann's 1844 Dichterliebe, In the Amazing May Time, one of Heinrich Heine's Lyrisches Intermezzo from his 1827 Buch der Lieder.
As soprano Julia Bullock sings from the classic Schumann German romantic canon:

It is the nightmare of Syria and the plight of the migrant that are invoked.

And just as the new Royal Opera House design by Stanton William Architects bridges the 19th century historic Main Stage auditorium with contemporary new performance and rehearsal spaces, so too does Zauberland fuse centuries in its nightmarish yet lyrical landscape.

Literally "Magicland" in German, the opera tells the story of a pregnant women migrant – an opera singer fleeing war torn Aleppo for Cologne.

Before her husband's death, she has a dream in which she is singing Dichterliebe, interrupted by traumatic memories of her flight from Syria and her life in Aleppo before the war.

As director Katie Mitchell writes in the programme notes, "Zauberland explores the relationship between a 19th century romantic sensibility and world view and our 20th century reality of mass migration and violence."

And that it does, with an often dizzying intensity. The score – a blend of Schumann and new composition by Bernard Foccrouille full of dramatic, atonal sound clusters played enthusiastically by pianist Cedric Tiberghien and the text – a mix of Heine and British writer Martin Crimp, (with a little 6th century Arabic poetry and the Song of Solomon thrown in for good measure) conspire to recreate both the fragmented sense of reality and fragile mental state of the refugee as well as our own distracted to death contemporaneous reality.

Added to this is a set design by Chloe Lamford and direction by Katie Mitchell that alternates between a stark minimalism – three chairs, a table that transforms from an interrogation room to a detention centre to a corporate warlord deal making space to a hospital gurney to an autopsy table at a morgue – and theatre of the grotesque.

As the performance within a dream unfolds, there are many surreal yet poignant moments.

At one point a series of blonde barbies encased in glass are wheeled on stage, as the Syrian woman recalls her daughter playing with dolls.

Earlier scenes suggesting villainous men raping and setting fire to women while filming it all on iphones in horrible snuff film meets war zone gestures – seem almost gratuitous – and yet as easily pulled from the headlines of Syrian (or other) war sagas -eerily accurate, as are scenes evoking dangerous boat journeys to "safer" shores.

Still other scenes where Bullock sings Heine's romantic poetry in the midst of chaos and destruction, infusing her character  with both agency and vulnerability, are genuinely moving.

The text itself is a poetic tour de force, a mélange of Heine and Crimp sung in German and English. But lest purists call to arms, the creative team behind Zauberland suggests that it's not entirely ahistorical.

Dichterliebe we are told in the programme notes, was originally a sequence of 20, not the existing 16, songs, and Foccroulle and Crimp have taken the places where the songs were removed as points of intervention and extension.

There are some lovely lines here – and to Crimp's credit there are no abrupt borders between the two writers' voices.

Some are more familiar: "Ah, that magic country
I so often see it in dreams, but when the sun comes up it melts like foam to nothing" – but still evoke the plight of the migrant  trapped at a European border, while some, especially towards the end of the 90 minute opera fuse biblical, German Romantic and contemporaneous references.

The Song of Songs appears in the text, "I am black – and beautiful: (here African-American Bullock's presence offers a potent double meaning) our bed is green
I'm tasting wine and honeycomb/and in my dream
You are my lover who has come from Lebanon" – followed by an overt reference to current extremist misogyny:
"Here is a young man making a rule
He tells a young girl: Cover your hair
Here Is a razor in the pool
When I had to cut out my soul
I threw it there."

In the final scene, surrounded by men who may be rapists, captors, immigration officials or police, Bullock sings, "Today I'm trading nightingales for dollar bills."

In addition to inspiration from recent media reports on migrants in Calais and the Syrian wars, and the film The Death of Aleppo, Crimp's text was also influenced, as he writes in the programme notes, by a desire to show the  "complexity of Europe's relationship with 'the other'" as "starkly revealed in its ambiguous reception of the poetry of Heinrich Heine," the German Jewish writer who while lionized for his work, did not "escape anti-Semitic attack, either during his life, or after it."

Crimp also writes that "European poetry has a rich tradition – but many of its deepest roots are in the near and Middle East" – and to that end his has referenced the Song of Songs as well as "6th century Arabic poem by Malik B. Asma of Fazara."

The latter informs the powerful last lines of the opera: "Your sweet smell of jasmine
Perfumes my bed
Like scent from a hidden garden
Now wake up," the police said.

Zauberland is a production that has so much going on that viewers could easily experience some of the same confusion, fragmentation and indeed trauma of the Syrian protagonist.

But what at times makes for a somewhat overwhelming narrative whirl, works on another level to capture the emotional truth of the life of a refugee, and for this the creative team and indeed the Royal Opera House should be commended.

This is vital, relevant work that speaks to important issues in our world – all the more disappointing that there was not a Talkback programmed at some point in this week's run – or more connections made with local Syrian, Iraqi or other diaspora/refugee communities.

But the emotional and artistic commitment of African-American soprano Julia Bullock, whose bravura performance on opening night transcended her pre-show announced sudden onset of fever, took the audience to the core of the refugee experience and to that special Zauberland where art and life momentarily become one.