Women in Lebanon Need Theater to Get Rid of Negative Energy 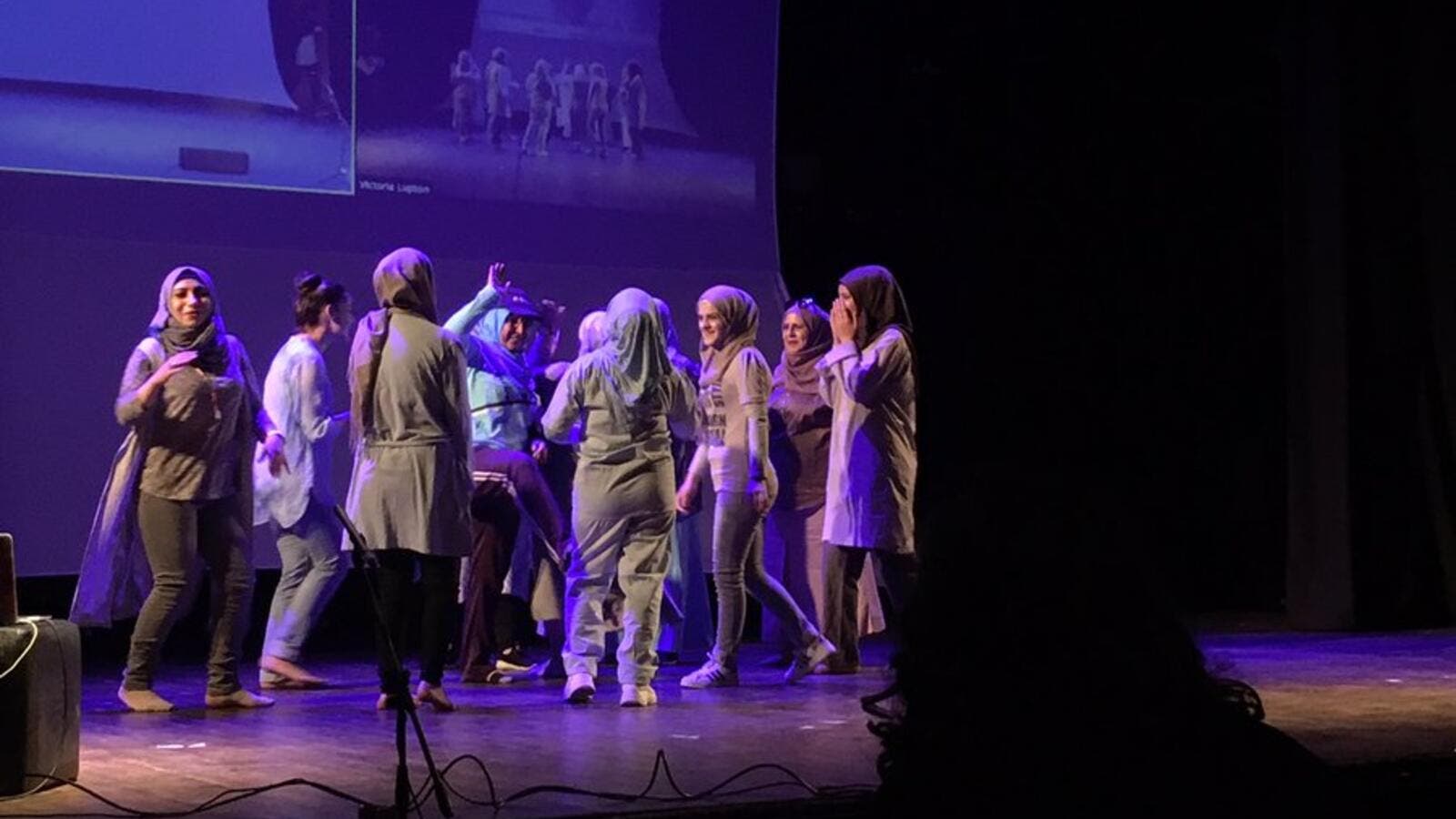 Dress rehearsal is done! Can’t wait for showtime (Twitter)
Highlights
Performing simultaneously via Skype at The Palace Hamra, in Beirut, and London’s Southbank Centre, the two groups will engage over a live-streamed tale of connecting over distance and how technology both facilitates and frustrates communication.

“My life in Lebanon is hard - making ends meet, keeping a roof over our heads. Everything is difficult,” Asia Matar said.

“I wanted to escape a little, and I found in theatre another life.“I got to know new people and was able to get rid of some of the sadness inside me,” the mother of six, currently living in Arsal said. “I come to theatre rehearsals because it relieves pressure.” Matar is one of 30 women, all refugees and asylum-seekers, who make up Staging Sisterhood, a theater troupe residing in Lebanon and the U.K.

This Sunday, Staging Sisterhood will perform “What’s Far is Near,” a project devised by the NGO Seenaryo, with Women Now for Development in Lebanon.

“I have to put a whole day aside every time we have a rehearsal,” Matar said. “I need theater to get rid of negative energy, and in order to get across a picture to audiences of the reality of the life that we live. Nothing except theater allows me to project my voice.”

Performing simultaneously via Skype at The Palace Hamra, in Beirut, and London’s Southbank Centre, the two groups will engage over a live-streamed tale of connecting over distance and how technology both facilitates and frustrates communication.

“The play is about a woman called Marsel who lives in Lebanon and is about to deliver her baby,” Victoria Lupton, Seenaryo Beirut’s co-director, said. “She doesn’t feel able to name her baby until she talks to her best friend in London, Basma.

“She tries to call her - but it turns out that the satellite that makes the internet work has moved, meaning that the internet is down across the world,” she added. “So begins a series of stories about missed connections, crossed wires, and unlikely relationships over technology.”

The performance coincides with Refugee Week, in hope that it will offer the audience a more nuanced picture of refugees.

“The public is used to thinking of refugees - and in particular women - as victims and passive recipients of help,” Lupton said.

“We want to show that our actors are complex, strong women with fiercely independent voices, who can be funny and devastating and surprising.

“They have been very involved with each other in the process of creating the work. Every other rehearsal has been conducted over Skype,” she added, “and we’ve also had a WhatsApp group that all 30 women are a part of, which they have used to share video clips, images, text [where necessary, they’ve used Google Translate], and emojis.”

The women wrote the script over the last three months, infusing the fictional tale with their own stories.

“One character in the play gets a phone call saying that someone very important to her has died,” said Faten Nakshbandi, a Syrian refugee currently living in the Bekaa. “This is a story from my life, when I heard the news about my father.

“It’s important to tell these stories,” she added. “When they stay inside, they become negative, but when we let them out, they release the pressure on you.”

“We worked from improvisation, created stories line by line, explored the body and particularly worked on collaborative choreography as an ensemble, did yoga and danced together,” Lupton said. “We worked on supporting and projecting the voice, created songs together and we played a lot of games with different objectives.

“In London, the same process was happening with our two directors there, Jo Tyabji and Brenda Nassali-Liston.”

The Palace Beirut has been trying to upgrade its internet connection in time for the Skype performance. The team has embraced technical difficulties as part of the story they want to share.

“Lebanon is not known for its flawless internet, and this is a highly technical project that involves four cameras in two countries feeding into one single broadcast,” Lupton explained. “Whatever happens on Sunday will be part and parcel of this fragile project that relies on an unstable video link between our two countries.”

For Ghaitha Azzeddine, a Syrian refugee living in the Bekaa, the shared experience with the other women is what has meant the most to her.

“We’re very far from each other, but we managed to do something beautiful and came together through this work. There’s a lot that we share between the two groups,” she said. “We’ve all moved to a country that isn’t ours ... We’ve all lost a father, a son, parents.

“Sometimes, they are there but they’re not able to play the roles they should,” she added. “In London, they have the same situation. There are these shared elements between us as refugee women, whether from Syria or elsewhere. This project allowed us to bring our talents, our problems, our respect for each other, all to bear.”