A waterlogged ditch in Buckinghamshire has yielded the most unexpected find — a rare, extremely well-preserved wooden figure dating back to Roman times.

The discovery — the first of its kind in 100 years — was initially dismissed as a piece of degraded wood when it was found in Twyford during work on HS2 last July.

However, closer analysis revealed that it bears the shape of a human, seemingly dressed in a knee-length tunic tied at the waist and sporting either a hat or hair.

A rare Roman wooden carved figure has been uncovered by #HS2 #archaeology. Found in Buckinghamshire, its carved details include clothing and a hat or hairstyle. Find out more about this early #Roman period artefact: https://t.co/aggWzsL6mf pic.twitter.com/SwWm2MRPKq

Archaeologists said that the lack of oxygen in the trench in which the figure was found was what prevented it from rotting — preserving it for some 2,000 years.

While its exact purpose is unknown, experts believe that the wooden representation may have been carved for the gods as a form of religious offering.

'This is a truly remarkable find that brings us face to face with our past,' said Historic England's senior science advisor, Jim Williams.

'The quality of the carving is exquisite and the figure is all the more exciting because organic objects from this period rarely survive.'

In the same ditch from which the wooden figure was recovered, archaeologists also found shards of pottery dating back to around 43–70 AD.

To provide a precise age for the figure itself, researchers are planning to conduct radiocarbon dating on a small fragment of the wood that was already broken off of the carving before it was unearthed from the ditch.

'Not only is the survival of a wooden figure like this extremely rare for the Roman period in Britain, but it also raises new questions about this site,' said archaeologist Iain Williamson of HS2's Enabling Works Contractor, Fusion JV.

Rare Roman wooden figure carved for the gods 2,000 years ago is discovered from a ditch by archaeologists https://t.co/3ycFLkKyzj

Outstanding questions, he added include: 'Who does the wooden figure represent, what was it used for and why was it significant to the people living in this part of Buckinghamshire during the 1st century AD?'

The figure is currently being further examined and conserved in the laboratory by experts from York Archaeology.

It is extremely rare for carved wooden figures from Britain's prehistoric and Roman periods to survive into the present day.

The last such discovery — the 'Dagenham Idol', which has been dated to 2250 BC — was recovered from the north bank of the Thames back in 1922. 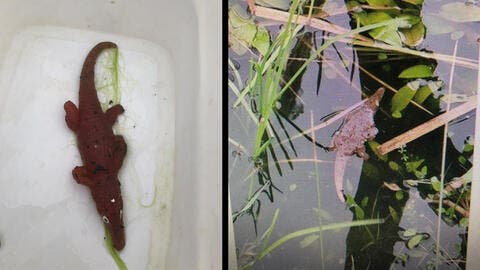 What is it? Mysterious Creature Found in a Zoo

In 2019 a Roman-era wooden arm that was thought to have been carved as a religious offering was found at the bottom of a well in Northampton.

The story of the figure's discovery will feature on the episode of BBC Two's 'Digging for Britain' programme airing on Thursday, January 13th.