Syrian actor Adnan Abu Abu Chamat was subjected to a widespread criticism and attack after he published a post on Facebook, in which he mocked actresses who do not appear to be aging.

Abu Chamat said in the post: “What annoys me is nothing but that every year our female colleagues look 10 years younger when we meet them, and we only age and wear out."

Adnan knew that his post was controversial and would involve him in arguments with followers, so he added: "Whoever leaves an impolite comment, it will be deleted or blocked immediately."

A follower named Moh'd Abdeljawad commented: "There are people getting younger like Amr Diab, Tamer Hosny & Assi Hellani", and Adnan responded: "Those are our female colleagues as well" adding some laughing emojis. 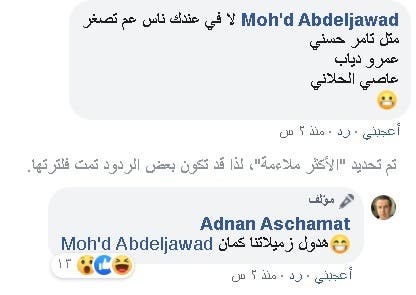 This response sparked great anger against Abu Chamat and the disapproval of his followers, refusing to describe male Arab a-listers as "females."

One follower mocked Adnan by saying: “Adnan Abu al-Shamat, his first dream is to take a selfie with Amr Diab. Tell us who are you Abu Chamat to talk about Amr Diab?"

Another person commented: "What a shame to speak about great artists in this way."

On the other hand, a large number of Abu Chamat's friends considered his words correct.

They said that if an artist does not improve her external form, she cannot work, so female artists usually improve their appearance in order to maintain continuity at work, while the male artist does not reach stardom if "he does not carve the rocks" As they say.