Is Ahlam Accused of Supporting a Money-Laundering Company in Kuwait?

Emirati singer Ahlam defended Kuwaiti company Boutiqaat, which is accused of money laundering along with other 10 famous Kuwaiti social media celebrities in the State of Kuwait.

Ahlam confirmed that she did not sense any illegal transactions during her dealings with Boutiqaat, and added in a post through her account on Instagram: "The law of life is that one is innocent until proven guilty, and my work with them is obvious and transparent.  I respect it and respect this major company, who established a great name that we are proud of, and has become a major competitor to international companies."

"Honestly, they are respectable and clear, and I've never sensed anything from their side that is not legal. My heart is with them because I consider them as my family, my home, and my position is firm today."

Ten of the most famous social media celebrities in Kuwait are accused laundering of tens of millions, after official escalations following the public prosecutor's decision to seize their money and prevent them from traveling.

Sources added that these names are only initial ones, expecting new names to be revealed in the coming days. 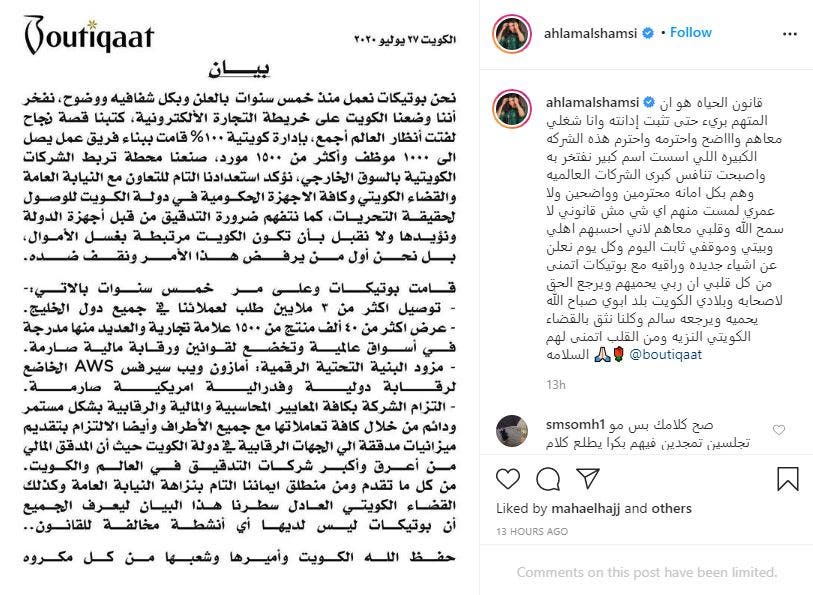