Published May 11th, 2022 - 10:14 GMT
The duo got married in a Star Wars themed wedding
Highlights
Frankie and Hale have been together since 2019

The duo got married in a Star Wars themed wedding in Frankie's family home in Florida on May 4th. The wedding was officiated by Grande's mother Joan Grande.

The 39-year old dancer took to his Instagram to announce the happy news by sharing a series of snaps from the small wedding ceremony.

Frankie added: 'Hale and I were married at a small intimate galactic ceremony in my family home in Florida on May the 4th be with you, cause we really are both that nerdy. It was the most beautiful ceremony, officiated by my incredible mother, and it brought us even closer together as we took our vows before our immediate families and before God!''

He continued: 'Special thank you to Dolce & Gabbana for dressing us in these one of a kind tuxedos! We adore them! We then followed our wedding with a joint bachelor party weekend of games with some friends and family and are currently on our mini-moon before I have to head to rehearsal for my upcoming show Titanique.''

The performer then added that the lovebirds will be having a wedding ball in the upcoming months, 'And this is only the beginning of the celebrations as we are having a Wedding Ball with all our friends in the upcoming months!  I can’t wait to share all of these amazing stories, pics and videos with you all slowly as we get them''

He ended his caption stating how happy he is marrying the man of his dreams 'but for now, let me just say I am the happiest I’ve ever been… I’m married to the man of my dreams, our families have merged together so beautifully, and we are well on our way to happily ever after. I love you Hale Grande. I am so so honored to be your husband.''

Popstar Ariana Grande took to her Instagram to share how happy she is that her older brother said his I do's to Hale, whose now last name is Grande.

"two very incredible and cosmically destined souls," she wrote. "i love you both so much and am wishing you endless lifetimes of happiness and health and copious amounts of video games." 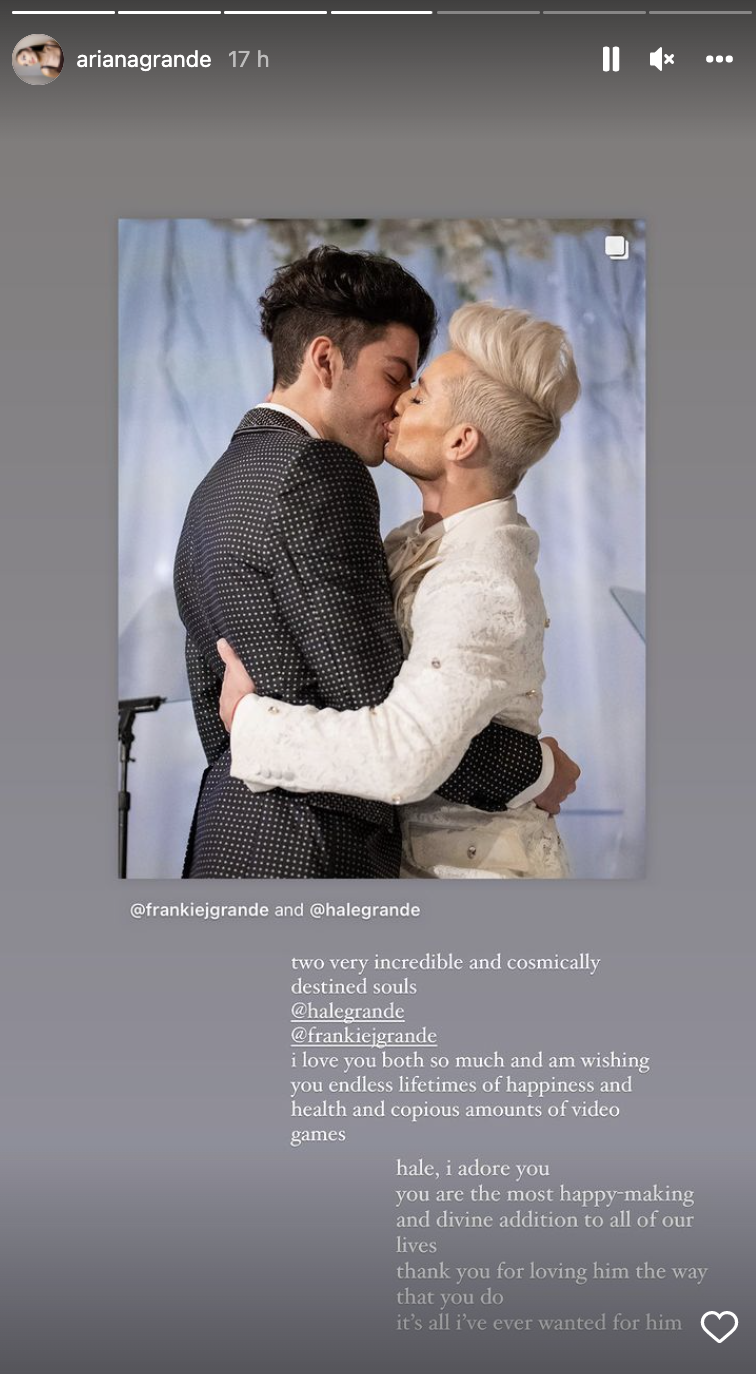 "hale, i adore you. you are the most happy-making and divine addition to all of our lives, thank you for loving him the way that you do. it's all i've ever wanted for him."

Frankie and Hale have been together since 2019, and June of last year, Frankie proposed while the two were at the VR entertainment center Dreamscape in Los Angeles.

While the two were playing an immersive screen, text reading, 'Will you marry me?' appeared onscreen.

'It was such a perfect, beautiful moment,' Frankie told People after the proposal.'

'Hale was completely surprised and we both started crying tears of joy.''

''I have been working on proposing to him in virtual reality for over a year and it was ABSOLUTELY breathtaking for us both.'