Published November 29th, 2022 - 04:58 GMT
A security guard attemps to block a man as he invades the pitch holding a LGBT flag and wears a t-shirt reading "Respect for Iranian woman" during the Qatar 2022 World Cup Group H football match between Portugal and Uruguay at the Lusail Stadium in Lusail, north of Doha on November 28, 2022. (Photo by Kirill KUDRYAVTSEV / AFP)

ALBAWABA - A football fan broke into the patch during last night's game between Portugal and Uruguay holding an LGBTQ+ flag before being stopped by stadium security. 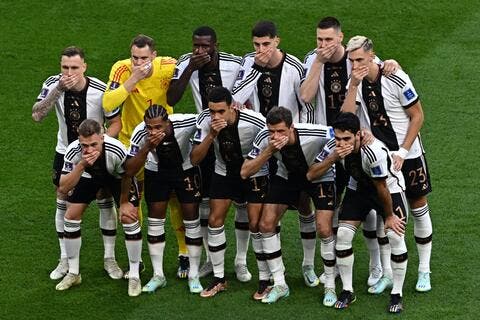 Reports said that Mario Ferri, who stormed the patch, was released without consequences after finding out that he was holding a 'Peace flag' and not a 'Pride flag'.

Mario Ferri, who is an Italian footballer and humanitarian worker, was also wearing a superman T-shirt with "Respect for Iranian Woman" written on the back as a way to show solidarity with protests in Iran following the death of Mahsa Amini, 22, in the custody of the Iranian morality police.

On the front of the T-shirt, the words "Save Ukraine" are written. Apparently, the football fan wanted also to highlight the conflict in Ukraine as the war with Russia entered its 10th month.

Qatar banned raising the LGBTQ+ flag nor wearing or holding anything that shows support for the Queer community inside the country during the FIFA World Cup, which is taking place from Nov. 20 to Dec. 18, asking football fans to respect Qatar's culture.

Days ago, the German national team posed in a photo while covering their mouths to denounce FIFA's ban on LGBTQ+ (One Love) armbands.