Published October 18th, 2021 - 06:24 GMT
Facchinetti says he plans to sue McGregor.
Highlights
This is not the first time Conor McGregor got involved in a physical fight.

DJ Francesco Facchinetti, claims Irish UFC fighter Conor McGregor punched him in the face at a nightclub, breaking his nose.

In his latest violent outburst of the year, McGregor reportedly punched an Italian DJ and television personality named Francesco Facchinetti during a night out clubbing, just hours after having his son baptized at the Vatican in Rome.

Facchinetti claims he and his wife had been partying and “having fun” with McGregor for two hours prior to the incident before the fight started.

McGregor invited him to another party, and then punched him in the face when he accepted, breaking his nose.

“At 2.30 this night I was attacked by Mr. McGregor,” Facchinetti said in an Instagram video (translated from Italian). “The very famous McGregor, who punched me in the mouth, broke my nose in front of ten witnesses, his friends and his bodyguards.''

''He attacked me without motivation as we talked for more than two hours and we also had fun together. I could have shut up and not say anything to anyone, but since I’m here to tell it, I must say that that person is really violent and dangerous.” He continued.

“Then out of nowhere, he threw a punch in the face of Francesco. He was inviting us to another party,” Facchinetti said 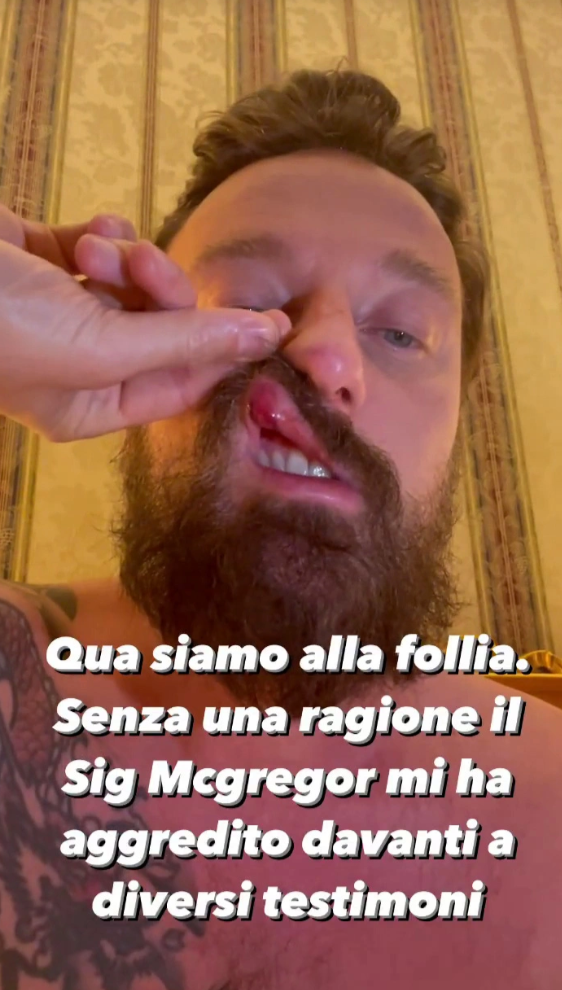 “He will stay in Italy until October 26th. If you see him stay away from him. Don’t go near him and ask for autographs because he is an unstable and dangerous person.” McGregor is currently vacationing in Rome with his family and had just had his third son, Rian, baptized at the Vatican earlier that day.

It is seemingly the second time in as many months that McGregor has had an altercation with a celebrity. The alleged assault follows an incident on the red carpet of the VMAs in New York in September.

Conor McGregor out here trying to fight Machine gun Kelly after he denied to take a picture with him 🤣🤣🤣🤣🤣😭😭😭😭😭 #VMAs #ConorMcGregor #MGK pic.twitter.com/qXnfvCHWCa

McGregor was seen on video throwing a drink at the rapper Machine Gun Kelly, before calling him a "little vanilla boy." He told Entertainment Tonight at the time: "I just showed up, and I don't know. I don't even know the guy. Nothing happened with me. I only fight real fighters, people that actually fight, you know what I mean?"