Friends Reunion Special: The Six Iconic Pals Are FINALLY Back Together (Videos)

The long-awaited Friends Reunion finally made its debut on Thursday, with the sitcom's cast heading back to the iconic set to reminsce on the show's history, 17 years since its conclusion. 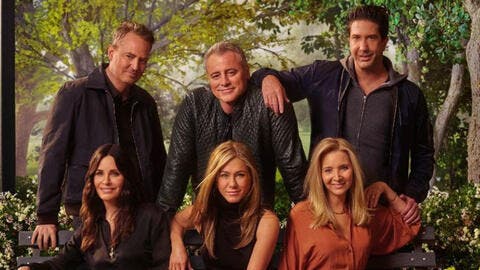 The six stars - Courteney Cox, Jennifer Aniston, Matthew Perry, Matt LeBlanc, Lisa Kudrow and David Schwimmer - reunited on the Warner Bros. studio lot, where the original show was filmed, for a night full of laughs, tears and everything in between.

Friends is arguably one of most successful sitcoms of all time, running for 10 beloved seasons and 235 episodes from 1994 to 2004, and fans had been clamouring for a reunion for many years.

The special - which earned a flurry of reaction from die-hard fans - also saw a slew of guest stars reminsce on their own memories of the show, including David Beckham, Kit Harington, BTS and Reese Witherspoon.

The special was filmed over a three-day period on the Warner Bros. lot, using the iconic fountain from the show as a backdrop for the cast's main discussion, hosted by James Corden.

The Late Late Show host - whose choice was quite controversial among fans - delved into the making of the show in a lively discussion, and reflected on the moment each actor landed their iconic part.

The special kicked off with all six actors heading back to the sitcom's legendary set, and Jennifer struggled to hold back her tears as she embraced Courteney, clearly overwhelmed at returning to the series almost two decades since its conclusion.

Corden also brought over Ben Winston, who serves as showrunner on The Late Late Show, to serve as the director and producer of the reunion special.

Though the Q&A did garner some criticism for failing to delve too deeply into topics that most Friends super-fans weren't already familiar with.

The discussion delved into familiar territory, asking about each cast member's auditions and other tales from early in development.

Aniston revealing a producer on a show she was on while auditioning for Friends, incorrectly told her, 'That show won't make you a star.'

She also shared the bombshell that she and David did have a sneaky off-screen crush on the series, while viewers were gripped by Ross and Rachel's will-they won't-they romance.

As James asked: ' It's impossible not to realise and see that you're all young, hot, good looking successful actors, that it's inconceivable to me that there weren't perhaps off-screen romances.'

A coughing Jennifer said: 'Well.. I mean, David?' before David added: 'The first season, I had a major crush on Jen.'

Of his feelings for Jennifer, David added: 'At some point we were both crushing hard on each other but it was like two ships passing because one of us was always in a relationship. So, and we never crossed that boundary, you know we respected that.'

The actress also reminisced on the iconic moment Ross and Rachel shared their first kiss in Central Perk, after he finally learned his hidden feelings were reciprocated.

She told James: 'I remember saying one time to David, ''it's gonna be such a bummer if the first time you and I actually kiss is going to be on national television''.

'Sure enough, first time we kissed was in that coffee shop. So we just channelled all of our adoration and love for each other into Ross and Rachel.'

Series creators David Crane and Marta Kauffman also regaled fans with tales from casting, and how the idea for the show was first formed.

Matt admitted that before he landed the role, he had just $11 to his name as his career had hit rock bottom, have appeared in several short-lived sitcomes.

Co-creator Marta Kauffman said: If I remember correctly, he had like $11 in his pocket when he auditioned, maybe it was nine, but it wasn't a lot.

David added: 'We saw a lot of guys who you believe were actors, guys who liked women, but they weren't funny then Matt came in, and suddenly on him the lines felt funny.'

Producer Kevin Bright later added: 'So Matt, went right down to the wire - auditioned for the network and NBC with another actor and he killed it and he got the partners Joey.

'But the funny thing about it is the other actor ended up in the show in The One with the Unagi, playing fake Joey.'

Matt later left his co-stars recoiling in horror when he revealed he suffered a nasty nose injury mere hours before his audition, explaining: 'To make a long story short, we woke up in the middle of the night at his apartment and had to go to the bathroom - and I got up too fast.

'I can't believe I'm telling this, I kind of blacked out as you do, fell face first into the toilet and I hit my nose on the bottom of the toilet seat, and a huge chunk of meat came off my nose.'

'I'm looking in the mirror, it's bleeding, I was like 'oh my god, I have to go into the big callback' and it's like a big ugly scab on my nose.'

Still, for the more casual fan, the Friends Reunion Special may be more enlightening than for the die-hard fan, but there is still nostalgia aplenty.

The cast visited the original soundstage - Stage 24 - where Friends was filmed, where it took over three weeks to re-construct the iconic set 17 years since the final scenes were filmed.

'Where's the tissue box?' Jennifer asked while visiting the living room set, while LeBlanc wonders if Cox's lines are still written on the kitchen table.

The nostalgia continued with the cast doing sporadic 'table reads' on the set, with the stars re-creating some of the show's most beloved moments.

Among these moments are Monica getting stung by a jellyfish and Phoebe seeing Monica and Chandler kissing, along with the monumental first kiss between Ross and Rachel.

The cast even quiz each other on their Friends lore with a recreation of the legendary trivia game right in the living room set, which famously saw Rachel and Monica lose their beloved apartment to Chandler and Joey.

Most fans were expecting some of the show's most iconic guest stars to return - and many of them do - but some of the biggest surprises come from celebrity fans.

When HBO announced the May 27 date for the special, it also released a list of celebrity guests that left many fans scratching their heads.

While some were expected like guest stars Tom Selleck, Reese Witherspoon, Elliott Gould and Christina Pickles, others like David Beckham and Malala Yousafzai were not.

Malala revealed that if she were to be any Friends character, she would be, 'totally a Joey,' with a bit of Phoebe as well, while also revealing her favorite moment is The Routine, the iconic dance between Monica and Ross.

Mindy Kaling said one of her favorite parts of the show was Monica and Chandler hiding their relationship during Season five, leading to the legendary episode The One Where Everybody Finds Out.

David Beckham also surprised fans by revealing he's more of a Monica, because he is also a 'clean freak,' adding his favourite episode was infamous bottle ep The One Where No One's Ready.

Lady Gaga also made a star-studded cameo, heading into Central Perk with a guitar in hand to perform the famous song Smelly Cat alongside Lisa.

Not holding back, Lady Gaga belted out the lyrics while playing her guitar and sitting on the yellow coach next to Lisa who hilariously told Gaga she wasn't 'too bad.

Starting off their segment, Gaga- real name Stefani Germanotta- asked: 'Mind if I take Smelly Cat for a spin?'

Lisa happily agreed and was left nodding after hearing the hitmaker's impressive vocals on the first few lines, telling her: 'Not bad... that was really, really good.'

Adding an extra twist to the usually acoustic song, Gaga and Lisa were then joined by several gospel singers donning long blue robes for the final few lyrics.

Once the applause died down, Lisa delighted fans some more as she joked: 'That was so great... I still think it’s better when it’s just me.'

While some fans may hope this long-awaited reunion could lead to a scripted revival series with all of the cast members returning, they all shot that down during the reunion.

Given the huge anticipation for the special, fans were no doubt furious when they struggled to access HBO Go in the US to stream the one-off.

US and international viewers penned: 'The One Where HBO GO crashed #FriendsTheReunion... HBO GO crashing : "We were on a break!!"...

'##FriendsTheReunion... The one where I subscribed to HBO Go just for #FriendsReunion and it crashes. Anu na?!?!?!?!...