Eleven months ago, Kylie Jenner and her on-off partner Travis Scott welcomed their second child together, a baby boy, whom they called "Wolf."

However, shortly after, the pair decided to change the name of their son, as Kylie wrote on her Instagram account: "FYI our son's name isn't Wolf anymore. We just really didn't feel like it was him. Just wanted to share because I keep seeing Wolf everywhere." 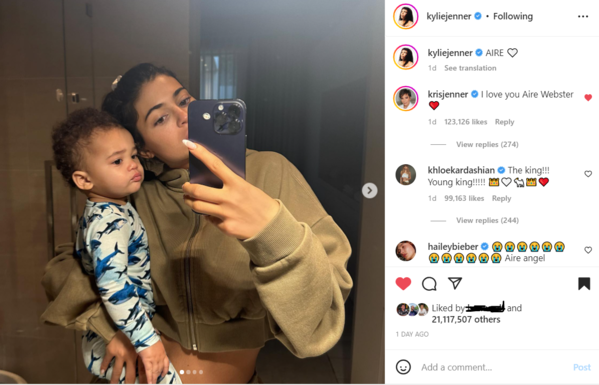 Since Jenner's son was born, the businesswoman has been sharing pictures of the toddler but not showing his face, but now, Jenner has surprised her followers with a series of pictures to show off her little man.

In the caption, Jenner also revealed the new name for her son, as she wrote: "AIRE," and added a white heart.

Fans were so excited in the comments, as they flooded the comment section, but one fan account wrote: "Do you think it's pronounced air or Airey?" Jenner responded, "AIR" alongside a red heart emoji.