Egyptian Tik Tok star Haneen Hossam has shared a video in which she made comments about her 10-year prison sentence for human trafficking. 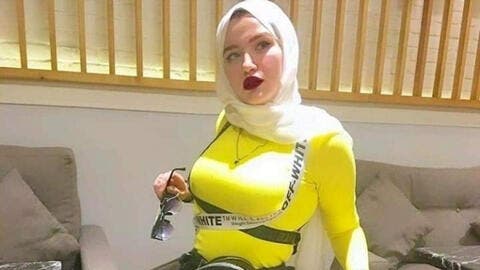 Haneen Hossam was sobbing in the video and appealed to Egyptian President Abdel Fattah Al-Sisi, to re-verdict her case.

Haneen said: "I obtained a judicial ruling of acquittal on the appeal, and I was surprised the next day that I would be presented to court, and I went to the Attorney General’s office, he told me that as long as he's sitting at the office, there is no acquittal for Haneen Hossam."

She continued: "Why don't you want to announce my innocence, you can see that I haven't done anything."

Then Hossam appealed to the Egyptian president, Abdel Fattah Al-Sisi.

She added: "I was wronged and I did not do anything. I am literally dying. Save me. My mother is about to have a stroke after the ruling."

Haneen explained: "I did a promotion for Likee app and didn't do a tabboo, you all have the app, and a number of YouTube celebrities are on the same application. And if this application is forbidden, why do you still have it out there?! Will a 19-year-old know how to practice human trafficking?!"

The Egyptian TikToker continued: "The future and life of a family is being destroyed. What did I do? No one was harmed by me, I didn't harm anyone", adding that she was paid $300 only for this ad.

She confirmed that following her release after 10 months of imprisonment, she did not talk to anyone, and that she is currently among her family.

Cairo Criminal Court, held in the Fifth Settlement, had sentenced TikTok stars, Haneen Hossam and Mawadda Al-Adham, to imprisonment for 10 and 6 years respectively, and a fine of 10,000 pounds each.

Haneen Hossam was absent from the sentencing session, while Mawaddah Al-Adham attended, amid tight security in the absence of the defendants' lawyer.

The trial of Mawaddah Al-Adham and Haneen Hossam, is on the charges of human trafficking, by exploiting children in videos via Instagram and TikTok, after a decision was issued to refer them to a criminal trial.