Turkish actor Kerem Bürsin was trending with more than 100,000 tweets on Twitter in Spain, where fans have launched a campaign of support after he was criticized in his country for calling those who go to cafes without wearing mask "idiots".

Büsrin, star of the Turkish series Sen Cal Kapimi (You Knock On My Door) broadcast in Spain three days a week since last July, said in a short video released last night: "Excuse me, but those who sit in a cafe without a mask are idiots".

Those who attacked the star launched the hashtag "Kerem Bürsin, don't overdo it" which ranked fifth in the trending list in Turkey, with comments that made the actor look ugly, they even emphasized that he himself does not wear a mask while filming.

In response, Bürsin fans in Spain started a support campaing by launching hashtag "ArkandayizKeremBuersin" (We are with you, Keren Bürsin), praising the actor's civic conscience, with more than 100,000 tweets in just two hours and also reaching the top 5 in the trending list.

The topic was also trending in Italy, Poland and Brazil, where Turkish soap operas are also popular.

Later on, Kerem Bürsin broke his silence and apologized to the audience for what he described as 'not choosing the right words to express his opinion'.

On Twitter, Kerem sent out a video message, and said:

'Hello everyone. There was a statement I made on the live broadcast yesterday, and unfortunately, and because of a word I used, it went elsewhere, so I admit it was not a right choice to use the word idiot, it was not pleasant and even wrong. I apologize for this mistake.'

He added: 'It could have been another word I could use. So sorry. But we know that we are in a pandemic, and it has not been easy for anyone for the past year, and there is something we know that can prevent and reduce this risk: wearing a mask . We are now ranked first in the world in regards of number of cases, and that's not a good thing.'

Kerem continued: 'If we are going to socialize, go to a cafe, restaurant, or any social event, then wearing a mask means taking responsibility. This means reducing the risk of the virus.'

'Sets, you asked. Unfortunately, actors do not wear masks on sets because our scripts are not written according to them. But all kinds of precautions are being taken. For example, we are always masked between the scenes.'

'Our team always wears masks. We are tested every day. According to those test results, we either go on to the set or not. Disinfectants are everywhere, but despite that, there were 5 positive cases in our set this week. I apologize for the misunderstanding, but most importantly let's put on the masks please.'

Kerem Bürsin's co-star Hande Erçel was also trending this week, but to a less controversial matter.

The beautiful star shared a series of stories with her 20.5 million followers on Instagram while she was sitting among stunning flowers arrangements. 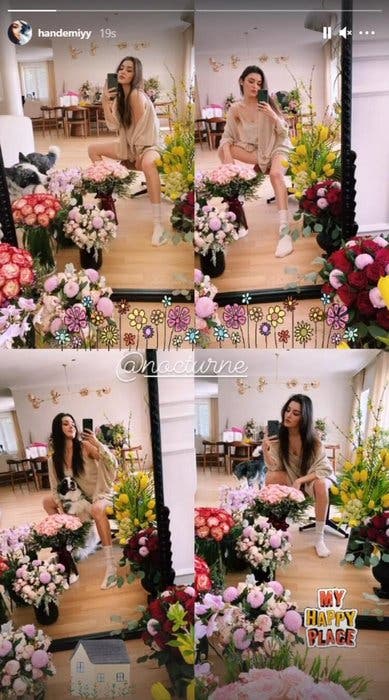 The beautiful set was not the only thing that caught followers' attention, Hande's beige cardigan also stole the spot light, prompting the audience the search for its price.