Kim and Kanye's New Baby Girl is from a Surrogate Mum! 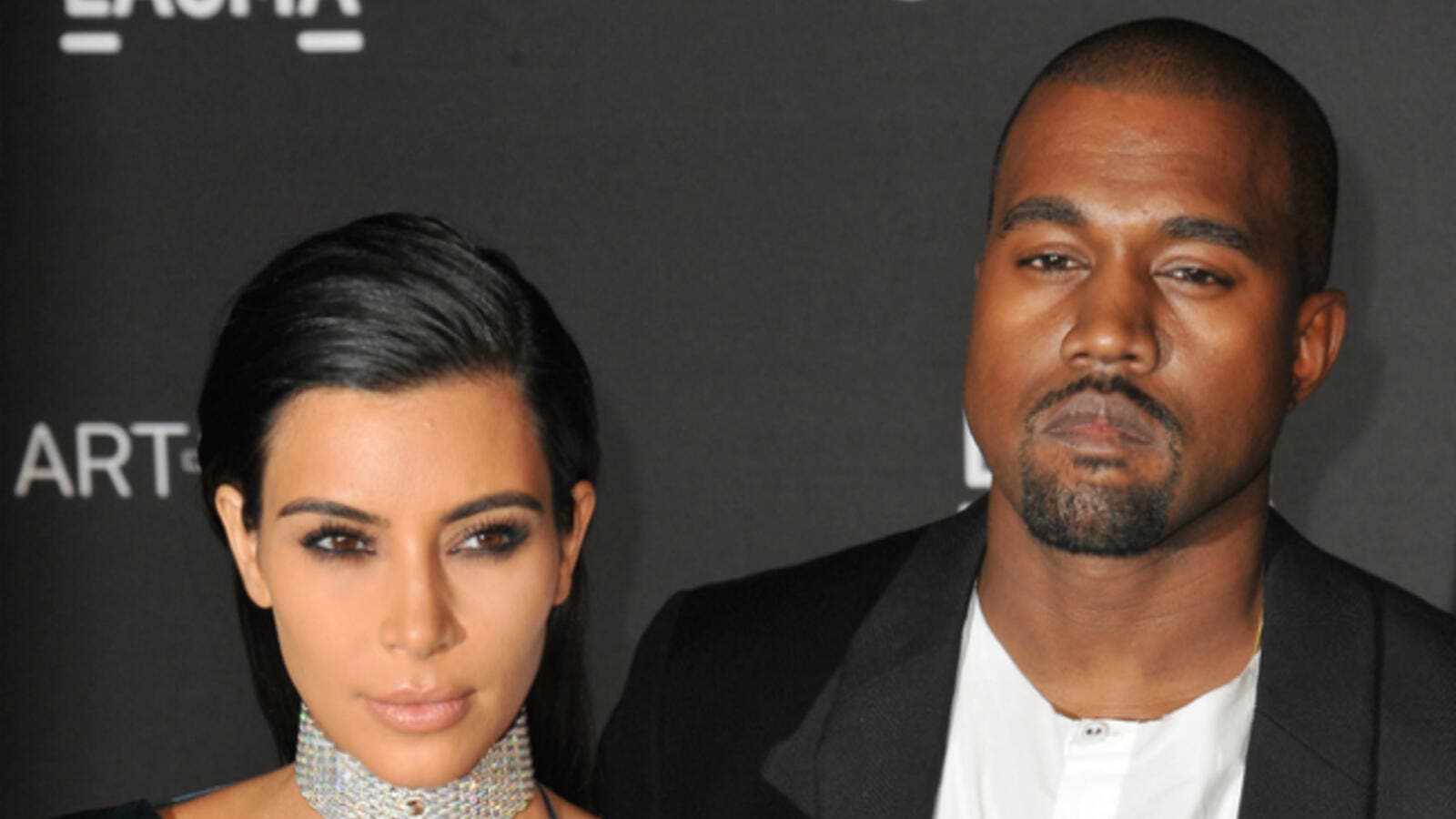 Kanye West was spotted out in LA on Wednesday as news broke that he and Kim Kardashian are set to welcome their third child via surrogate.

The rapper, 40, was seen heading to his Calabasas office wearing navy sweats, baggy tee and a Yeezy hoodie along with trainers with the laces undone.

It came as TMZ reported that the celebrity couple are having a baby girl who is due at the end of January.

They already share a daughter North, four, and son Saint, who is almost two.

He's the daddy: Kanye West was spotted out in Calabasas, near Los Angeles, on Wednesday as it was claimed he and wife Kim Kardashian are expecting a baby girl via surrogate

The two are said to be 'over the moon' as they prepare to expand their family.

It was first reported in July that Kim, 36, opted to go the surrogate route due to health complications during her first two pregnancies.

Kim, who suffered with life threatening placenta accreta when carrying North and Saint, is said to have been referred 'by an agency' to find the right surrogate.

TMZ claims the famous duo paid $45,000 for the surrogate to carry their third child.

On trend: The rapper, 40, drive himself to his office wearing navy sweats, baggy tee and a Yeezy hoodie along with trainers with the laces undone

Winter baby: Kim and Kanye's third child is due at the end of January after paying $45,000 to a surrogate to carry the baby, a report Wednesday claims

'The entire family is over the moon. Kim had been looking for a surrogate for months until recently when she found the perfect candidate,' a source told People.

'They want everything to be perfect and for the baby to be extremely healthy', the insider added.

'They don’t want any complications and Kim is providing an ideal eating regimen and diet so everyone knows what the baby is consuming before it's born.'

TMZ reports that the surrogate is prohibited from smoking, drinking or doing drugs during the pregnancy.

On Thursday, fresh reports by the site revealed the surrogate is reportedly an African-American in her Twenties who has been married for five years.

She is said to be the mother of two children who is a college graduate.

A report by UsWeekly at the time alleged the surrogate was 'three months pregnant'.

The magazine's insider added the surrogate is 'in her late 20s' and are set to welcome their third child in 'January 2018'.

Devoted mom: Kim - who suffered with life threatening placenta accreta during her first two pregnancies - is said to have begun searching for a surrogate via an agency

TMZ also states that, should the pregnancy produce more than one child, the surrogate will receive an additional $5k per extra child ($5k extra for twins, $10k extra for triplets and so forth).

With the surrogacy comes the conditions that the employed woman doesn't smoke, drink alcohol, take drugs and not have sexual intercourse in the weeks leading up to the pregnancy.

The surrogate is banned from hot tubs or saunas, can't go near cat litter, won't be allowed to apply hair dye, can only have one caffeinated beverage per day or consume raw fish.

TMZ goes on to report that the agreement provides that Kim and Kanye 'assume the legal and parental responsibilities for any child... that may possess any congenital or other abnormalities or defects'.

Kim's alleged decision to hire a surrogate comes after she was diagnosed with placenta accreta during both pregnancies.

The potentially life threatening condition occurs when the placenta attaches too deeply into the uterine wall, which could lead to severe hemorrhaging during labour.

During a November 2016 episode of Keeping Up With The Kardashians, Kim explored the possibility of carrying her third child.

Yet she was left bereft when doctors told her that there are too many risks if she gets pregnant and that it would be life-threatening.

Kim said on the show: 'If the two doctors that I trust have told me it wouldn't be safe for me to get pregnant again, I have to listen to that.'

Speaking in April, Kim made it clear that she wanted to have another child.

She said on the reality show: 'I’d love nothing more than to expand my family and just know that I have this world at home that’s safe.

'And if for some reason I left this earth sooner than I really wanted to, then my kids would have a support system at home — so that I know that they would be okay if I wasn’t here.'

Such a great mom: Kim was diagnosed with placenta accreta during both pregnancies; pictured in June with daughter North

She later explained: 'I can’t carry anymore kids… it’s the worst. I give up.'

Discussing the prospect of surrogacy, she added: 'Kanye was really nervous about the surgery… but I know he would want to have more kids.

'I feel like surrogacy is the only option for me. Kanye and I are going to look into other options and see what we are comfortable with … but I’m definitely leaning towards [surrogacy].

'I always knew surrogacy was an option - now it’s my reality. Whatever is meant to be will be.'

Proud mummy: Kim (pictured with son Saint) was left bereft when doctors told her that there are too many risks if she gets pregnant and that it would be life-threatening

The reality starlet, previously revealed that her sisters Khloe and Kourtney and her best friend Chrissy Teigen had offered to be her surrogate in the past following her health concerns.

As well as being a risk to her health, Kim has admitted that she found pregnancy 'the worst experience of her life!'

Writing on her website, she explained: 'I'm gonna keep it real: For me, pregnancy is the worst experience of my life!'

Distressing: Kim suffered with placenta accreta during both pregnancies. The potentially life threatening condition occurs when the placenta attaches too deeply into the uterine wall

Candid: Kim has spoken openly about hiring a surrogate on her reality show

Upsetting: As well as being a risk to her health, Kim has admitted that she found pregnancy 'the worst experience of her life!'

The socialite continued to express her most frustrating concerns with the process, noting 'the complete mindf**k of how your body expands and nothing fits'.

Kim also spoke about how 'disgusting' pregnancy can be, and how women are never prepared for it because no one likes to talk about it.

'Do you know you basically have to wear a diaper for two months afterwards?' she asked,'I don't feel sexy, either - I feel insecure and most of the time I just feel gross,' Kim revealed of her state of mind.