The rebooted action film is set to be released in the UK next week.

And Kristen Stewart joined her co-stars Naomi Scott and Ella Balinska on the star-studded red carpet on Wednesday night for the Charlie's Angels premiere held at The Curzon Mayfair in London.

The Twilight star, 29, who plays Sabina Wilson in the film, dazzled at the screening as she cut an edgy figure in a black and silver sparkly bardot gown, with a corset top which showcased her toned figure.

Kristen accessorised her look with a collection of chunky silver padlock and safety pin necklaces with matching bracelets and rings.

The Hollywood star styled her cropped brunette locks into her signature gelled back hairdo and added a slick of bold make-up which included electric pink smokey eye shadow.

Kristen knew how to work her best angles as she put her best foot forward and posed up a storm, later taking selfies with fans on the red carpet.

Naomi, 26, cut a racy figure in a black PVC unitard which had a high-neck, long sleeves and even covered her feet, she layered the item of clothing with a blue and black jewel-encrusted floral mini dress.

Naomi styled her cropped brunette locks into a gelled back hairdo, she added a slick of glamorous make-up to enhance her pretty features.

Ella turned heads as she put on a very leggy display in a backless black long-sleeved dress with an extremely daring thigh-high split and diamond chain back.

Ella styled her brunette locks into a sophisticated sweptback hairdo, adding a slick of glamorous make-up to enhance her stunning features. 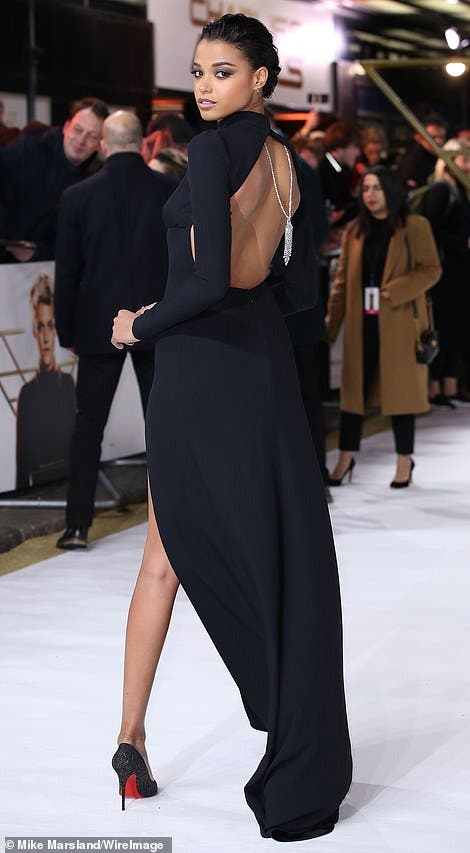 Director, actress, producer and writer of the new Charlie's Angels reboot Elizabeth Banks looked incredible as she showcased her toned waist in a black cut-out Versace dress with a gold logo on the belt and padded shoulders.

The star, 45, styled her blonde locks into a blow-dried hairdo and added a slick of glamorous make-up, she was joined at the premiere by her Pitch Perfect producer husband Max Handelman.

Celebrities attending the premiere included Made In Chelsea's Lucy Watson and Kimberley Garner as they walked the star-studded red carpet.

The premiere comes after actress and director Elizabeth stood behind her film on Monday amid a poor $8.6 million showing at the box office in its opening US frame.

'Well, if you’re going to have a flop, make sure your name is on it at least 4x. I’m proud of #CharliesAngels and happy it’s in the world,' Banks, 45, said in a tweet.