American basketball player Kyrie Irving has given a rare confession about his personal life after after the Brooklyn Nets beat the Boston Celtics 109-104 on Friday night. 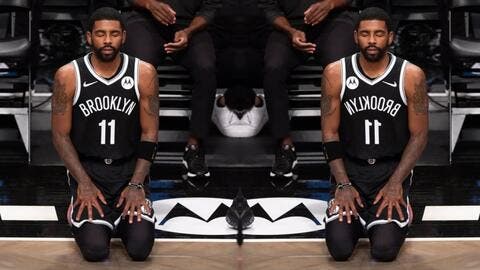 After the game, Irving took part in the postgame news conference and addressed that he's observing the Holly Month of Ramadan this year with his Muslim brothers and sisters.

During the conference, Kyrie said:

'All praise is due to God, Allah, for this... For me, in terms of my faith and what I believe in, being part of the Muslim community, being committed to Islam, and also just being committed to all races and cultures, religions, just having an understanding and respect. I just want to put that as a foundation. There's such a divisive energy out here, or it's been that way in our society, it's just so divisive... bringing that into the game, I don't want to, but obviously a lot of people have questions.'

'But yeah, I am taking part in Ramadan with a lot of my Muslim brothers and sisters. And it's been an adjustment. That's really what I can say. It’s just being committed to my service to God, Allah, and then continuing on with whatever I’m guided with. I’m just happy to be part of my community and doing the right things. So, fasting is definitely is definitely part of it — if you know anything about the Muslim community. But yeah, just really blessed and grateful to be taking part of this.'

The Brooklyn Nets player didn't explain much about fasting rather than calling it an "adjustment".

And based on the timing of the games, Kyrie would be fasting while he's playing, meaning that he cannot drink water before or during the game, because those who observe Ramadan do not consume food and beverages from Al-Fajr call to prayer until sunset.