Bahraini singer Hala Al-Turk has occupied headlines when she testified in court against her mother Mona Al-Saber, claiming that Mona has taken $53,000 from Hala's account and never paid them back.

Hala's move came around Mother's Day, as her mom Mona shared many heartfelt videos on social media thanking Hala for the best gift ever on her day.

Many celebrities got involved in the incident, whether to support Mona Al-Saber or to advise Hala Al-Turk to retract and ask for her mother's forgiveness.

Haya sent out a message to Hala via a video she shared on social media.

Al-Shuaibi told Al-Turk: 'This is your mother, Hala. Make her happy. And whatever she took from you is considered nothing. I am ready to pay the money back to you from my own account. Get her out of prison because in life what goes around comes around. Don't listen to anyone, plug your ears and embrace your mother. I'm afraid of God's wrath on you.'

On Snapchat, Mariam Hussein and her mother posted a message to Mona Al-Saber telling her that Mariam's mother is willing to support and bear the expnses imposed on Mona, whether they are 200k or 300k AED ($54,000 - $81,000) so that she won't get insulted in prison.

Fouz has offered to help Hala and her mother because she cannot see this thing happen to a mother. Unfortunately Fouz was attacked by a social media personality that called her a 'hypocrite', which prompted Fouz to be raged and respond to that man in complete fury.

Rayan Jailer posted a video on Instagram to offer advice and help to both Hala and Mona.

He said: 'A message to Hala, all the treasures and money of the world do not replace a mother,'

He added: 'A message to Mona Al-Saber. Consider me your little son, and all my money and my wealth is yours, because I experienced the feeling, and I cannot abandon my mother. I cannot leave her in a position where she might be harmed by me.'

A month ago, Mona Al-Saber has revealed that Dr. Khuloud has paid Mona's son's school expenses.

In December last year, Ahlam sent out a message to Hala Al-Turk via Instagram Stories.

She wrote: 'I love you mummy and may my Lord protect you. Mothers are the paradise of the world. No matter what happens keep her satisfied my daughter and leave it to God he will settle it and things will get better.' 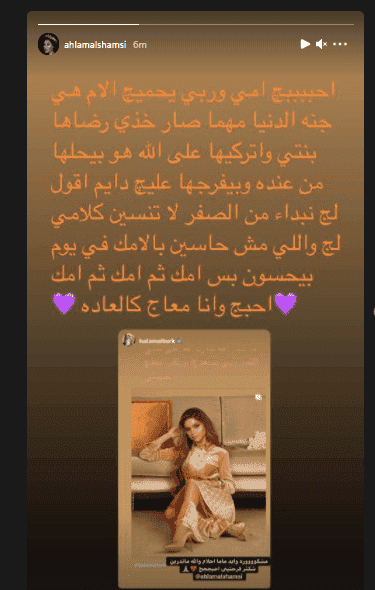