Melody Jordan radio station has released an official statement on their Facebook page responding to the attack aimed at Moath Omari and Jihad Abu Baidar.

"Official statement:
Melody Radio's board of directors have decided to suspend Alaina Wa Alaik show presented by Jihad Abu Baidar and Moath Omari, which broadcasts on the radio station between ten o'clock until twelve o'clock, due to the recent case of controversy that occurred during the radio’s contact with the freed prisoner Ahlam al-Tamimi until full explanation of what happened in this call and rationale for the matter is revealed."

"The radio station stresses its full support and adoption for the case of the freed prisoner from the first day, and all issues of the nation, stressing their respect for the large audience of the radio and for their opinion, which is a beacon for the work through which we seek to obtain their satisfaction." 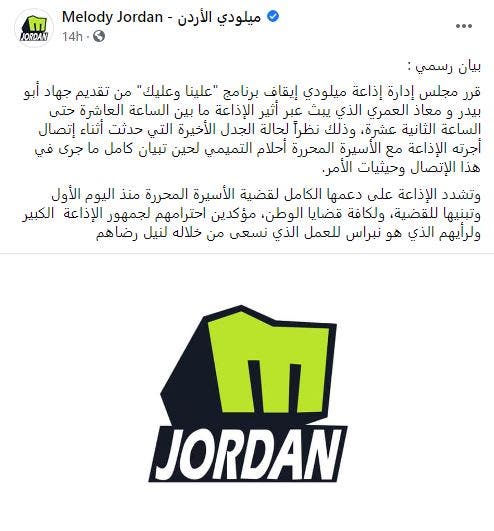