Nawal El-Zoghbi Posts Her Son's Picture for the First Time

Lebanese singer Nawal El-Zoghbi has shared for the first time with her followers on Instagram, a photo of her son, George Deeb, and the photo received a great reaction within less than an hour of its publication. 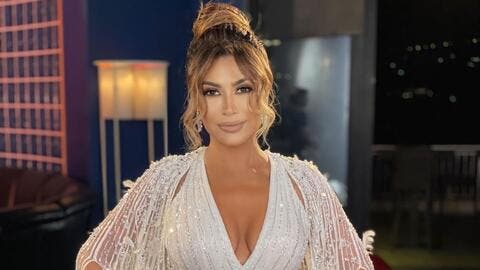 Nawal, 50, appeared in the photo, placing her head on her son's shoulder, while he was embracing her, and she captioned the photo: "He has become a young man. May God protect all the children of the world. For the first time, Georgy agreed to take a picture."

George seemed to be a handsome young man and closely resembled his father, Elie Dib, according to commentators, while some of the Golden Star's followers on Instagram, who has more than five million followers, likened him to Moroccan artist Saad Lamjarred.

The photo, which she also posted on her Twitter account, sparked a wide interaction by dozens of Nawal's followers, who number about 9 million people, including the artist, Ramy Ayyash, who commented: "May God protect him."

In August 2008, Nawal El-Zoghbi announced her divorce from her husband, Elie Dib, after a successful marriage that lasted 15 years, during which they had 3 children, Tia in 1998, and twins Joey and Georgia in 2002.