The band placed Shireen's name across a backdrop during the concert, the letters on the screen read that Shireen's crime was being Palestinian, and that her punishment was death. 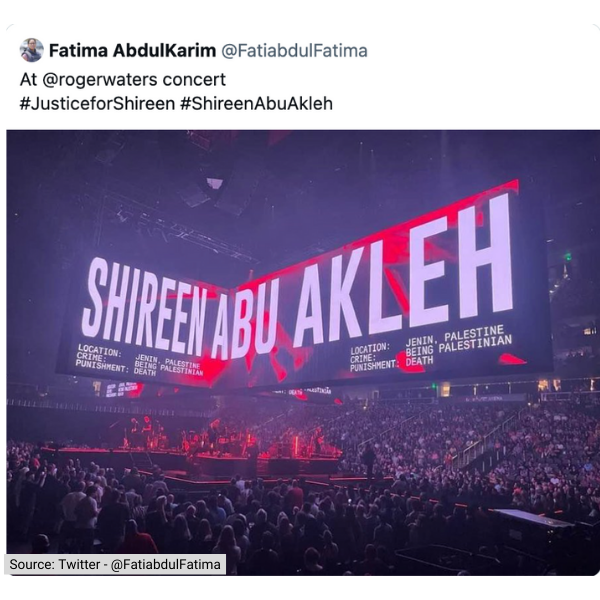 Shireen Abu Akleh was a journalist for Al Jazeera, and while doing her job covering an Israeli occupation army raid, she was shot dead.

It is pretty known that the co-founder of the progressive rock band Pink Floyd, Roger Waters is an advocate for Palestinians and their rights, in addition to supporting the BDS movement.

In 2021, Roger Waters posted a video on his Twitter account saying that what Israel is doing makes him angry, and that he can't believe what is happening, and the British musician captioned the post: 'A note from Roger. It’s official ISRAEL is an APARTHEID STATE. Check out SHEIKH JARRAH GENOCIDAL HOUSE CLEARINGS.''

A note from Roger.

And a few days after posting that 2 minute long video, Waters shared another video on his Twitter page, saying: “At 10 past three this afternoon, I got a message that Israel has told the UN it will bomb the Al-Aqsa and Al-Buraq UN Schools in two hours’ time. That’s 5 p.m. Eastern Time here.''

“The schools are overcrowded with refugees, mainly women, and children. They have nowhere to go. This is not a drill,” he added.

THIS IS NOT A DRILL 3.30 pm EST pic.twitter.com/CAZmfCf7Wl