Prince Harry had his name in lights as he was greeted with wild cheers and a standing ovation by a rapturous crowd during a speech at a star-studded concert in Los Angeles on Sunday, while his heavily pregnant wife Meghan Markle stayed at home. 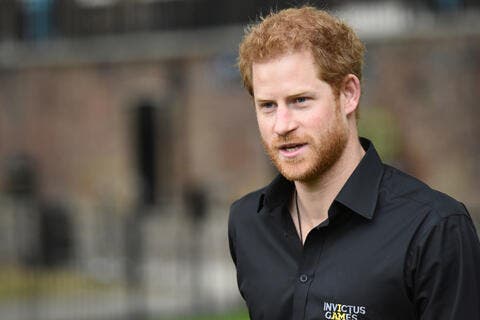 Harry, 36, told the audience of vaccinated frontline workers 'every single one of you are awesome' before urging them to 'look beyond ourselves' as he joined A-list Hollywood celebrities at Vax Live - an initiative to encourage rich countries to share vaccines.

After an announcer read out an introduction, 'Please welcome Vax Live campaign chair Prince Harry, the Duke of Sussex', the royal walked onto the stage to a rock star-style reception, with his name beamed in giant letters on a flashing screen behind him.

Harry, who appeared in public for the first time since the funeral of his grandfather, Prince Philip, delivered a five-minute address calling for vaccines to be shared with poorer countries, which was regularly punctuated by more rapturous cheers.

Speaking in a markedly different accent than his previous Queen's English, Harry said: 'We must look beyond ourselves with empathy and compassion for those we know, and those we don't. We need to lift up all of humanity and make sure that no person or community is left behind.'

The event - which was being recorded for broadcast on TV on May 8 - was the first speech Harry had given since he and Meghan made a series of damning claims about their family during an appearance on Oprah. The Duchess of Sussex is expected to be recording a message to appear in the final broadcast.

The royal was among many high profile stars - including Jennifer Lopez, Selena Gomez, Gayle King and Ben Affleck - to take the stage at Vax Live, which was hosted by campaign organisation Global Citizen at the So-Fi Stadium in Inglewood.

Harry and Meghan, 39, are Campaign Chairs of Vax Live, which 'aims to inspire vaccine confidence worldwide and help get the COVID-19 vaccines to everyone, everywhere' - according to Global Citizen.

In promoting the event organizers said the Duke and Duchess of Sussex would deliver 'an important global message for vaccine equity'.

Meghan, who is several months' pregnant with the couple's second child, trusted Harry to share that message on her behalf as she stayed home on Sunday.

In his address Harry said: 'Tonight is a celebration of each of you here, the vaccinated frontline workers in the audience and the millions of frontline heroes around the world.

'You spent the last year battling courageously and selflessly to protect us all. You served and sacrificed, put yourselves in harm's way and with bravery knowing the costs. We owe you an incredible depth of gratitude, thank you.'

He continued: 'We're coming together because this pandemic cannot end unless we act collectively with an unprecedented commitment to our shared humanity.

'The vaccine must be distributed to everyone everywhere. We cannot rest or truly recover until there is fair distribution to every corner of the world. The mission in front of us is one we cannot afford to fail out and that's what tonight is about.

'The virus does not respect borders and access to the vaccine cannot be determined by geography. It must be accepted as a basic right for all and that is our starting point.

'None of us should be comfortable thinking that we could be fine when so many others are suffering. In reality, and especially with this pandemic, when any suffer, we all suffer.

'We must look beyond ourselves with empathy and compassion for those we know, and those we don't. We need to lift up all of humanity and make sure that no person or community is left behind.

'What we do in this moment will stand in history and tonight, we stand in solidarity with the millions of families across India who are battling a devastating second wave.' 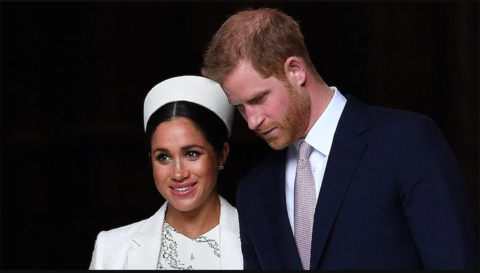 Meghan, Prince Harry Will Not Choose a Royal Name For Their New Baby

The concert marked the biggest event to take place yet at the So-Fi Stadium, which opened in the midst of the pandemic last September.

The stadium has space for 70,000 people but it was unclear how many were slated to attend the Vax Live concert.

The ticket disclaimer required all attendees to have received their final dose of COVID-19 vaccine no later than April 18 - allowing the required two-week time frame to be considered fully vaccinated.