The daddy-daughter tattoo is back on the front page.

Viewers of Sen Çal Kapımı (You Knock On My Door) series re-shared a picture of actor Anıl İlter he'd posted on October 26.

At the time, Anıl revealed the new tattoo on his chest. It was a picture painted by his daughter that shows both of them with a note from her: 'my dear father'.

Like the caption stated, İlter promised his daughter to keep the tattoo that she drew.

İlter's followers highly engaged with the picture because of the success he's achieving in Sen Çal Kapımı as he plays Engin Sezgin.

Instagrammers also recalled Hazal Kaya's tattoo as she did a similar one to İlter's. It was a drawing of Hazal holding her son Fikret's hand, prompting followers to ask if this is a new Turkish parent-child tattoo trend. 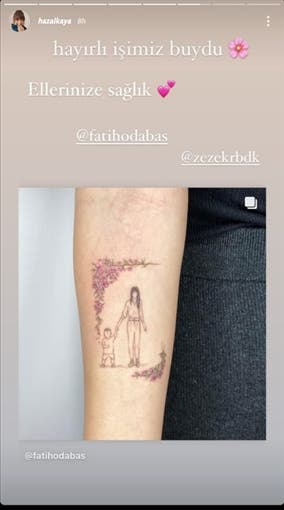 On the other hand, Turkish actress Nihan Şahenk has been added to the cast of Sen Çal Kapımı.

Şahenk's role has not been revealed yet, or whether she is a main character or just a guest of honor as she appeared on next episode's ad.