Published November 14th, 2021 - 08:38 GMT
Her latest album has already broken one Spotify record
Highlights
Taylor Swift announced the release of a new music video for the song I Bet You Think About Me (Taylor's Version).

Taylor Swift dropped a recorded version of her album 'Red' and called it 'Red' Taylor's version.

The singer then released her directional debut in the form of a short film, ''All Too Well' which is named after the fifth track on the record.

And now, the 31-year-old has announced a surprise new music video for the 26th song on the album, "I Bet You Think About Me" on Sunday, which features the vocals of singer Chris Stapleton.

The clip shows a tiered white cake with two red lines scratched into it, followed by a hand forcefully taking a chunk out of the dessert to reveal a red sponge layer.

SURPRISE! NEW MUSIC VIDEO TOMORROW at 10am ET 🚨 I finally got to work with the brilliant, brave, & wickedly funny @blakelively on her directorial debut. Join us as we raise a toast, and a little hell. https://t.co/Gm4xT1vuNk pic.twitter.com/2Qh7KEVUpD

She continued: 'I finally got to work with the brilliant, brave, & wickedly funny @blakelively on her directorial debut. Join us as we raise a toast, and a little hell.'

Blake, 34, had also teased the video on Sunday as she shared the same video with the caption: 'Tomorrow. 10am ET.'

And on Saturday, Taylor performed her 10 minute long  ballad "All Too Well" on "SNL"

Shot on 35mm film with cinematography by the brilliant @the_rinayang. Plan your watch parties or grab your blanket and curl up into a ball. However you want to watch All Too Well The Short Film, it’ll be out tomorrow on YouTube at 7pm Eastern. 🥲 https://t.co/YzOtPK5Hzd pic.twitter.com/SWAlziJ6bC

"All Too Well," has already gained more than 22.5 million views on YouTube since it premiered on Friday. 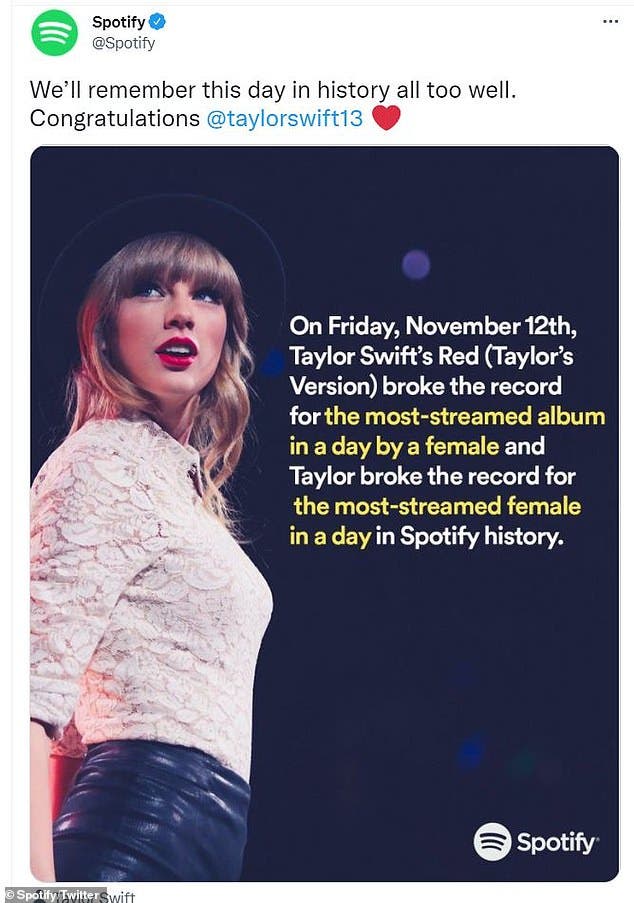 Her latest album has already broken one Spotify record, 'most streamed album in a day by a female' with her also breaking the record for 'most-streamed female in a day in Spotify history.'   A spokesperson for the streaming platform had confirmed the news via Twitter and added 'We'll remember this day in history all too well.'