Published November 21st, 2022 - 11:11 GMT
she found out that he had lied to her
Highlights
Neslihan Atagül can be seen attacking her husband Kadir Doğulu 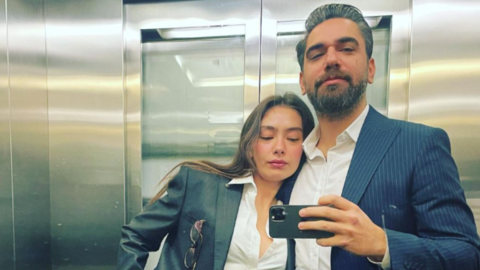 The video, which was a scene from their series 'Ala Masharef Alleil' trended all over social media, and he suffered a strong setback with low viewing rates

The reason behind Neslihan attacking Kadir was she found out that he had lied to her when he dealt with her as if he was his brother Ahmed in the messages, as she previously warned her not to lie to her.

Their joint series 'Ala Masharef Alleil' caused great controversy, as previously the couple could be seen sleeping in an open grave, and according to a Turkish journalist, the Turkish stars also practice such rituals in their real lives too due to following western religions.

Earlier, Kadir revealed that he practices these rituals, with unusual activities.

Members of the religion the couple follow treat each other like brothers and sisters, and provide financial and moral support, and the men in the group refer to their fellow female members as 'sister'.

Each member of the group have their own nickname, Kadir however, had the same but with the development that he made in the recent period, he was raised to the rank of “Darwish” and those close to him called him Kadir al-Darwish.