ALBAWABA - Al Hanouneh folklore dancing troupe certainly made its mark at the Amman Palace of Culture in full colourful regalia that entertained the audience and sent them into a reverie of song about Palestinian culture and identity.

Their concert at the Amman Palace of Culture was in full color and artistic brilliance. It is held annually made to commemorate the 1976 Arab Lands Days when six Palestinians were killed by Jewish soldiers who were protesting the Israeli government's decision to expropriate thousands of acres of Palestinian lands illegally.

This is the first cultural concert held in three years because of the coronavirus restrictions in Jordan. It speaks much of traditional songs and sound related to Palestinian identity, land possession, resistance and the fight against occupation through symbolic, cultural, artistic means and movements that keeps the Palestinian dream alive.

On stage with a full orchestra was a coral of musicians, vocalists and traditional dancers who sought to emphasize the issue of Palestine as a living, breathing heart that sought to emphasize existence through culture, identity, folklore and impressive threaded and embroidered dress-wear worn by men, women, children and their kin. 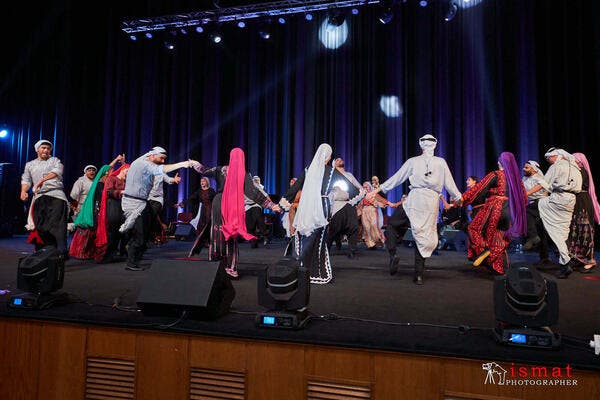 It was a rolling concert along memory lane. At any one time, there were 10, 20, 30, 40 and 50 trotting folk dancers on stage designed to enthuse different concepts of belonging whilst moving to the tune of powerful male and female voices at the back of the stage.

The audiences listened, clapped, danced and joined in the corals that were politically thrilling with distinct messages about identity, existence and holding on to the land with songs to such cities as Nablus and Ramallah.

Al Hanouneh had long represented the Palestinian "voice" through its art and style of folklore dancing and distinctive sketches about society in Palestine.

Al Hanouneh is a professional group of artists with a purpose as reflected in their design of embroidered dress-wear which coralists kept changing to represent the different areas of Palestine. The threads, weaving, style and color represent different, areas, towns and villages in Palestine.

The corals was beautifully made on stage, a panorama of song, culture and politics that was carefully choreographed through professional trainers. The dancers moved on stage with agility, poise, lots of grace and plenty of twirls through their dabkeh.

It was a bonanza of an evening that will continue to serve as a cultural pedestal.