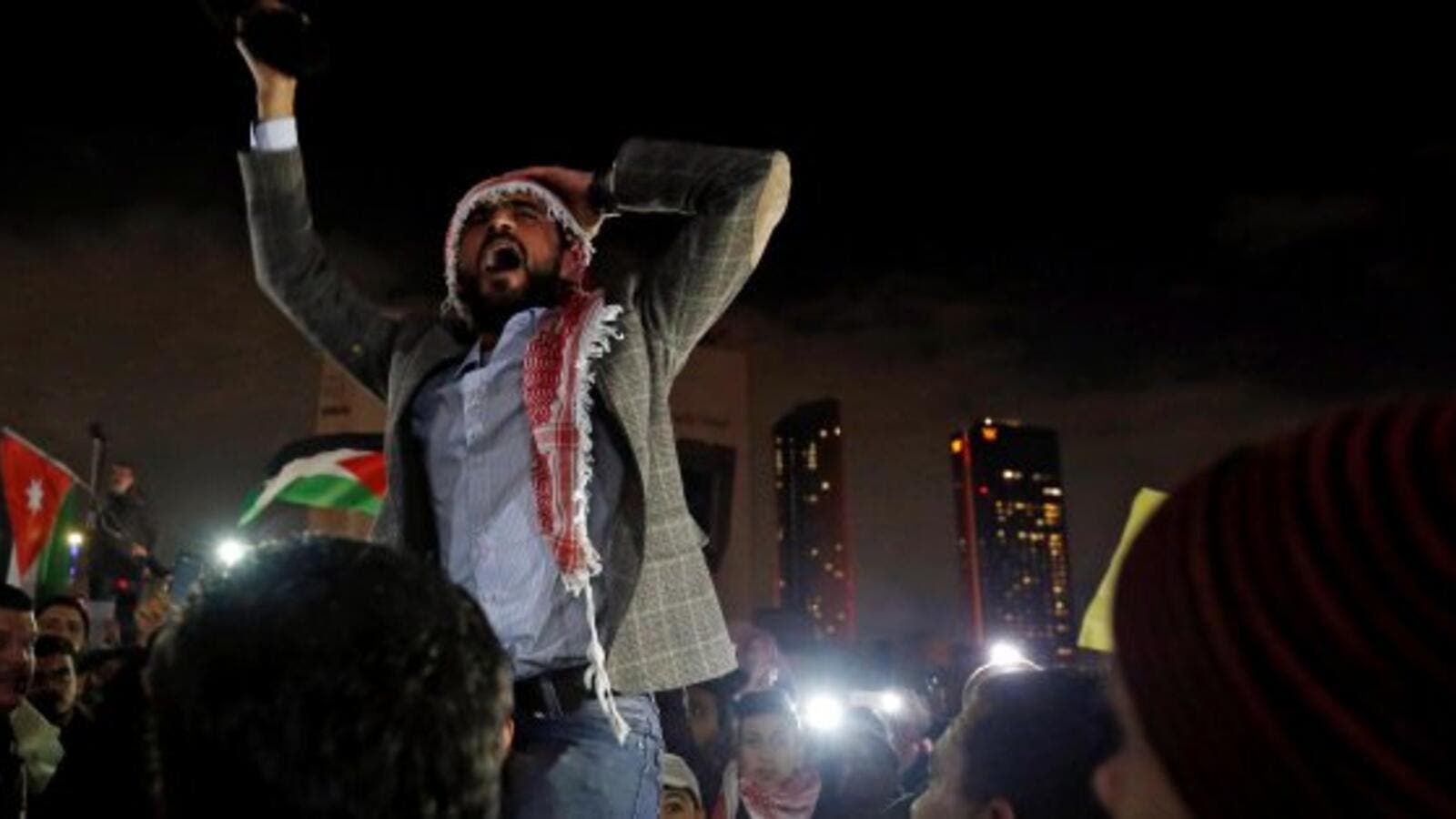 Up to two thousand Jordanians from various parts of the country participated in the protest on Thursday near the Fourth Circle in Amman, demanding constitutional reforms and the release of political detainees, including activists who participated in the demonstrations last Thursday and Friday.

Demonstrators called upon the country’s leadership to “take responsibility and take action”.

Other demands ranged from dismantling Parliament to ousting the government and constitutional monarchy, as chants touched on public and foreign policy, calling to put an end to “excessive taxation” and issuing “ultimatums” on corruption.

Friction was intermittent, as gendarmerie personnel had to use force at times to contain the protest from spilling into the main road, before a group of demonstrators managed to break the siege.

Media reports say at least two police personnel were directly attacked and five armed protesters were apprehended in possession of bladed weapons, said to be responsible. But activists on the ground say the detainees were among the leaders of the protest, and argued that they were not armed.

One of the participating activists Rawan Shamayleh said: “The detainees broke through the police shield wall, that’s why they arrested them.”

Footage on social media purportedly showed police personnel beating a photojournalist as he tried to flee the batons, while one of protestors was shown bloodied standing among the crowd.

Later, authorities issued a statement, advising journalists and reporters to heed police instructions and stay away from points of contact and friction.

Tear gas was used as protesters tried to block the road.

The protest, which started with some 500 people and grew to almost 2,000 within three hours, utilised the Jordan Hospital’s parking lot as its ground zero, and began pushing from there, to take the main road, connecting the Fourth and Interior Ministry circles, but police were deployed along the road, well ahead of the protest.

A group of protesters tried to reroute from the parking lot to the circle between Shmeisani and Abdali Boulevard, going around the gendarmerie blockade, to which the authorities responded with tear gas and more shield walls.

Among the protesters, current and former MPs, including Saddah Habashneh, Jamil Nimri and Hind Al Fayez, were also seen participating.

In an exclusive statement to The Jordan Times, Habashneh said: “The House of Representatives has failed the people, and therefore has lost all legitimacy. I support the people and their rights, including the dissolution of Parliament.”

Lawyers with the Jordanian Bar Association also joined the protestors demanding the immediate release of the detainees.

Board member and President of the Bar’s Freedoms Committee Walid Odwan described the arrest of political activists to The Jordan Times as “a blatant attack against our constitutional freedoms and the rights safeguarded by the international charters Jordan has signed. No citizen should be arrested for expressing their opinion,” Odwan said, stressing that the cybercrimes law, which has been withdrawn from the House for amendments, is but another incursion against the rights guaranteed in the Constitution.

Members of various movements and parties were present at the protest, including the Jordanian Communist Party and the Jordanian Democratic Popular Unity Party, demanding the release of their comrades, including Bashar Assaf, who was arrested earlier this week, and Saad Alawin, whose arrest dates back months.

Grassroots movements of Ramtha, Theeban, Karak, Mafraq and various governorates and towns also took part in the protest, including the capital’s Hai Al Tafayleh Movement and the Ahrar Amman Movement.