Published April 30th, 2021 - 04:48 GMT
A man uses his phone to film a televised speech by Palestinian president Mahmud Abbas regarding the upcoming Palestinian elections at a coffee shop in the city of Hebron in the occupied West Bank on April 29, 2021. HAZEM BADER / AFP
Highlights
Mahmoud Abbas says they will not hold elections after Israel rejects holding polls in occupied city of East Jerusalem 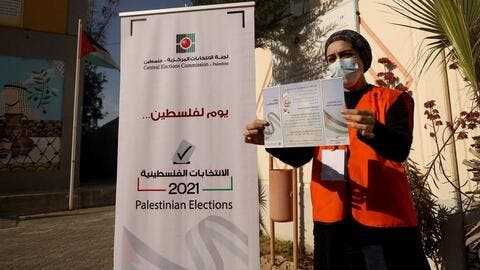 Citing Israel’s rejection of holding elections in the occupied city of East Jerusalem, Abbas said they will not hold elections with Jerusalem excluded from voting.

"We will not go for the elections without occupied Jerusalem. I want elections in Jerusalem as in the West Bank," he said in a televised speech.

He said the Israeli side had not given an answer to the Palestinian request for holding the polls in Jerusalem "because there is no Israeli government to take such a decision."

Abbas added that the European Union informed the Palestinian side of their disappointment over not getting an answer from the Israeli side.

Abbas revealed that the Israelis threatened to detain Hanna Nasser, the chairman of the Central Elections Commission, if he went to Jerusalem to prepare for the elections.

He stressed, however, that once Israel permits elections in Jerusalem, he will hold the polls "within a week."

Hamas, for its part, slammed the expected move of Abbas.

"The decision of delaying [the polls] -- if it happens -- is a serious decision. It is rejected and amounts to tampering with the Palestinian people's greater interests," he said.

Tawil added that holding the polls in Jerusalem is necessary and could be done "technically and politically," without Israeli permission.

Meanwhile, hundreds of angry Palestinians have converged in the central city of Ramallah to condemn the move of the Palestinian president. 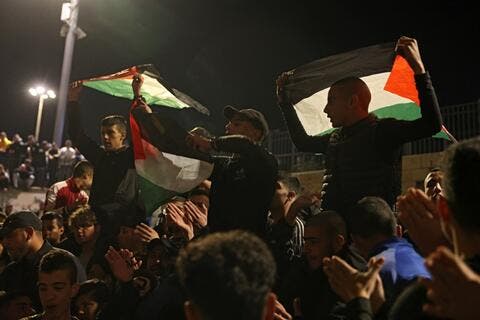 Palestinians Praised For Resisting The Israeli Aggression on Jerusalem

Earlier this week, Al-Quds daily, known for being close to the Palestinian Authority, revealed that Abbas was under Arab and American pressure to delay the polls.

The daily said that the pressure came as there were fears that Hamas might win the elections.