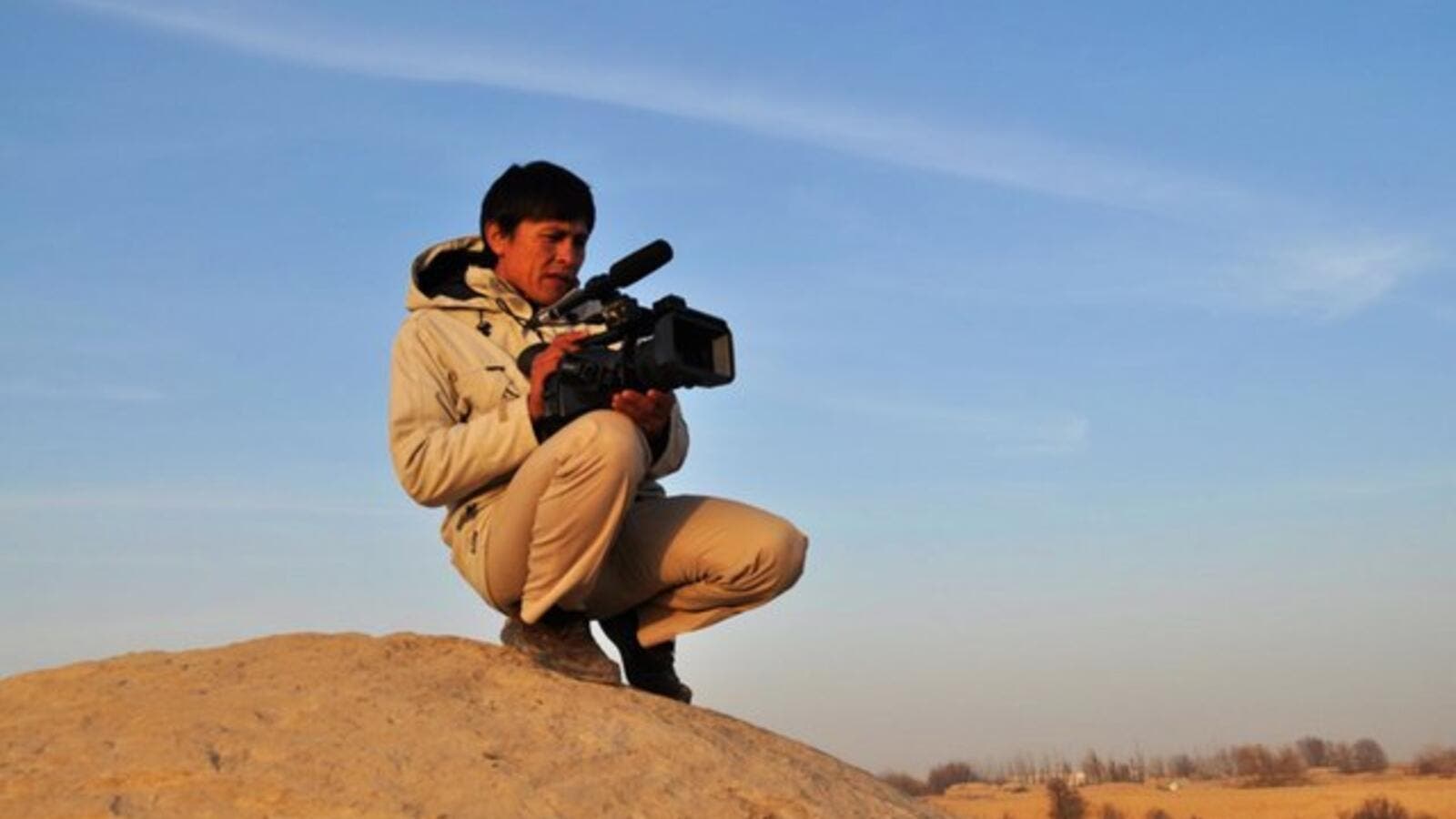 Hassan Nazeri, from central Afghanistan, is an assistant professor of film. He now lives in Germany. He had to lie to Greek coastguards that he was Tibetan to avoid being pushed back to Turkey. (Twitter/Fight for Life)

"Are there any Afghans in your boat?" a loudspeaker blasted in English from a Greek coast guard vessel.

Hassan Nazeri was shocked by the question while he sat in a crowded rubber raft as it sank off the coast of Greece. The 44-year-old Afghan assistant film professor had just fled his country after he had been threatened by militants.

The raft was made for 15 people, but Nazeri was one of 39 refugees packed into the tiny craft in May 2013. Smugglers had given men on the raft two knives and a sharp pen, and instructed them to puncture and sink the raft once they saw the Greek coast guard. Otherwise, the craft might be towed back to Turkey.

The red morning sun hung low over the Aegean Sea as water filled the raft. Children and two women holding infants were crying in fear as water reached Nazeri's waist.

"We don't know these people, but they aren't Afghan," one of the Syrian refugees shouted to the Greek coast guard.

"We can see some Afghan faces," said one of the Greeks, before they relented and took the wet refugees to shore.

Nazeri is a native of central Afghanistan but he lied to the Greek authorities, telling them he was from Tibet. Strongly Asian in appearance, he bought a fake Vietnamese passport in Athens and used it to fly to Germany. Once there, Nazeri was finally honest about his nationality.

He received a residence permit to stay in Germany for three years. But he noticed that the German government discriminates against Afghan refugees.

"The German government lies to its people. They say, 'We have fought in Afghanistan and brought peace ... The Afghan asylum seekers can go home now' – that's not true!" said Hassan Nazeri, Afghan refugee.

Hassan Nazeri was lucky enough to escape before he was tortured or killed. But a young Afghan named Feyez was not as fortunate. The Taliban in Badghis province, northwest Afghanistan, wanted Feyez to sell drugs and rob people. When he refused, they kidnapped him and kept him as a prisoner for six months. The kidnappers nearly beat him to death, smashed his jaw and stabbed him in the stomach. He said there were no options for him; he had to flee, or he would kill himself. Even when he managed to escape, the horror of his trauma haunted him, making living as a normal human being nearly impossible.

"I can't even think about going to Afghanistan," Feyez said. "If I go back, I will die."

While talking about being held captive, he snaps rubber bands around his wrist. His therapist, Ruhin Ashuftah, explains that trauma victims often want to hurt themselves just to be sure they can still feel something, to prove to themselves that they are still alive.

Feyez has noticed that the German policy on Afghan refugees has changed in the two years he has lived here.

“When I arrived here, there was no difference between Syrian and Afghan refugees,” Feyez said. “Now I see Afghans have a lot more trouble getting education or language training.”

“If the [ruling political parties] are not able to somehow get control over this refugee wave, they will lose the vote of the people to the right wing… But the price is democratic laws and human rights” Ruhin Ashuftah, therapist, added.

Still, he enjoys living in Germany, and he wants to become a cook so he can feel useful in his new home.

The man behind Feyez’s recovery is Ashuftah, who left Afghanistan as a child after the Soviet invasion that began in 1979. Now Ashuftah is a therapist who works with refugees. He speaks Dari and Pashto, so he can connect with traumatized Afghans in their native language.

Ruhin and Feyez have found their place in Germany, but the future for other Afghans is less certain.

According to European Union statistics, nearly four times as many Syrians as Afghans have applied for asylum in Germany over the past four years. More than eight times the number of Afghans as Syrians have had their asylum applications rejected.

“People from Afghanistan are not generally accepted as refugees,” said Uwe Ram, executive director of International Co-operation for the City of Hamburg.

“The reason why a person from Afghanistan has to flee to Germany is very hard to prove.” Ram said. “They came through many countries, for example, Turkey, where there was no danger for them any longer,”

Unless an Afghan has received a specific threat, such as someone in danger for doing human rights work, the German government generally doesn’t grant them asylum, Ram explained.

Zahra Sadat is a 29-year-old human rights activist from Afghanistan, who came to Europe in November 2013. She received threats on social media from militants angered at her work. While Sadat was in Germany, several of her friends and co-workers were killed in a suicide bombing on her office in Kabul.

"Lots of people are killed by Taliban, by warlords. Every day Afghan people go to work, go to school, go to university and they know something will happen to them."
– Zahra Sadat, human rights activist

In December 2014, one year after arriving in Germany, Sadat's asylum application was denied. The German government ordered her to leave the country. "Human rights defenders and journalists are under big pressure in Afghanistan," she said. "For me it was not [a] hard decision to leave this country. I had to do it."

Sadat said her situation would be different if she was Syrian. "They receive [a] visa for three years very soon," she continued. "But for me and for most Afghans it's not like this.

"It's very difficult to explain how much pressure you have as a refugee," Sadat said. "Suddenly, you understand that you lost everything. You apply for asylum and then you have to wait for a long time and until then you aren't allowed to do anything. You can't work."

Sadat came to Germany for her own safety, but many Afghan families come to Europe so their children can have a better future.

"Our generation is leaving Afghanistan only for our children," said Masood Gawhari, a former medical student. He came to Germany with his wife and two young children a few months ago.

Gawhari and his wife worked at a military hospital in Kabul. He said that people who work for the governments are in constant danger.

Gawhari has applied for asylum, but he knows it will be difficult to prove his family would be in danger back in Afghanistan. He said other groups of refugees have an easier time.

“The Syrians don’t have to prove that Syria is an unsafe country,” Gawhari said.

The European Union reports there are nearly 65,000 who have pending asylum applications. The future is unclear for them, but many Afghans in Germany know they can’t go back home.

This story originally appeared as part of the Flight for Life project. Read more about the making of one of the most ambitious student reporting responses to the refugee crisis.