Amnesty: Russian Attack on Mariupol Theater is a War Crime

Published July 1st, 2022 - 05:52 GMT
A Russian serviceman patrols near the Azovstal steel plant in Mariupol, amid the ongoing Russian military action in Ukraine, on June 13, 2022. (Photo by Yuri KADOBNOV / AFP)

A Russian airstrike on a Mariupol, Ukraine, theater where hundreds of civilians were sheltering in March was a war crime, Amnesty International said Thursday. 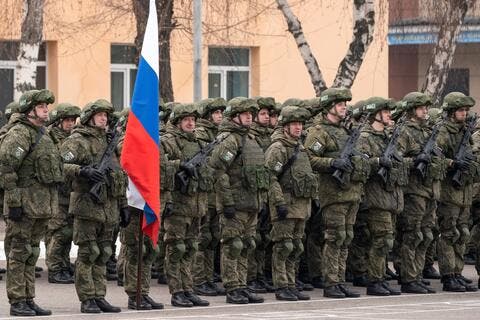 Why Did Russia Abandon Snake Island?

The strike destroyed the Donetsk Regional Academic Drama Theatre on March 16, killing at least a dozen people. Ukrainian government officials estimated about 300 died in the bombing, but Amnesty International said it has only been able to confirm 18, a figure it says will likely go up.

An investigation by human rights group Amnesty International has concluded that Russian military forces committed a war crime when they struck the Mariupol drama theatre in Ukraine in March.

"After months of rigorous investigation, analysis of satellite imagery and interviews with dozens of witnesses, we concluded that the strike was a clear war crime committed by Russian forces," said Agnès Callamard, Amnesty International's secretary-general.

"Many people were injured and killed in this merciless attack. Their deaths were likely caused by Russian forces deliberately targeting Ukrainian civilians."

At the time of the attack, hundreds of people, including children, were sheltering inside and the world "children" was written on the ground outside the building, visible to aircraft above, Ukrainian officials said.

Investigators with Amnesty International said a Russian fighter jet dropped two 500kg bombs on the theater on a clear day.

"The theater was clearly recognizable as a civilian object, perhaps more so than any other location in the city," Amnesty International said in its report, "Children: The attack on the Donetsk Regional Academic Drama Theatre in Mariupol, Ukraine."

Russian government officials declined responsibility for the airstrike, instead blaming it on the Azov Regiment, a volunteer militia under the National Guard of Ukraine that operated out of Mariupol. Russia said the attack was a false-flag operation by the far-right group to stir up anti-Russian sentiment.

The organization called on the International Criminal Court and others with jurisdiction over the alleged crimes to investigate the bombing.

"All those responsible must be held accountable for causing such death and destruction," Callamard said.