The Banned Bombs Being Dropped on Idlib

The ongoing Syrian regime-led offensive against the last stronghold of rebel and jihadi groups is currently underway in northern Hama and Idlib provinces.

The assault, which followed after months of intense Russian and Syrian airstrikes, started on May 6 and has already killed almost 300 civilians and displaced over 300,000. But regime and Russian forces have relied on particularly brutal strategy to make life in rebel-held territory unlivable and have used a wide array of destructive weapons to achieve this end.

Though horrific, the tactics being deployed now in Idlib and northern Hama closely follow a key strategy the regime has used since it began losing territory early in the civil war: terrorize civilians in rebel-held territory so thoroughly that they are pressed into making an impossible choice, try to brave the bombing campaign or relent and move to the relative safety of regime-controlled areas.

Here’s a breakdown of the types of bombs the regime and its allied forces are using in Idlib right now.

#Syria: every day hectares of crops/agricultural land go up in smoke in Greater #Idlib due to Regime bombardment. Scorched earth policy Assad started in conjunction with N. #Hama Offensive. pic.twitter.com/HqZVVB6o23

In conjunction with a ground offensive on rebel and jihadi-held territory, the Syrian regime and its allied forces have decimated opposition farmlands with incendiary munitions.

Delivered through a variety of means including GRAD rockets and helicopters, incendiary munitions are designed to spark fires that rage and destroy a large land area. This makes them particularly useful in so-called scorched earth strategies, where the goal is to make a targeted area uninhabitable by either side.

Already, fires have burned a significant portion of the arable land in opposition-controlled areas, affecting the region’s ability to feed itself and maintain a working economy.

Imagine that you live under this fire..
Heavy shelling with rockets containing highly incendiary materials by regime forces, on #KhanSheikhoun City in southern #Idlib after midnight, and causing huge fires within the agricultural crops. pic.twitter.com/B4ojjd7LgD

Throughout Iraq and Syria, ISIS forces have also been burning vast areas of farmlands. Iraq, which has been hit particularly hard by ISIS-set fires, has lost about 40 percent of its agricultural capacity, and many farmers have been forced to collect their crops prematurely.

Since the start of the regime offensive to retake areas of Idlib, approximately 25 hospitals in opposition territory have been hit by air strikes and have been damaged or completely destroyed. It is suspected many hospitals have been targeted with bunker buster missiles.

Some of these hospitals were built into rock, meters below the surface in the hopes they could avoid being effectively targeted.

Dr Zaher Sahloul, the president of MedGlobal, visited destroyed hospitals in Idlib and recalled what he saw to The Independent.

“They dug it in the heart of the mountain. It’s like a cave, but inside it’s like any other hospital,” he told The Independent. “It was still bombed and went out of service.

“They are using sophisticated missiles. They are becoming very successful in getting these places out of service. It is happening every day,” he added.

“The al-Maghara cave hospital, in the town of Kafr Zita in Hama province, was hit by five missiles or bombs that penetrated 18m (60ft) of rock and destroyed much of the underground structure,” a local aid worker told reporters at the time.

The al-Maghara cave hospital, in the town of Kafr Zita in Hama province, was hit by five missiles or bombs that penetrated 18m (60ft) of rock

Though the information is difficult to verify, the only missiles able to penetrate deep into layers of rock and destroy a target inside is a bunker buster missile; a type of missile that delays its explosion only after achieving a certain depth or being triggered once it breaks through to an open space.

They were originally developed to target bunkers built deep underground or in mountains, but have since been used against civilian targets seeking safety.

In Idlib and northern Hama, the disproportionate targeting of hospitals has led many still operating in Syria to refuse sharing their coordinates with the U.N., which was reportedly passing the information onto Russia.

In addition to incendiary and bunker buster missiles, the regime has unleashed a torrent of indiscriminate cluster munitions onto civilian areas.

Cluster bombs comprise of cannisters designed to explode mid-air, dropping a flurry of bomblets that subsequently explode on impact with the ground, though a substantial portion of them are often duds and do not immediately explode.

Because they are indiscriminate, they are used almost exclusively against civilian populations deep behind the frontlines as a way of instilling fear into opposition-controlled areas.

One survivor to a cluster bomb attack in Kafr Nabl on May 23 told Human Rights Watch, “Cluster munitions are the worst, because they are used with the intent to mainly harm humans. All the shrapnel. And then if they don’t explode, the risk remains – it prevents you from moving in your own house.”

Barrel bombs, a crude and often improvised weapon consisting of a large canister filled with shrapnel or high-explosive munitions, have been a mainstay in the regime’s arsenal since the conflict intensified in 2014-15. So far, the Idlib offensive has been marked by regular barrel bomb attacks.

They serve a similar type of purpose to cluster munitions: to maim and terrorize civilian populations. Barrel bombs are unguided, and the regime appears to deploy them simply by flying a helicopter over an area and dropping the barrel.

In the days leading up to the offensive, barrel bombs were extensively used to damage civilian infrastructure and hit rebel targets.

“We have information that educational facilities, health facilities and residential areas are being bombed by helicopters and planes,” U.N. regional humanitarian coordinator Panos Moumtzis told Reuters on May 2.

“The barrel bombing is the worst we have seen for at least 15 months.” 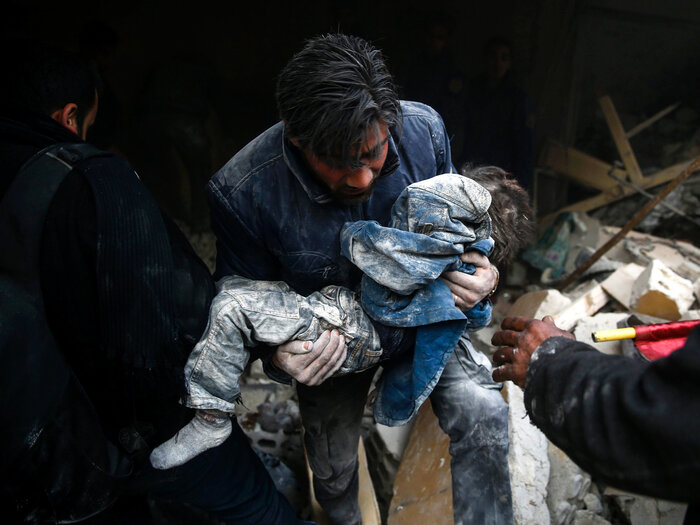 The Syrian regime began focusing on using indiscriminate weapons that are designed to obliterate crops, level hospitals and terrorize civilians since they began losing territory and manpower to the rebels at the beginning of the war.

Tobias Schneider, a researcher with the Global Public Policy Institute, a think-tank based in Berlin, told Al Bawaba that Bashar al-Assad began shifting strategies away from defending frontlines and focused more on depopulating rebel-held territory. After that shift, indiscriminate weapons including toxic chemicals, spiked in usage.

“What all of these [attacks] do is they force civilians into impossible choices, of hierarchies of suffering,” Scheider said. Civilians are compelled to judge whether it is worth staying inside rebel-held territory, or whether they should simply leave the country entirely or move into regime-controlled areas.

The strategy largely worked: millions of Syrians inside rebel-held areas fled into Turkey, Jordan Lebanon and Europe. As the regime began to seize the upper hand with extensive help by Russia and Iran, they continued this tactic as a way to distance civilians from rebels and pressure rebels into surrendering.

When regime forces were advances into Douma in April 2018, rebels trapped inside the territory fought for weeks without surrendering despite the overwhelming force used against them. In response, the regime dropped chlorine gas into the area, killing dozens and injuring hundreds.

Schneider’s research team interviewed dozens of rebels and civilians involved in the Douma siege and found that the chlorine attack broke their willpower. “At this point, it was no longer possible to hold out, no longer possible to expect any sort of compromise.” A Russian commander allegedly threatened a rebel commander with another such attack, and the rebels surrendered.

Now in Idlib, the same type of terror-focused strategy is being used to devastating effect.