Beijing Olympics organizers called the widespread reports of human rights abuses in China's Xinjiang Province "lies" on Thursday and defended the government's claim to Taiwan while complaining about critics "politicizing" the Games. 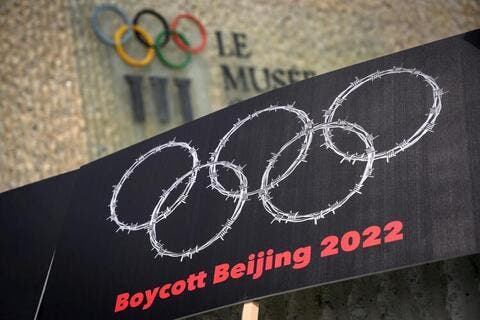 Uyghur Turks in The US Protest The 2022 Beijing Winter Olympics

The United States and several allies chose not to send official delegations to the Beijing Games as a diplomatic boycott over rights concerns, particularly the treatment of the mostly Muslim Uighur minority in Xinjiang.

The International Olympic Committee is "failing to conduct due diligence to ensure that its Beijing 2022 uniforms were [not] connected to forced labor in Xinjiang." https://t.co/Gr5xXl3boC

"The so-called forced labor in Xinjiang is lies made up by deliberate groups," Beijing 2022 Organizing Committee spokeswoman Yan Jiarong said during a press conference. "Authorities have already disputed such false information with a lot of solid evidence."

Researchers say that an estimated 1 million Uighurs have been held in re-education camps in Xinjiang, where they are subject to abuses that include torture, forced labor and forced sterilization. The White House has described China's treatment of the minority population as "ongoing genocide and crimes against humanity."

China claims the camps are vocational training centers used to help counter religious extremism and terrorism in the region.

A Uighur athlete, cross-country skier Dinigeer Yilamujiang, lit the Olympic cauldron at the Opening Ceremony on Feb. 4, in a gesture seen as a defiant response to the criticism and controversy that swirled around the lead-up to the Games.

Yan called questions about Xinjiang "irrelevant to the Winter Games" but said she was obliged to add her comments on two occasions when the subject was raised by reporters.

"These questions are very much based on lies," Yan said.

Her remarks were the first time Beijing organizers addressed the topic directly during the Games.

Yan also addressed a question about Taiwan, which Beijing maintains is a breakaway province that will one day be reunited with China, by force if necessary.

China opposes Taiwan entering into any official treaties or international organizations under its "One China" policy. Athletes from the democratic and self-governing island, which maintains official diplomatic relations with only 13 countries, are required to compete under the Chinese Taipei banner at the Olympic Games.

"[Taiwan] is something we really have to take a very solemn position on," Yan said. "There is only one China in the world. Taiwan is an indivisible part of China -- this is a well-recognized international principle."

Yan Jiarong, the Beijing Organizing Committee for the Olympic Games (BOCOG) spokesperson, says, "so-called forced labor in Xinjiang is lies made up by deliberate groups," on Uyghurs, and "there is only one #China," on Taiwan's participation at the games.https://t.co/Sr8KnjLXcg

Both the International Olympic Committee and the Beijing organizers have looked to sidestep any human rights questions around China hosting the Games by drawing a line between sports and politics. 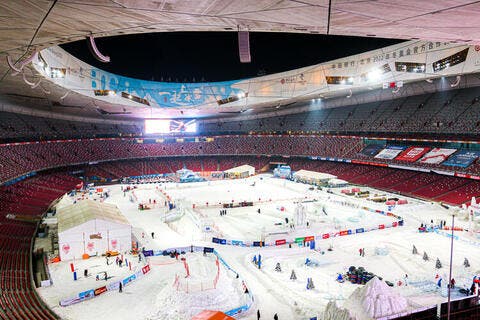 "There are many views on all sorts of things around the world, but our job is to make sure the Games take place and the magic of the Games can happen and we can improve the world through sport," IOC spokesman Mark Adams said at the press conference Thursday.

"We are always against the idea of politicizing the Olympic Games," Yan added.