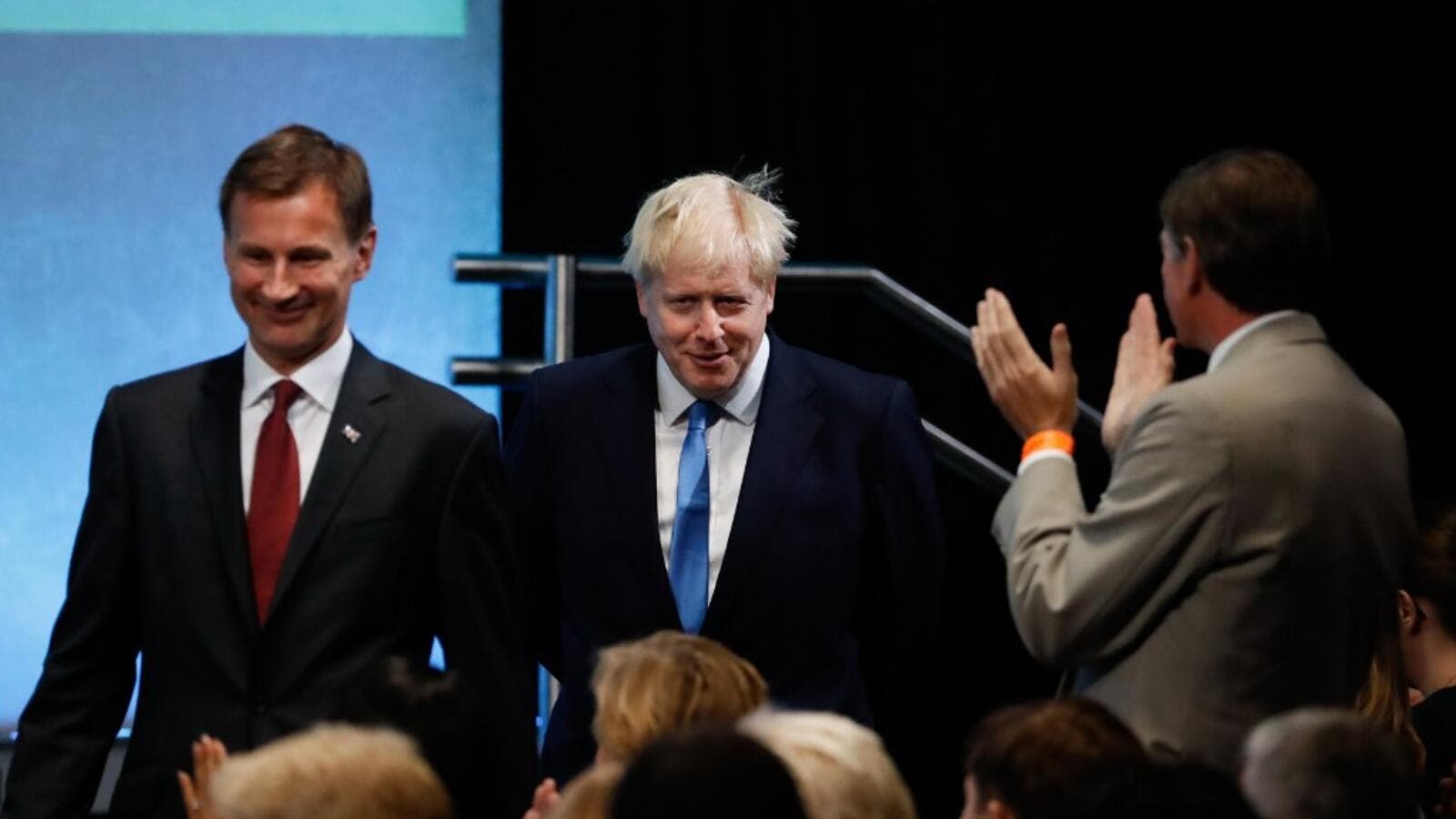 Conservative Party leadership candidates Jeremy Hunt (L) and Boris Johnson (C) arrive in the auditorium at an event to announce the winner of the Conservative Party leadership contest in central London on July 23, 2019. (Tolga AKMEN / AFP)
Highlights
The newly-elected Tory leader will take over from Theresa May as the Prime Minister tomorrow afternoon.

Boris Johnson is gearing up for a huge Brexit battle today as the Tories prepare to install him as their new leader.

Barring a last-minute shock, Mr Johnson was named as the new Conservative chief at 11.45am following a bruising six-week contest against rival Jeremy Hunt.

Mr Johnson refused to answer questions from reporters as he arrived at his campaign base this morning, merely saying it was 'all to play for'. Family members including father Stanley, sister Rachel and brother Jo were among those arriving to hear the dramatic result at the Queen Elizabeth II centre in Westminster.

He is already plotting his next move, with allies determined to forge ahead with multi-billion pound promises to cut taxes - even if it means increasing government borrowing.

However, Mr Johnson is also facing a potentially catastrophic Tory mutiny as MPs mobilise against his 'do or die' vow to secure Brexit by Halloween - even if it means crashing out without an agreement.

Education minister Anne Milton quit this morning in advance of Mr Johnson's expected coronation, saying she had 'grave concerns' and could not fall into line with his Brexit policy.

Justice Secretary David Gauke - another of around half-a-dozen ministers who have said they will resign rather than serve under Mr Johnson - has issued a stark that Parliament will find a way to block No Deal.

He held talks with Chancellor Philip Hammond and Mr Gauke last night, but while discussions were 'friendly' they did not back down on their opposition to No Deal.

Sources in Mr Johnson's camp are predicting he will secure more than 60 per cent of the vote, giving him a 'free hand' to sack his enemies and steer the Tories on a new course.

He has planned a short acceptance speech in which he will repeat his campaign pledge to take Britain out of the EU on October 31, with or without a deal, and urge his party to turn its guns on Jeremy Corbyn.

But he is also expected to make an appeal for party unity following a fractious campaign which has seen Tory Remainers vow to bring down his government if he tries to pursue a No Deal exit.

Sir Alan, a long-time critic of Mr Johnson, invoked the Queen as he attempted to force a confidence vote in the Commons today – but the move was ruled out by the Speaker John Bercow.

International development secretary Rory Stewart also informed Mr Johnson yesterday that he would be resigning from the Cabinet before he takes power, following the lead set by Philip Hammond and justice secretary David Gauke.

Mr Stewart indicated he would join the band of Remainer rebels on the Tory backbenches, saying: 'There is a majority of two, and I have at least three friends.'

Mr Gauke told the BBC Radio 4 Today programme he believed there were 'parliamentary mechanisms' that could prevent No Deal which would 'not necessarily' involve bringing down a Johnson administration.

He stressed that he would not vote against a Tory government in a motion of no confidence if it was heading towards a no-deal Brexit.

But Mr Gauke warned: 'There is a clear majority in the House of Commons that doesn't want to leave the EU without a deal; I think that will become very clear in the autumn.'

In all, up to a dozen ministers are expected to jump ship in the next 36 hours before Mr Johnson officially becomes PM tomorrow afternoon.

Allies of Mr Johnson insist he is determined to ensure his premiership is not only about Brexit.

They want to push a new insurance system for social care, boost schools funding and increase the higher tax threshold to £80,000.

During the campaign Mr Johnson made spending pledges that have been calculated at more than £26billion - the estimated headroom Mr Hammond left in the public finances to account for Brexit disruption.

He wants to raise the national Insurance threshold to £12,500 to help low earners, which would cost around £11billion, increase the minimum wage, and cut stamp duty.

But supporters of Mr Johnson told the Telegraph he would press ahead with key policies by borrowing if necessary.

'We are talking about a fiscal loosening of less than 1 per cent of total public spending. It would do a lot to get things moving for the middle classes, to get them spending more money,' one aide said.

A former minister in Mr Johnson's camp added: 'In order to honour Boris's spending pledges, the next budget is going to have to put a temporary freeze on deficit reduction.

'Of course it is important to continue fixing the roof but there is going to have to be some flexibility there to give the economy the post-Brexit boost that it needs.'

On the eve of what is likely to be a dramatic few days, former prime ministers Tony Blair, Gordon Brown and John Major warned Mr Johnson that pursuing a No Deal Brexit would end in disaster.

If Mr Johnson is elected as Tory leader today he will formally become prime minister tomorrow.

Mrs May will take a final session of PMQs in the Commons before making a valedictory statement in Downing Street.

She will then travel to Buckingham palace to inform the Queen of her resignation.

Whitehall sources said that, despite the government's slender majority, Her Majesty is then expected to send for Mr Johnson.

The former foreign secretary will then begin an immediate Cabinet reshuffle.

Mr Johnson is then preparing to make a Commons statement setting out his programme for government on Thursday, just hours before MPs break up for the long summer recess.

Former Brexit secretary Dominic Raab, who is expected to join the Cabinet, last night played down the prospect of a serious mutiny against the new leader by Tory MPs.

He added: 'I think the number of troublemakers will be relatively few because it will be so obviously self-indulgent.' But attitudes among Tory MPs opposed to a No Deal Brexit appeared to be hardening last night.

Mr Stewart revealed that he had been invited for talks with Mr Johnson, but had told him he would rather quit his Cabinet job than serve in a Government prepared to contemplate a No Deal Brexit. Earlier, Sir Alan resigned with a warning that Brexit had placed a 'dark cloud' over the country.

The minister, who once described Mr Johnson as a 'circus act', wrote to Mr Bercow proposing a Commons vote today on Mr Johnson's acceptability as PM.

He wrote: 'This is the first time in our parliamentary history that the prime minister of a minority government has changed in mid-term.

'Thus the normal assumption that the succession is automatic cannot be said to apply, and his ability to command a majority in the House should arguably be tested before the Prime Minister can safely advise the Queen who should succeed her.'

After the proposal was rejected, Sir Alan warned of a 'constitutional crisis' in the coming months if Mr Johnson loses a confidence vote after becoming PM.

Another rebel Tory, Philip Lee, said of Mr Johnson: 'I don't see how he has got a majority to govern. It's a very, very fragile situation with only a tiny majority.'

In a series of heavyweight warnings yesterday, three former prime ministers spoke out against the risks of pursuing a no-deal Brexit.

Sir John, a high-profile critic of Mr Johnson, said: 'The new PM must choose whether to be the spokesman for an ultra-Brexit faction, or the servant of the nation he leads.'

Mr Blair said Mr Johnson had 'boxed himself in to a No Deal Brexit', while Mr Brown warned of the danger of inflicting 'peacetime self-inflicted wounds'.