Published October 4th, 2021 - 08:56 GMT
A photograph of George Floyd (C) is displayed along with other photographs at the Say Their Names memorial exhibit at Martin Luther King Jr. Promenade on July 20, 2021 in San Diego, California. Mario Tama/Getty Images/AFP
Highlights
George Floyd was killed on Memorial Day 2020 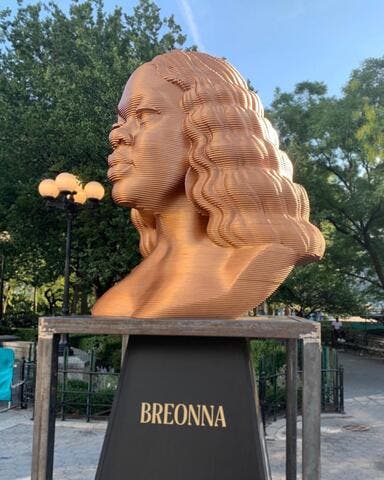 Authorities said police are searching for a suspect with a black backpack who rode a skateboard up to the statue and vandalized it with gray paint, The New York Times reported.

NYPD detective Frances Sammon told CNN that the police have video footage of the incident.

"They show a male ducking down under one of the statues," Sammon said. "He then mixes something together, and, as he skates away, he throws a container of paint at the statue."

Terrence Floyd, a brother of George Floyd, said in a joint statement with nonprofit We Are Floyd Foundation that the act of vandalism was "incredibly disappointing."

"And it just goes to show you how far we still have to go to reach our goal of unity," Terrence Floyd said in a statement reported by The Times.

George Floyd was killed on Memorial Day 2020 after Minneapolis police officer Derek Chauvin kneeled on his neck for more than eight minutes. George Floyd's death sparked nationwide protests against police violence and for racial equality. Chauvin has since been sentenced to more than 22 years in prison for killing George Floyd.

The statue of George Floyd was one of three unveiled in Union Square on Friday as part of Confront Art's SEEINJUSTICE series. The other two busts depict Breonna Taylor, who was fatally shot in her apartment by police in March 2020, and civil rights icon and Georgia Democratic congressman John Lewis, who died in August of last year.

In a statement, Confront Art said the SEEINJUSTICE series was inspired by the events of 2020 that ignited many to stand up in demand for justice.

"The series aims to honor the lives and ongoing messages through art, tying together three iconic people," it said, adding it chose Union Square to display the busts as it has "historically protected the right to free speech and demonstration."

Chris Carnabuci, the artist behind the series, said the death of George Floyd raised awareness of injustice not just in the United States but worldwide.

Following the vandalization of his bust on Sunday, Carnabuci told The Times that such actions are neither productive nor meaningful.

"Actions like this remind us that we have a long way to go, and we will never stop fighting," he said.