Can The New Elite Fix Lebanon?

Published May 18th, 2022 - 08:51 GMT
A billboard set up by the Lebanese Forces (LF) party displays a message in Arabic, reading "we can only thank you" is pictured on a highway north of the capital Beirut following parliamentary elections on May 16, 2022. (Photo by JOSEPH EID / AFP)

Analysts say a divided Parliament will make it difficult for the crisis-hit country to form a government and solve Lebanon’s economic problems, but new faces bring some hope. 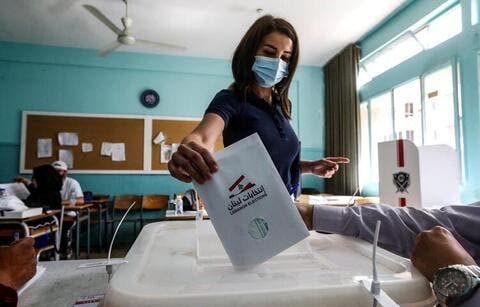 Sunday’s elections in Lebanon ended with what partial results indicate will be a divided parliament, sparking concerns that progress in Lebanon’s road to economic recovery will be a slow and bumpy road after the anticipated poll.

Final results showed the Shia Hezbollah-Amal camp lost its majority, while new independent and emerging players entered the scene after two years of economic crisis that brought the country to its knees.

“We are going to have a parliament that is divided along many different groupings, that sometimes will unite over single issues,” explains Ibrahim Jouhari, a political analyst at the American University of Beirut’s Issam Fares Institute.

“In the middle, you have civil society, emerging parties and independents,” he adds, referring to reformists who emerged mostly from the 2019 “October revolution”, a wave of street protests calling for an end to corruption and the unseating of Lebanon’s entrenched political elite. Reform-oriented candidates secured at least 14 seats in the new Parliament.

“Even they agree on many issues and disagree on others.” Jouhari explained. “People did vote for change. Unfortunately, I think we are going to see some paralysis, some inability to get things done.”

Since 2019, Lebanon has been in the midst of what the World Bank described as possibly one of the three “most severe economic collapses worldwide since the 1850s”, as a result of which Lebanon went from being a middle income country to one where more than 70 percent of the population now lives below the poverty line, according to the UN.

In early April, the country reached a staff-level agreement with the International Monetary Fund (IMF) to release around $3 billion of financial assistance in return for a series of key structural reforms – which the incoming government will be tasked with implementing. While this is not enough to get Lebanon out of the depths of its crisis, proponents believe it could be a building block towards economic recovery.

Lebanon’s financial sector losses are estimated to amount to $68 to $69 billion. The Lebanese pound has lost more than 90 percent of its value since 2019, triggering high inflation and shortages of basic goods and commodities such as fuel and medicine.

Results on Tuesday showed the block led by the Iran-backed Hezbollah-Amal alliance lost its majority in Parliament. While the duo retained all of the 27 seats allocated to the sect according to Lebanon’s confessional-based electoral system - which allots seats proportionally to the country’s main Lebanon’s religious communities – overall the pro-Hezbollah coalition gained 62 seats – down from 71 in the 2018 election and three seats short of the 65 needed to form a majority.

It was mostly Hezbollah’s allies who suffered losses, while their historical foes made inroads: the Christian Lebanese Forces headed by Samir Geagea is now the largest bloc in Parliament with 19 seats, at the expense of the Christian Free Patriotic Movement of president Michel Aoun – an ally of Hezbollah – which went from 20 to 17 seats.

“Considering the call for a boycott from the Sunni community, the fact there is an overwhelming economic crisis and that fuel prices are so high that many people could not go to vote, having the same turnout as 2018 is an extraordinary feat,” Jouhari argued.

Hezbollah, the Iranian-aligned political party and militant group, has lost its majority in Lebanon’s parliament after elections that saw gains by the group’s rivals, according to preliminary results released Tuesday. https://t.co/IGUNtO9FND

Parliament’s largest Sunni party – the Future Movement led by former Prime Minister Saad Hariri – decided not to take part in the elections as he called for its supporters to boycott them.

While some former Future Movement MPs decided to run as independents, in the capital Beirut some Hariri supporters were seen holding pool parties on Sunday instead of heading to the polls, in a symbolic protest against what they see is as a façade election as they argue it is Hezbollah, often referred to as a state within a state, that runs the country regardless of what the Lebanese choose at the ballot box.

The number of independent and emerging candidates that won seats was overall on the higher end of what analysts expected. This is seen as a substantial victory for Lebanese civil society, particularly as those candidates were unable to form a united front ahead of the polls, and some faced threats and intimidation from supporters of traditional parties during their electoral campaigns.

The Lebanese Association for Democratic Elections (LADE) reported that its observers also faced threats and violence in some areas, particularly at the hands of Hezbollah and Amal movement supporters, and were prevented from attending the sorting process in several polling stations.

Those new faces, Jouhari explains, “will have an influence as long as we start having a functioning Parliament, and then a government, and then maybe a President,” he says, referring to the upcoming presidential election later this year.

“We might face a scenario where you have elections and the ‘good people’ [win], but then nothing happens,” Jouhari said.