Can Peace Negotiations Re-start Now Netanyahu is Out of The Way?

With the swearing-in of Israel’s new coalition government that ended the 12-year tenure of Prime Minister Benjamin Netanyahu, attention has now been drawn to the possibility of reviving the Israeli-Palestinian negotiations that have been halted since April 2014. 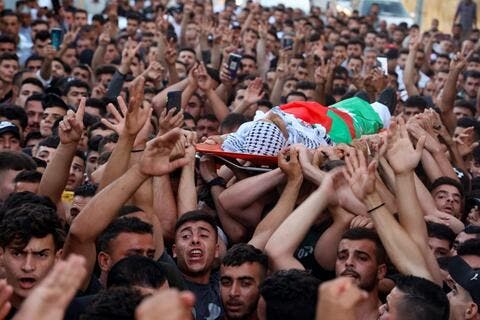 Palestinian Teen Shot in The Head Dies in Beita Town

Although the new government is expected to prioritize domestic issues, it largely ignored the Palestinian file within its political program over fears of creating fractures within a fragile coalition solely united for getting rid of Netanyahu.

Every time a new Israeli government is formed, people should remember there is no liberation under colonial rule. There is no Palestinian freedom under an occupier. Redirect your energy to past & present realities which Palestinians continue to suffer from for seven decades.

Netanyahu, now leading the opposition, has vowed to work to bring down the new government that comprises parties with conflicting political ideologies.

Bennett promised on his inauguration day to back settlement building in all areas of the occupied West Bank, including areas classified as C.

Under the 1995 Oslo Accords between Israel and the Palestine Liberation Organization (PLO), the West Bank, including East Jerusalem, was divided into three portions – Area A, B, and C – with area C under administrative and security control of Israel until a final status agreement is reached with the Palestinians.

The Palestinian leadership adheres to the two-state solution on the basis of the Arab Peace Initiative tabled at the 2002 Arab Summit in Beirut. The initiative offers full recognition of Israel by all Arab states in return for a full Israeli withdrawal from all Arab territories occupied in 1967 and the establishment of a Palestinian state with East Jerusalem as its capital.

Analysts agree that the resumption of peace negotiations most importantly depends on the US willingness to do so.

US President Joe Biden expressed Sunday his administration’s full commitment to working with the new Israeli government and to advancing security and peace for Israelis, Palestinians, and the peoples of the region.

Omar Jaara, an expert on Israeli affairs, says that the decision of war and peace in the Middle East "is not a regional decision, and it is not in the hands of any capital in the region," rather it is under the “complete control” of Washington.

"If it had not been for US President Dwight Eisenhower (1953-1961), Israel would not have withdrawn from the Sinai Peninsula in Egypt and the Gaza Strip after weeks of their occupation in 1956. And if it were not President Jimmy Carter (1977-1981), the Egyptian-Israeli Camp David Accords of 1979 would not have been possible,” Jaara said.

According to Jaara, the need for the “American will is also applicable to the Palestinian-Israeli peace process,” adding that Biden’s phone call with Bennett less than half an hour after the new government won Knesset confidence is a testament to this.

Writer and analyst Hafez al-Barghouti does not rule out a "shift" in Bennett's positions after becoming prime minister. He said the premier received a "dose of diplomacy" from Biden following their recent phone call.

Al-Barghouti thinks that Bennett will not be able to say “No” to Biden especially if the US applies pressure on the nascent government to resume talks with the Palestinian leadership, something he thinks will create divisions among the members of the coalition government because of the divergent opinions that exist on how to deal with the Palestinian file.

He said the alternate Prime Minister and Foreign Minister Lapid stated earlier that the Palestinian state should remain as it is now, without borders and without any authorities.

Al-Barghouti, however, expects Bennett, who has expressed more extremist stances than his predecessor Netanyahu, to open up to negotiations with the Palestinian leadership under US pressure.

But “how would he negotiate, with whom and on what basis?” are questions that al-Barghouti says remain unanswered.

For that reason, al-Barghouti thinks Bennett will resume negotiations “for the sake of negotiation and not to reach a result” while continuing his plans of expanding settlements and ethnic cleansing.

Antoine Shalhat, a researcher on Israeli affairs, chose to differ with al-Barghouti arguing that there are "little possibilities" to open the path of negotiations. He noted that the new Israeli government lacks the “mandate to conduct negotiations."

“Death to Arabs” is not just a chant in Israel, it’s state policy. Either ethnic cleansing through expanding settlements or massive airstrikes that wipe out entire generations of families. https://t.co/e14AsQm6YU

Shalhat said the composition of the new government with the stark ideological differences among its component "will not be able to reach an understanding to resume negotiations”.

The eight Israeli parties that comprise the new government are Yesh Atid, Labor, and Blue and White -- three centrist parties -- and three right-wing parties in the form of New Hope, Yamina, and Yisrael Beiteinu. The remaining two are the leftist Meretz party and an Arab party, the United Arab List.

Shalhat pointed out that Israel has never announced previously that it rejects negotiations but engages in negotiations when “under pressure.”

For that reason, Shalhat argues that negotiations will only be possible if the US administration “exerts real pressure” on the new Israeli government.

He, however, concurs with al-Barghouti that even if negotiations resume, the question remains “on what?” 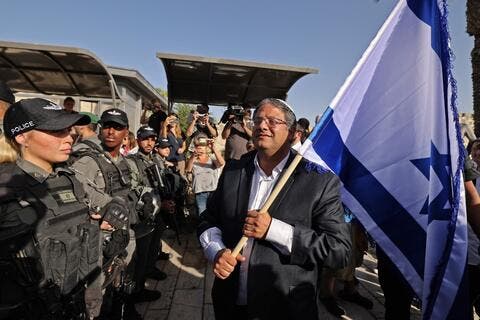 Palestinians Protest at The Israeli Flag March in Jerusalem

Shalhat also noted that the Palestinian side has a position on the negotiations which he said could be different from its “outdated form”.

For Shalhat, the Palestinian issue will prove to be the biggest test for the new coalition government.