Chen Quanguo: The Man Who Silenced Tibet Is Perfecting a Police State in Xinjiang, China 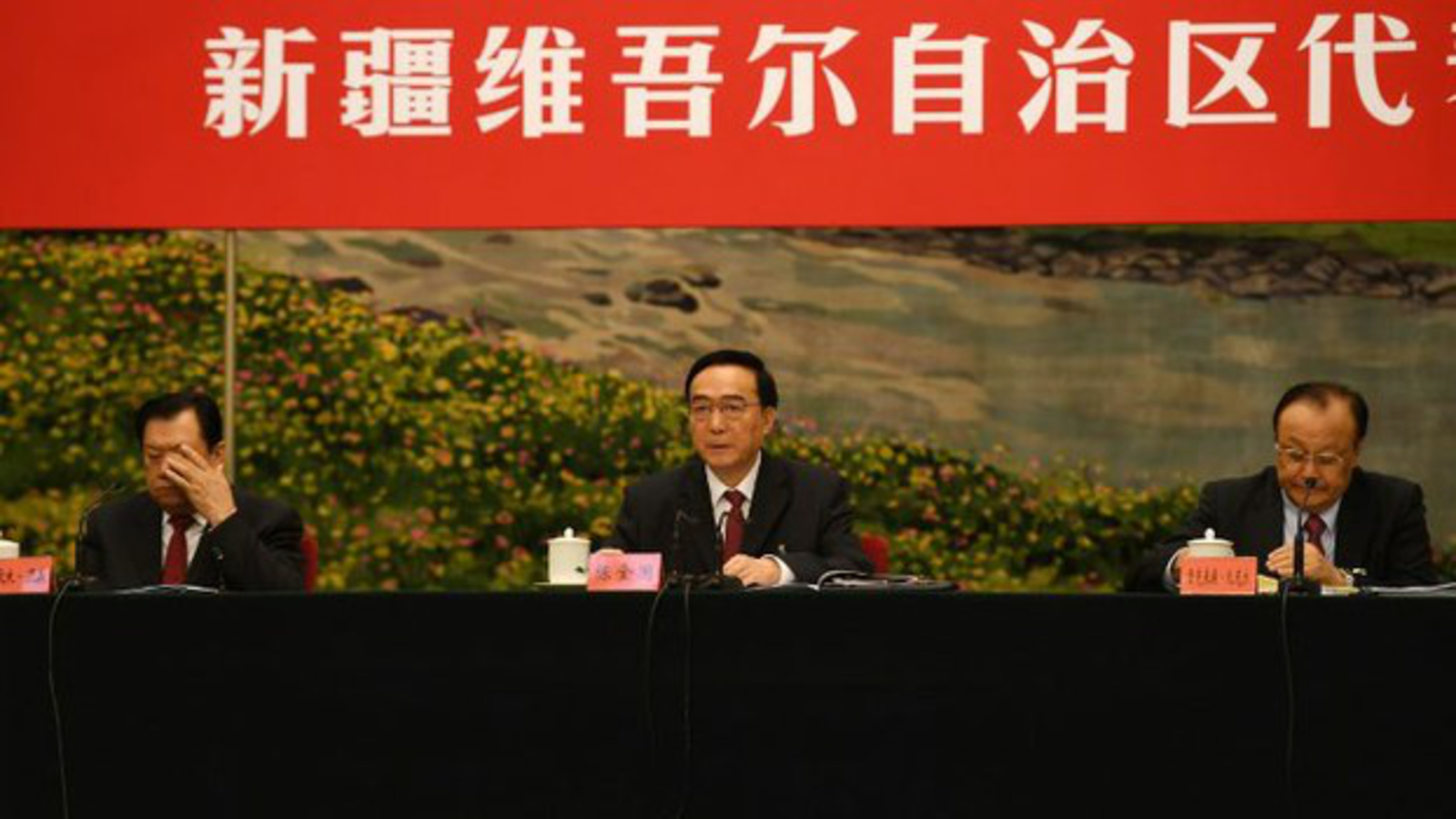 One of the most advanced and penetrative police states in the world is being deployed quietly in Xinjiang, China. The exact method of controlling Xinjiang is not a new dystopian nightmare but rather one tested and proven in Tibet and invented by one man: Chen Quanguo.

Up to a million Uyghur Muslims have been detained in extralegal ‘re-education’ camps and ‘vocational training’ centers guarded by watchtowers and high fences. Every ethnic minority is registered into a central database run by the police, and every purchase, movement or conversation deemed suspicious by the party is met by an official who interrogates the suspect. Neighbors are assigned to surveill each other.

According to Maya Wang, a senior researcher at Human Rights Watch (HRW), China wants “to mass engineer the identity of the Muslims--which are too different from Hans, from the state's perspective-- so they become loyal, obedient subjects of the CCP [Chinese Communist Party].”

But the exact method of controlling Xinjiang is not a new dystopian nightmare but rather one tested and proven in Tibet and invented by one man: Chen Quanguo.

Quanguo’s preferred method of repression is to divide up restive regions with a grid system, putting police stations near each other at regular intervals in addition to pitting households against each other in the name of counter-terrorism.

From a humble background in Henan, China, Chen Quanguo slowly worked himself through the CCP’s bureaucracy to become the Party Secretary of Tibet. He went on to govern the region for five years, between 2011 and 2016.

Tibetans have their own ethnicity, culture and language that is distinct from Han China, and was only formally integrated into the state of China after an armed dispute with the Tibet government and the Dalai Lama in the 1950s. Tibetans resisted attempts by the CCP to exert more control over the region, but their resistance crumbled under the rule of Quanguo.

Seeking to pacify Tibet entirely, Quanguo developed a strategy of surveillance that has since become a blueprint for a successful surveillance and police state. Shortly after taking power, he began to divide Tibet up using a grid-system, placing small police stations at regular intervals around the entire region to establish an inter-locked, pervasive security presence. He also assigned households to spy on each other, calling it the “double-linked household management system.”

In addition, Quanguo began constructing the flow of information. He moved to stifle independent news sources and replaced them with CCP-loyal outlets. He saturated Tibetan TV with new channels dedicated to CCP propaganda and made sure those who had satellite TVs had a fixed reception to the CCP channels.

By the end of 2016, Quanguo had built over 700 of the small police stations, which are called ‘convenience police stations,’ and maintained 81,140 ‘double-linked households’ that covered three million Tibetans.

In order to staff his new security state, Quanguo recruited over 12,000 for police-related activity between 2011 and 2016, over four times the number of police recruited during the preceding five years.

In June 2012, Quanguo ordered officials to “make sure that the Central Party’s voices and images can be heard across 120 thousand square kilometers,” and that “no voices and images of enemy forces and Dalai clique can be heard and seen.” In trying to describe Quanguo’s grid-style surveillance state, Human Rights Watch calls it a “Three-dimensional [Social Stability] Preventive Control System.”

Violence and unrest in Tibet fell dramatically. No major security incidents happened after 2012, protests dwindled and Tibet was silenced. His grid-system effectively instilled a sense of constantly being watched, and residents steadily internalized what the CCP would be present in their everyday life.

In 2016, he was assigned to be party head of Xinjiang. He wasted no time applying his grid-system to crack down on millions of Uyghur and Kazakh Muslims living in the area.

Maya Wang of HRW told Al Bawaba that “there is strong evidence to suggest that Chen Quanguo is responsible for the current crackdown in Xinjiang.”

“Although the ‘Strike Hard Campaign against Violent Extremism’ started in May 2014, many of the repressive measures associated with it were stepped up after Chen transferred from Tibet to Xinjiang,” she added.

Quanguo immediately began to replicate and even intensify strategies he had developed in Tibet, building hundreds of ‘convenience’ police stations and pitting households against one another via the  “double-linked household management system.” Because he wrote and perfected the playbook in Tibet, Quanguo was able to implement his grid-strategy in far less time in Xinjiang, taking only two years instead of five.

“When comparing figures for the two regions per capita, the available data indicates that [Xinjiang] might now have considerably more convenience police stations per capita than [Tibet],” writes Adrian Zenz and James Leibold for the Jamestown Foundation. “323 versus the [Tibet’s] 216 per 100,000 of the population.”

These mini-police stations are made of bulletproof glass and concrete; they offer some basic goods and serves while reminding residents that police have a presence on every corner. He also began hiring tens of thousands of police. Before Quanguo took power, Xinjiang only advertised about 9,000 police-related jobs. In 2016 however, that number shot up to over 32,000. By 2017, it nearly doubled to more than 60,000.

Quanguo has also overseen a state-of-the-art social ranking program that quantifies Uyghurs’ loyalty to the CCP and the Han identity as a numerical grade in addition to the mass detainment of Uyghurs, which has been the subject of most news coverage regarding his policies but is by no means the lynchpin of his suppression strategy.

James Leibold told Al Bawaba that “Chen Quanguo’s philosophy of governance can best be described as security trumps all. Since at least coming to Xinjiang in Aug of 2016, he has repeatedly stressed that ‘stability maintenance work’ is the top priority of his regime.”

“There is a long and rich history of Chinese (Han) political thought on how best to manage/deal with the ‘barbarians,’” Leibold added. According to him, Quanguo has been “drawing on this tradition, essentially adopting similar ‘carrot’ (恩, grace) and ‘stick’ (威, might) strategy in order to ‘govern,’” non-Han populations.

“What he has innovated at is new methods and tools” Leibold said, “village-based Party work teams, neighbourhood-based ‘convenient police stations’, marrying-up activates between Han and minority families, and forced, extra-judicial political indoctrination sessions/camps,” are all intended to entrap, punish and domestic non-Han minorities living in China.

How the International Community Can Respond to Chen Quanguo

The ongoing crackdown in Xinjiang has only begun to make headlines in major media outlets. U.S. officials have begun to call for action against China, and the U.N. published a report condemning China’s repression of Uyghur Muslims. Apart from this however, the international community has largely overlooked Xinjiang, even as the technology and governmental techniques developed in the region are beginning to be exported across the world.

“There has been growing international media attention on the situation of Xinjiang; some foreign governments have also spoken up about it. However, the amount of attention, and in particular, action, is inadequate,” said Wang of HRW.

“We need foreign governments to adopt a range of stronger actions, including targeted sanctions on Chinese leaders, to send a message to the Chinese government that these grave abuses have to stop.”

James Leibold however, is skeptical about the efficacy of any sanctioned targeted at Quanguo specifically. “Chen is unlikely to have any easily identifiable assets in the US, nor likely to travel there any time soon.”

In Tibet, Quanguo was allowed to invent a new type of police state with no international repercussions apart from rhetorical calls for China to investigate its own governmental policies. It remains to be seen whether the international community will meaningfully respond to his revamped Xinjiang crackdown.