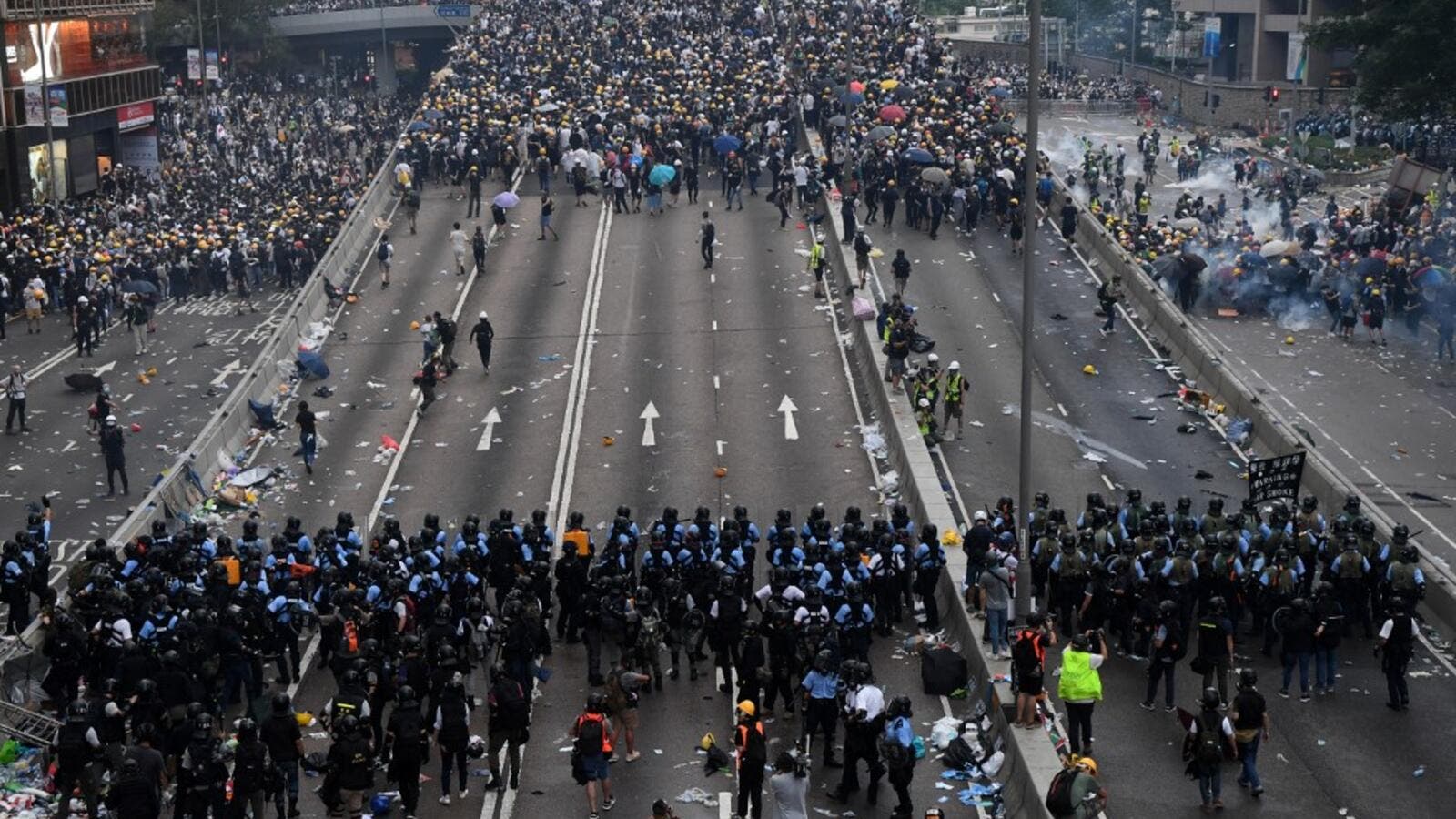 Police clash with protesters during a rally against a controversial extradition law proposal outside the government headquarters in Hong Kong (AFP)
Highlights
Despite weeks of speculation, the sources told the paper that they are certain that the use of the People's Liberation Army on the territory will be ruled out.

China's government is now working on an urgent plan to resolve Hong Kong's ongoing political crisis, according to a report citing sources familiar with the matter.

South China Morning Post reported today that the comprehensive strategy with short-term and long-term plans will be presented to Beijing's top leadership for deliberation soon, but officials have ruled out the use of military force.

While the immediate strategy will aim to resolve the city's increasingly violent protests in recent weeks, the long-term plan may lead to an 'overhaul' of Beijing's approach in overseeing the former British colony, the report said.

Beijing maintains that the situation is best left for Hong Kong officials to resolve and does not want to get directly involved, according to the report, adding that the goal of avoiding bloodshed and keeping the city 'largely stable' remain unchanged.

Despite weeks of speculation, the sources told the paper that they are certain that the use of the People's Liberation Army on the territory will be ruled out.

The officials are also considering whether the current situation is too risky for Chinese President Xi Jinping to visit Macau, another former European colony, later this year for its 20th anniversary celebrations of its return to Chinese rule, the paper reported.

It added that the Chinese leadership has been taken back by the scale and intensity of the protests.

Hong Kong's protests have drawn millions of people to the city's streets since early June and thrown the former British colony into its biggest political crisis since it was returned to China in 1997.

What began as a protest against a controversial extradition bill has ballooned into a fundamental challenge to the way Hong Kong is governed - and the role of the Chinese government in the city's affairs.

'Hong Kong is not China' has become a refrain of the movement in what is a Chinese territory, but with its own laws and a separate legal system under a 'one country, two systems' framework.

The extradition legislation would have allowed suspects to be sent from Hong Kong to mainland China, where critics fear they would face opaque charges and unfair trials. They also argued that Hong Kong's independent judicial system would be compromised under the proposed legislation.

Chief Executive Carrie Lam initially maintained that the bill would move forward, but has since declared them indefinitely suspended and 'dead.'

The protests, however, have continued unabated, as demonstrators call for Lam's resignation, the legislation's formal withdrawal and an investigation into police tactics. They also demand that protesters not be punished - as the leaders of the pro-democracy 'Umbrella Movement' demonstrations in 2014 were.

Across these issues, protesters have increasingly held up signs expressing a broader wish: a yearning for greater democracy.

Slogans such as 'Free Hong Kong' and 'Democracy Now' have become more widely used, said Antony Dapiran, a Hong Kong-based lawyer and author of a book about the city's recent protest history who has been attending the protests since they began.

'People are fundamentally saying that they don't trust the mainland Communist government,' he said. 'There's an underlying anxiety and fear in Hong Kong of what they're going to do.'

Pro-democracy sentiment has become more pronounced in recent years as Hong Kong residents increasingly feel that Beijing, under the leadership of President Xi Jinping, is encroaching on their promised freedoms.

A principal demand has been for 'universal suffrage,' which means allowing Hong Kong citizens to vote directly for their chief executive and Legislative Council. Lam was chosen in 2017 by a 1,200-person committee dominated by pro-Beijing elites.

Several events have fulled anxieties about eroding boundaries between Hong Kong and the mainland.

Five Hong Kong booksellers disappeared and ended up in Chinese custody, and the 2014 protest leaders were sent to prison. Meanwhile, China has built a high-speed rail link between the mainland and Hong Kong and plans to include both in a 'Greater Bay Area,' seen as attempts by Beijing to meld Hong Kong with the mainland.