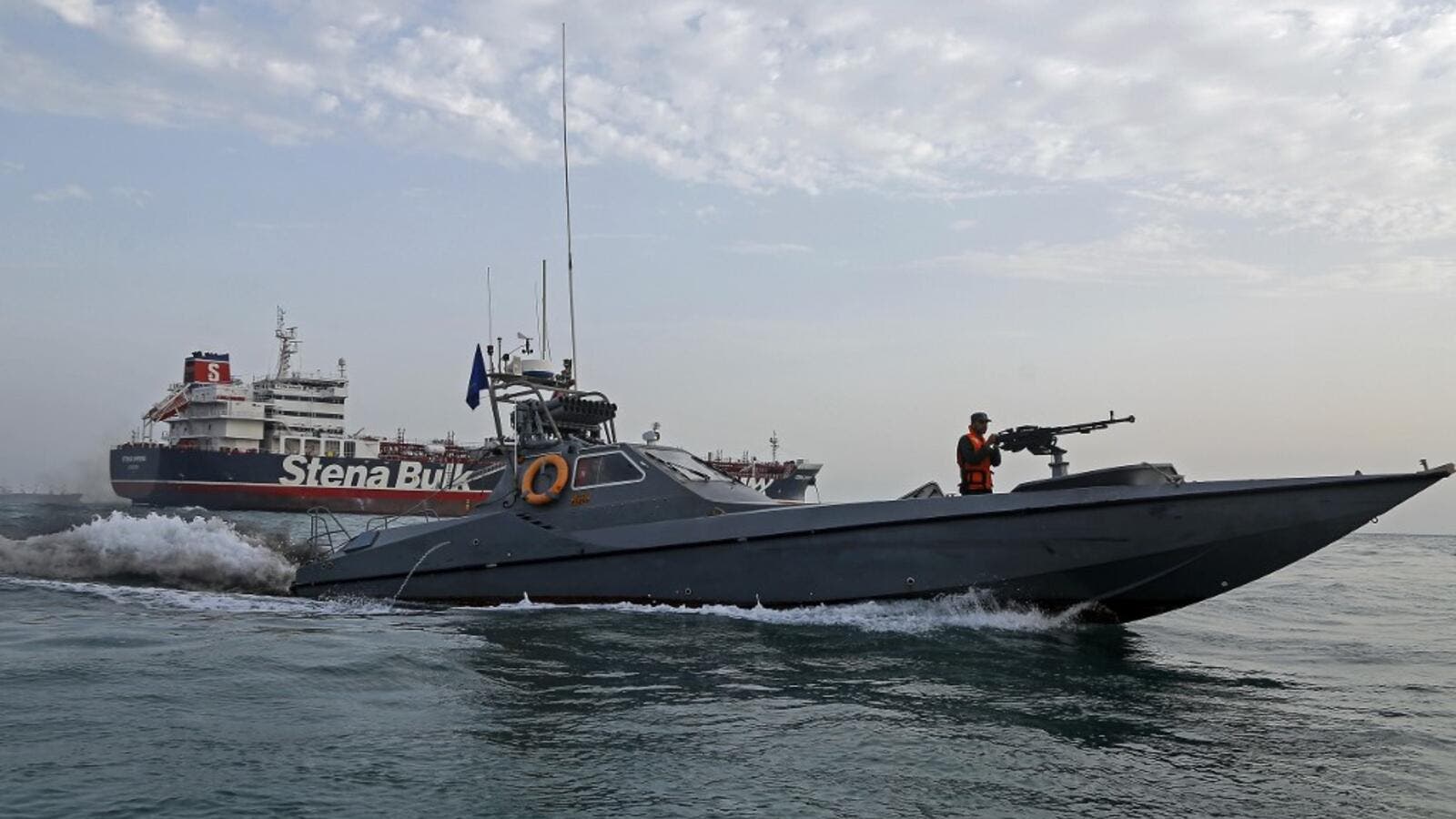 Iranian Revolutionary Guards patrolling around the British-flagged tanker Stena Impero as it's anchored off the Iranian port city of Bandar Abbas (AFP)
Highlights
Washington has yet to respond but the spy claims are likely to send tensions spiralling further.

Seventeen CIA spies have been arrested in Iran and some of them will face the death penalty, Tehran claimed today amid a worsening Middle East crisis.

Iran's intelligence ministry declared it had broken up an American spy ring and sentenced several of its members to death, according to state television.

'The identified spies were employed in sensitive and vital private sector centres in the economic, nuclear, infrastructural, military and cyber areas... where they collected classified information,' a spokesman said.

Washington has yet to respond but the spy claims are likely to send tensions spiralling further.

Iran has been feuding with the West for weeks over the crumbling nuclear deal and a series of threats to Middle East shipping, which heightened again last week when Tehran's revolutionary guards seized a British tanker in the Straits of Hormuz.

Iran captured the Stena Impero Friday in retaliation for a British Royal Marine operation two weeks ago in which an Iranian vessel was seized off Gibraltar.

Video footage released by Iran showed the  tanker being surrounded by speedboats before troops in balaclavas descend a rope from a helicopter onto the vessel.

Authorities impounded the ship on allegations it failed to respond to distress calls and turned off its transponder after hitting a fishing boat.

Its crew is made up of 18 Indians, including the captain, three Russians, a Latvian and a Filipino.

A top British representative to the UN rejected Iran's version of events, accusing Tehran of 'illegal interference' and saying there was no evidence of a collision.

In a letter to the UN Security Council, British charge d'affaires Jonathan Allen wrote that the vessel had been in Omani waters with its transponder switched on when it was approached.

It was 'exercising the lawful right of transit passage in an international strait', he wrote.

Britain has warned its ships to avoid the Straits of Hormuz, a chokepoint for about a third of the world's sea-borne oil.

UK authorities intercepted the Grace 1 on July 4, saying it was violating EU sanctions by carrying a shipment of Iranian crude oil to Syria.

A detachment of Royal Marines from 42 Commando boarded the vessel off Gibraltar in a joint operation with the Royal Gibraltar Police.

But Iran has insisted that the tanker was not headed for Syria.

Tankers in the Gulf have come under attack repeatedly in recent weeks, in explosions which Britain and America have blamed on Iran.

A UAE investigation found four mysterious sabotage attacks on May 12 were linked to a 'state actor' but did not name Iran.

The attacks were carried out with limpet mines and were 'part of a sophisticated and coordinated operation', the report found.

The tanker attacks inflamed an already tense Middle East stand-off and prompted the U.S. to bolster its military presence in the region.

Matters worsened just four weeks later when another two ships were hit by explosions in the Gulf of Oman.

Forty-four sailors were forced to abandon their ships amid a huge fireball on the MT Front Altair and another blast on the Kokuka Courageous.

America again blamed Iran, releasing a video which purported to show Iranian revolutionary guard forces removing an unexploded limpet mine from one of the ships.

Meanwhile tensions over Iran's nuclear ambitions have also been heightening as Tehran moves ever further away from its 2015 nuclear deal.

After Donald Trump quit the nuclear deal in 2018, the U.S. administration reimposed tough sanctions on Iran, which retaliated by increasing its enrichment of uranium beyond limits set in the nuclear accord.

Iran has said that it could restart deactivated centrifuges and ramp up enrichment of uranium to 20 per cent.

But Major General Hossein Salami, the head of the Revolutionary Guards, denied Iran was pursuing a nuclear weapon.

Trump called off air strikes against Iran at the last minute in June after the Islamic republic downed a U.S. drone.