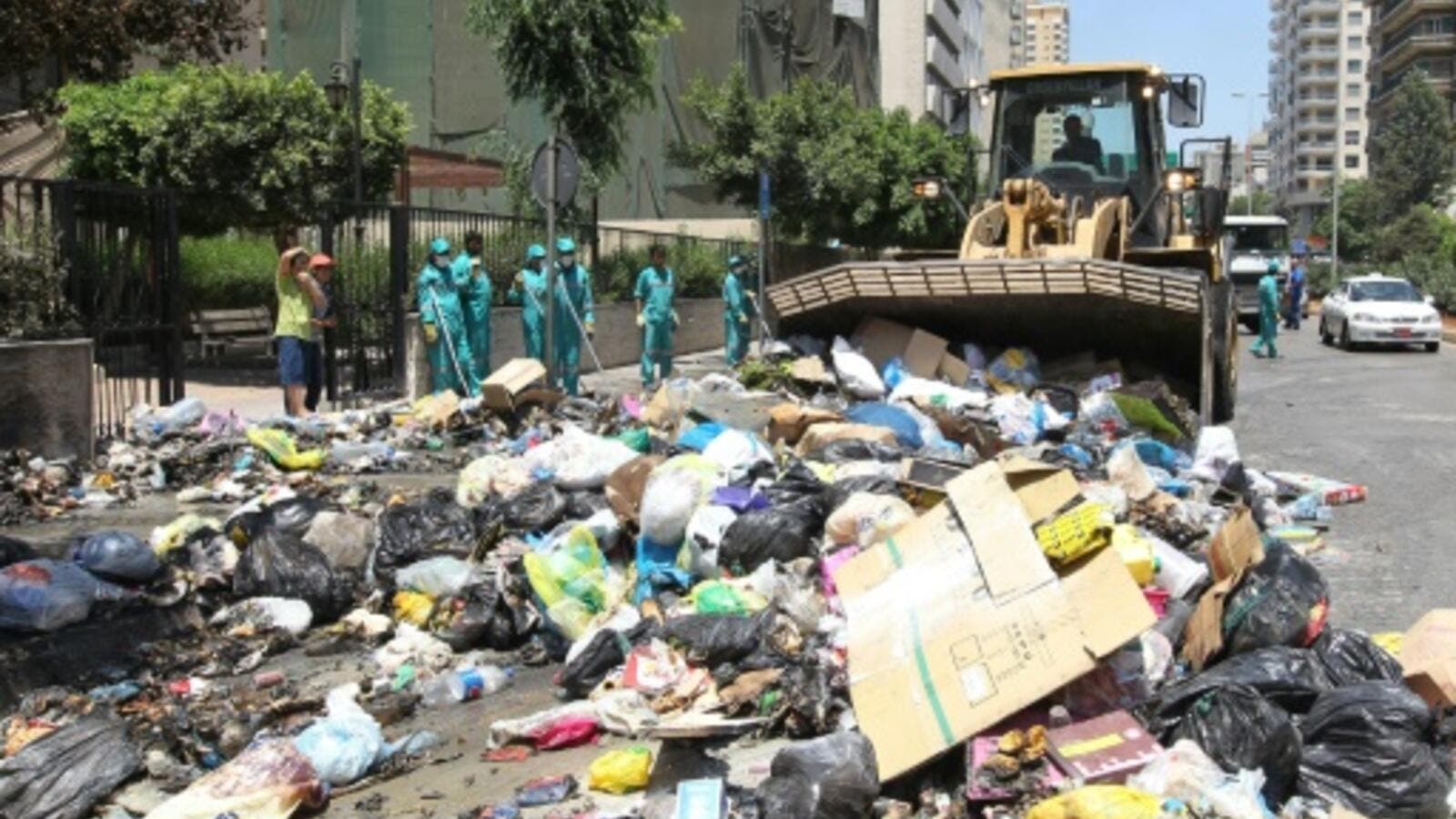 Piles of garbage in Beirut. (AFP/File)

A constant stream of trucks waited to deliver compacted trash Tuesday to a prepared space in the Choueifat’s coastal Costa Brava area, a day after the site opened amid staunch local opposition. “Monday at 7 a.m., [the trucks] started to enter the Costa Brava [site],” Pascale Nassar, communications director for Sukleen, told The Daily Star.

The baled trash is being unloaded in the area, awaiting the establishment of the Costa Brava landfill where they would be dumped.

Nassar explained that the area continued to be prepared by Sukleen, the waste contractor for Greater Beirut and Mount Lebanon, for short-term use before a sanitary landfill is established.

The trash heading to the area is new waste, the months-old garbage is being taken to the Naameh landfill south of Beirut.

“It’s like a parking space that we are preparing to temporarily welcome the new waste that we are collecting and sorting at the plants, what remains is being baled [and brought to the site],” Nassar said, adding that a similar piece of land was prepared in Burj Hammoud.

Pictures from the site in Costa Brava showed wrapped and compacted bales of trash being stacked on top each other as a constant stream of trucks arrived.

Nassar explained that the site was prepared with specific measures to protect against the consequences of the waste, however she couldn’t confirm how many trucks entered the space by Tuesday.

Cabinet last month agreed on a trash management plan to help the country solve the crisis it faced after the Naameh landfill was shut down last summer without an alternative dump site. The closure led to piles of trash growing on the streets of Beirut.

The new plan will see two temporary landfills established in Burj Hammoud-Boushrieh on Beirut’s outskirts and in the Costa Brava area, south of the capital. The Naameh landfill has been reopened for two months to take in the old waste that accumulated over the last eight months.

The plan also saw the Council for Development and Reconstruction be assigned to undertake a two-month bidding process for competent companies to take over from Sukleen in Beirut and Mount Lebanon, except around Jbeil.

It was agreed that Sukleen and its partner company Sukomi would be responsible for collecting garbage until other companies are awarded contracts. “The CDR asked us to prepare these two places so that we can temporarily welcome new waste that is being sorted,” Nassar said. “The trash is being packed in this way so that once a landfill is established, it can be transferred and placed in the landfill in Costa Brava ... currently we don’t have a landfill.”

Although the trash plan is being implemented, it continues to face opposition. Several locals have expressed their dismay at the government’s plan, saying that it goes against conventions.

Lawyer and activist Imad al-Qadi from the newly formed Choueifat Crisis Cell, said that opposition to creating a landfill in the area remained widespread.

“We are against it. We are still against, all of Choueifat, organizations, citizens and residents are,” Qadi told The Daily Star. He said that they are taking a number of measures, including legal, through what he said was an “administrative judiciary.” They are also preparing to mobilize on the ground.

“The process of creating a parking lot for the trash so that [the landfills] became a reality in the area means they’re trying to force a reality on us,” he explained.

Qadi said that the Cabinet’s decision violated two main things: The Convention for the Protection of the Mediterranean Sea against Pollution, known as the Barcelona Convention, and people’s will. “We have a decision issued by Choueifat Municipality that totally rejects the landfill and that prevents burying anything near the coast. The Cabinet forged this because the person who discussed the issue in the Cabinet did so as if there was an approval by Choueifat Municipality.”

The Crisis Cell is composed of a number of organizations and parties he said, adding that they were still at the beginning of the fight.

The activists said they didn’t try to physically prevent the trucks from entering the Costa Brava land, suggesting that the locals opted to exert pressure elsewhere. “Let the smell spread and let the Ouzai and Raml al-Aali neighborhoods smell it. Let the airport building and the travelers smell the trash.”