Turkish authorities said at least 3 people were killed on Thursday amid more than 50 forest fires were recorded in the country.

An 82-year-old man was found dead during an evacuation of the Kepezbeleni district and 62 people were hospitalized in Antalya after inhaling smoke and sustaining burns from the blazes.

a thread about whats going on in turkey

in one of antalya’s district, manavgat, 4 forest fires started in different places of it. and 3 people passed out bc of the fires pic.twitter.com/M2wos27UGM

Pakdemirli said a total of 53 forest fires were recorded on Wednesday and Thursday in the Mediterranean and southern Aegean regions but said most of them have since been brought under control.

Authorities evacuated 18 villages and Volkar Hulur, district governor of Akeski, said 80% of the homes in the Kepezbeleni neighborhood had burned down.

Pakdemirli said 10 blazes remained active and more than 1,832 fire personnel had been deployed to combat them.

The cause of the fires were under investigation but Fahrettin Altun of the Turkish president's office said "those responsible will have to account for the attacks against nature and forests."

WATCH: Massive forest fires destroyed at least one village in southern Turkey and forced four other neighbourhoods to evacuate, as residents banded together to try and save their properties and belongings. pic.twitter.com/1vCRzB0pyX 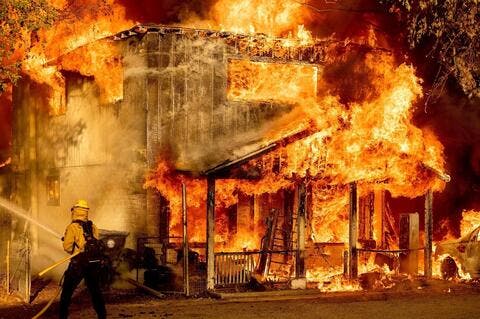 Turkish President Recep Tayyip Erdogan also pledged that the government would work to assist victims of the fires.

"All necessary support will be given to our citizens who have suffered from the fire," Erdogan said.